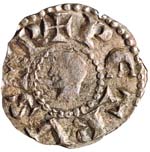 Coin ( Denaro Segusino ) of Peter I.

He was the eldest son of Count Otto of Savoy .

He was strongly influenced by his mother Adelheid von Turin and married Agnes von Poitou († 1089), probably daughter of William VII of Aquitaine and widow of Ramiro I of Aragón .

This marriage had two children:

After his death in 1078, his younger brother Amadeus became Count of Savoy.