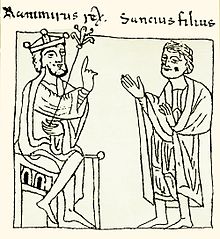 Ramiro I (left) and his son Sancho Ramírez (right) in a depiction from the 13th century.

Ramiro was an illegitimate son of King Sancho III. of Navarre and the Sancha of Aibar. A certificate from his father dated October 21, 1022 suggests that he was his second son. His half-siblings were:

The kingdom of Aragon (green) under the rule of Ramiros I.

After the death of his father in 1035, Ramiro received the former county of Aragón from his extensive inheritance, which originally belonged to the Spanish mark of the Franconian Empire , but had been annexed by the Pamplona kings a few generations ago. Their territory corresponded roughly to that of today's Comarca Jacetania , i.e. the land around the main town Jaca . Apparently there were different opinions regarding Ramiro's status, especially regarding his relationship to the oldest legitimate brother García III. who was presumably assigned the role of family senior by the father. In any case, Ramiro regarded himself, like his other brothers, as an independent king, with which title he first named himself on the occasion of his first marriage on August 22, 1036. In a document from Garcías from the year 1048, however, he is only referred to as a "so-called king" (quasi pro rege) in a clear distinction to the other brothers .

The relationship between Ramiro and García was apparently fraught with conflict from the start, with the former revolting against the latter's dynastic seniority and the associated political subordination. In 1043 Ramiro finally started a war with García, against which he allied himself with the Moorish kings of Huesca , Saragossa and Tudela . However, he quickly lost the war to his defeat at the Battle of Tafalla . As a result, to the west in its place, Ramiro directed his expansion efforts in other directions. First he was able to take advantage of the murder of his brother Gonzalo in 1045 and permanently annex the Sobrarbe and Ribagorza landscapes, which border on Aragón to the east . On August 16, 1045, he was able to authenticate for the first time with a correspondingly extended title. In 1054, Ramiro was also able to benefit from the death of his brother García, who had died against Ferdinand in the Battle of Atapuerca, by placing his nephew Sancho IV under his protection and being rewarded with the cession of some castles.

After that, Ramiro turned his attention south towards the Moorish al-Andalus , where he sought to gain land , especially at the expense of the Taifa kingdom of Zaragoza . The aim here was to secure positions in the Pre-Pyrenees region along the Vero up to its confluence with the Cinca at Barbastro , from where the further advance into the Ebro Valley could take place. However, here he came into conflict with his youngest brother Ferdinand , who had meanwhile established himself as King of León-Castile and also raised a claim to supremacy over all Spanish empires, including the Moorish ones. In view of the threat from Aragon, the king of Zaragoza, al-Muqtadir , felt compelled to voluntarily become Ferdinand's vassal in order to receive this protection. When Ramiro launched an attack on the border town of Graus am Vero in the spring of 1063 , al-Muqtadir and his troops met him. Among the Moorish warriors was a group of Castilian knights led by Ramiro's nephew Sancho . In the Battle of Graus , the Moorish army proved superior and Ramiro fell. According to the tradition of Al-Turtūshī (Sirāj al-mulūk) , he was killed by a Moorish warrior who disguised himself as a Christian knight was able to smuggle into the Aragonese camp. He was buried in the Abbey of San Juan de la Peña .

In his first marriage Ramiro was married to Gisberga-Ermensinde, a daughter of Count Bernhard Roger von Foix - Bigorre († 1049), from 1036 . The marriage contract was drawn up on August 22, 1036 in San Juan de la Peña. Your children were:

In his second marriage, he was married to Agnes, one of the daughter of Duke Wilhelm VII of Aquitaine († 1090), from around 1054 . This marriage remained childless.

With an unknown woman named Amuña he had an illegitimate son, Sancho Ramirez, Lord of Aybar. This is documented as the eldest son of Ramiro.

The sign (Fig. 1), with which Ramiro I attested most of his documents, was retrospectively applied from the 14th century as a silver cross, heraldically applied to the top right of a blue shield, recognized as the coat of arms of the first royal dynasty of Aragon (Fig. 2). The historian Jéronimo Zurita (Anales de la corona de Aragón) identified this sign of the cross with the legendary "Cross of Iñigo Arista " (Fig. 3), which is said to have appeared to him as a divine sign in the sky during a battle against the Moors. Today this coat of arms is part of the coat of arms of the Spanish region of Aragón (Fig. 4).

Commons : Ramiro I.  - Collection of images, videos and audio files