The medieval monastery is located southwest of the city of Jaca , in a narrow gorge, under a protruding mountain overhang of the outer Pyrenees , the Sierra San Juan de la Peña, which was declared a protected landscape area in 1920 . The mountain overhang opens roughly to the north, so that the system hardly receives any direct sunlight. This location under a rock overhang is unique. The surrounding rock is a very soft conglomerate that favored the washing out of caves and the formation of overhangs, but in which it was also very easy to dig caves. 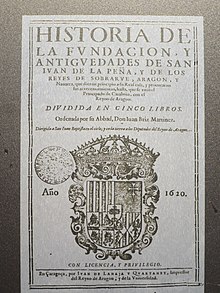 Visigoths fled to this mountainous, inaccessible area when the Visigoth Empire collapsed during the Muslim conquest of Spain from 711 onwards. They built a fortress here, but the Arabs destroyed it again in 734. In the following years, several fled here and lived in a loose community that existed until the beginning of the 10th century. García Íñiguez , King of Pamplona, ​​and Galindo I. Aznárez , Count of Aragón, were great patrons of the hermitage in the 9th century.

In 920 the area was conquered by Galindo Aznárez II , who had a small monastery built on this site, which was dedicated to a saint Julian and a saint Basilisa. The Mozarabic lower church has been preserved from this period . At the beginning of the 11th century, Íñigo von Oña , who was later canonized, spent some time here as a monk. King Sancho I then founded the monastery consecrated to John the Baptist . Construction began in 1026. In 1028, the Benedictine rule was introduced for the monastery . On March 22, 1071, the Monastery of San Juan de la Peña was the first place in Spain where the Roman rite was introduced. It replaced the Visigothic rite . No later than 1071 and that was a rule of Cluny introduced. The mighty and strengthened abbey found itself in a violent dispute with the Bishop of Jaca at the end of the 11th and beginning of the 12th centuries . In the process - common in those days - numerous documents were forged. Because of this and the loss of documents at a later date, it is difficult to make precise statements about the early history of the monastery.

San Juan de la Peña was then a center of science and culture in Aragon. The scriptorium of the monastery was particularly important . During this time, among other things, a 194 sheet copy of the Bible on parchment , the oldest surviving Bible manuscript from Aragon, was created here.

King García Sánchez I of Navarre granted the monks the right to jurisdiction, and his successors to Sancho Garcés III. further promoted the monastery. A large part of the buildings that still exist today were built under his rule. The cloister was added in the 12th century.

At the end of the 11th century, under the reign of Sancho I , the monastery attained its greatest importance and also became the burial place of the kings of Aragon. 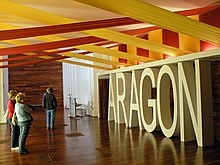 Center for the History of the Kingdom of Aragon

Two fires, in 1494 and on February 24, 1675, caused great damage, the latter lasting three days. Because of the unfavorable location of the old monastery, after the second fire it was no longer built on the historical site, but about 100 m higher, on the plateau of San Indalecio above the overhang , which was climatically more favorable and also offered a lot more space. The structures of the new monastery were again badly damaged in the Spanish War of Independence in 1809 when French troops set them on fire. The monks then began to restore the facility. However, on August 16, 1835 - like all other monasteries in Spain - the monastery was secularized by the state . The facility fell into disrepair due to insufficient building maintenance and unsuitable use and was only partially restored at the end of the 19th century.

The church of the monastery is two-story, the two levels are not directly connected. Each of the levels forms its own church space.

The lower church is the oldest surviving part of the monastery building. The Mozarabic lower church was built by 920 or shortly thereafter. It has two aisles with two apses . Remnants of Romanesque painting from the 12th century have been preserved there. The painting in the left apse shows the martyrdom of Saints Cosmas and Damian . In front of the lower church is the dormitory of the monks, the so-called "Council Hall". He joined in the 11th century.

The upper church dates from the second half of the 11th century when the monastery was expanded. It was consecrated to John the Baptist on December 4, 1094 . It has a single nave and closes with three apses, some of which are cut into the mountain. The apses were only added in a second construction phase, which followed the consecration in 1094. The ceiling of the church is partly formed from the rock. The church is only lit by windows on the west side. The exit to the cloister is through a gate in Mozarabic style. She is said here of the lower church translocated to have been, but perhaps it is also the only remnant of a upper church from the time before here today upper church was built. The gate bears an inscription in Latin (added later) .

The cloister from the 12th century lies entirely under the rock overhang. As a result, it was never covered. Above the arched position, round arched arcades on twin columns , the building ended. The rock overhang provided weather protection.

There are two chapels in the area of ​​the cloister:

The capitals of the cloister are outstanding works of art from the Romanesque period. However, the cloister has been restored so often that the original sequence of capitals is unknown today. Different groups can be identified:

The capitals with images show the following motifs:

The royal tomb (" Panthéon ") of San Juan de la Peña is also a two-storey complex. Early Aragonese counts, kings of Aragon, and kings of Navarre who ruled Aragon were buried there over a period of five centuries. Among other things, the first three kings of the Ramirez dynasty of Aragon, Ramiro I , Sancho Ramírez and Peter I lie here together with their wives.

The basement in which the burials took place was archaeologically excavated and is now presented to visitors in this excavated state. The corpses of the kings lay in stone sarcophagi in a rock chamber. The outer wall of the crypt is adorned towards the inner courtyard by a frieze with double arches. In the arches there are individually designed "gravestones", which only show symbols and ornaments, no lettering, no names.

The upper floor of the crypt, a memorial room, was built into the former sacristy of the upper church, which dates from the 11th century. The current, baroque design of the upper floor was in 1770 under King Karl III. arranged by Spain. On the left there are four stucco reliefs with scenes from the history of Aragon. The model for the design was the burial place in the Real Sitio de San Lorenzo de El Escorial .

Next to the lower level of the crypt - accessible from the courtyard - there is a room that is used as a museum. Further exhibition rooms are located on the opposite side of the courtyard.

The baroque complex on the plateau

The new monastery was built on the high plateau above the old monastery in baroque style and mainly made of brick , because there was little suitable natural stone in the area and after the major fire, great importance was attached to fire protection. The monastery was completed in 1714, richly furnished and laid out with many outbuildings, of which almost nothing is left today. Due to the Spanish War of Independence and the secularization of the monasteries at the beginning of the 19th century, there is not much left of it today. The baroque monastery complex was restored at the end of the 19th century under the Aragonese architect Ricardo Magdalena (1849–1910) and declared a protected monument on August 9, 1923.

The monastery archive was damaged in the fire in 1675. Most of the documents that have been preserved are now in the National Historical Archives in Madrid , there in the spiritual department. The stock is divided into three large groups:

Founding legend of the monastery

Legend has it that a young nobleman, Voto (in some versions "Oto"), hunted in this place and came across a deer. He followed the prey and fell into the abyss when he reached Mount Pano. But his horse landed gently and safely at the foot of the ravine and the hunter was unharmed. According to another version, John the Baptist is said to have appeared to him warning him and thus saved him from falling into the depths. In any case, Voto discovered a small cave at the foot of the mountain wall, in which he discovered a hermitage dedicated to St. John the Baptist. There he found the body of the hermit Juan de Atarés . Impressed by the miraculous rescue and the discovery, he went to Saragossa , where he sold his property together with his brother Felix. Both moved into the cave as hermits. The relics of Voto and Felix are venerated in the Cathedral of Jaca .

Founding legend of the Kingdom of Aragon

Legend has it that the founding of the Kingdom of Aragon is moved to the monastery cave of San Juan de la Peña, where the Christian warriors, together with Voto and Félix, are said to have decided on shout to appoint Garcí Ximénez as their leader, who will take them into the battle for led the land of Jaca and Aínsa. 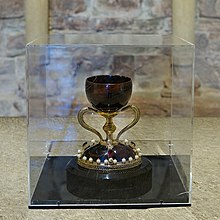 A legend tells that the Holy Grail , mentioned in a document from 1071, was kept in San Juan de la Peña . He was brought to Zaragoza in 1399. Today it is identified with the Santo Cáliz on display in the Cathedral of Valencia .

Navigation bar for the Way of St. James "Branch route to the Camino Aragonés "