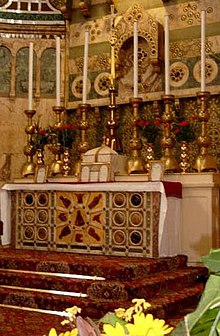 The Roman rite was initially only celebrated in Rome. Over the centuries, the Roman rite has also spread to the countries that referred to the Pope as head of the Church. In addition, local traditions arose (e.g. in France: Gallican rite , the Ambrosian rite in Milan, in England: Sarum custom , originated in Salisbury ).

Before the pontificate of Gregory the Great (590–604) there were many changes to the Roman rite, including a "complete redesign of the canon". A fundamental revision of the rite took place under Pope Gregory , which "removed a lot, changed a little, added a lot".

Towards the end of the eighth century, Charlemagne ordered the use of the Roman Mass rite in his domain. North of the Alps, some elements of the previously used Gallican rite were combined with the Roman rite. Under the influence of the successors of Charlemagne, this Roman-Frankish mixed rite was later introduced in Rome and thus decisive for the Latin Church.

Liturgical reform according to the decision of the Council of Trent

The Reformation not only criticized existing abuses of worship, but also denied the traditional Catholic doctrine of the mass sacrifice of the Eucharist . From the point of view of the Council Fathers of the Council of Trent (1545–1563), both of these made it necessary to standardize the liturgy in order to ensure the validity and dignity of the celebrations. Due to time constraints, the council entrusted the creation and publication of the Reformed liturgical books to the Pope in Rome. According to the decision of the Council of Trent, all books of worship were revised and officially published in the following decades. Under Pope Pius V the missal appeared in 1570 under the title Missale Romanum (formerly: Missale secundum consuetudinem Romane Curie ). According to the Bull Quo primum tempore , the oldest manuscripts and missals available at the time were used for this print in order to remove deformations and to restore a version that was as true to tradition as possible from the time before the unrest of the Reformation ( restituere ). In fact, this is merely a revision of the Missale curiae , the missal of the Roman Curia , of which around 300 editions were printed between 1474 and 1570. The Missal Romanum Pius V was declared binding throughout the (Western) Church, only dioceses and orders that had had their own diocesan or religious liturgy for at least two centuries were allowed to continue to use their special worship books. Translations into various national languages ​​were also preserved ( Old Slavonic rite ) or were approved for the first time in the following years (e.g. into Persian, Ethiopian and Chinese). With and after the Council of Trent, the pastorally motivated rule prevailed in Catholic church building since the 16th century to enable the faithful to have an unobstructed view of the liturgical events at the main altar (e.g. by removing the existing rood screen ). The so-called folk altar , which became widespread in the 20th century, follows this tradition.

The liturgical reform of Tridentine differs from that of the 20th century mainly in its small size and less advanced knowledge of the history of liturgy, especially about the worship of the early and Eastern churches . The liturgical books were revised and improved several times by the subsequent popes, and some of them were adapted to the requirements of the time. Significant changes to the Roman Missal before the Second Vatican Council were those made under Pope Pius XII. (1939–1958) carried out the reorganization of the liturgy of the Easter Vigil and the Holy Week as well as the by Pope John XXIII. (1958–1963) published the under Pius XII. prepared Codex Rubricarum . The Editio typica of the Missale Romanum from 1962 is based on this (see also: Tridentine Mass ). With the motu proprio "Rubricarum Instructum" Pope John XXIII wrote. the exclusive use of this newly designed Missale Romanum and suspended the previous Rubricae generales des Missale Romanum with effect from January 1, 1961. He expressly revoked any conflicting privileges, indulges and customs "etiam saecularia et immemorabilia", that is, "even if they have existed for centuries or since time immemorial".

However, a growing liturgical renewal movement that began in the 19th century called for more profound reforms. These only became possible through the Second Vatican Council (see below).

On December 4, 1963, the Second Vatican Council proclaimed in its Constitution on the Sacred Liturgy ( Sacrosanctum Concilium ):

“The ordinance of the Mass is to be revised in such a way that the real meaning of the individual parts and their mutual connection become more clearly apparent and the pious and active participation of the faithful is facilitated. Therefore the rites should be made simpler while faithfully preserving their substance. What has been duplicated or inserted less successfully over the course of time should be omitted. Some things, on the other hand, which have been lost due to the unfavorable times, should, as far as it seems appropriate or necessary, be restored according to the time-honored norm of the fathers . So that the table of the Word of God may be prepared richer for the believers, the treasury of the Bible is to be opened further so that within a certain number of years the most important parts of the Holy Scriptures are presented to the people. "

Almost all the bishops assembled in the council considered a liturgical reform to be urgently needed. Probably the most obvious changes brought about by the liturgy reform are the possibility of celebrating Mass in general in the vernacular and the desire for the laity to actively and consciously participate in the liturgy .

Pope Paul VI after the council ordered the implementation of the liturgy constitution and thus the publication of a new missal. On Maundy Thursday 1969, he promulgated the publication of a new edition of the Roman Missal , which appeared in 1970 and the Editio typica Johannes' XXIII. of 1962 and the Ordo missae of 1965. In the Apostolic Constitution "Missale Romanum" Paul VI declared:

"Our orders and regulations should be valid and legally binding now and in the future, with the repeal of any conflicting constitutions and ordinances of our predecessors as well as all other instructions of whatever kind."

In the Apostolic Letter Sacramentum Caritatis (2007) Pope Benedict XVI recommends a wider use of Latin in mass celebrations at international events. In addition, “the faithful should generally be instructed to know the most general prayers in Latin and to sing certain parts of the liturgy in the Gregorian style .”

In 1988 Pope John Paul II promulgated his own variant of the Roman rite for the dioceses of what was then Zaïre - the so-called Zaïric mass rite .

In addition to the ordinary form ( forma ordinaria ) of the Roman rite, which is associated with the Popes Paul VI. and John Paul II promulgated liturgical books in Latin and in living languages, priests and associations of priests may under certain conditions also celebrate the liturgy of 1962 - as an extraordinary form ( forma extraordinaria ) of the Roman rite ( Tridentine mass ). With the Apostolic Letter Summorum Pontificum (2007), the application of the forma extraordinaria was made the responsibility of the local bishops and the Pontifical Ecclesia Dei Commission.

In Roman Catholic parishes of the three personal ordinariates with “ Anglican Use ”, the missal Divine Worship: The Missal from 2015 is used instead .

The process and the form of the Holy Mass (also called Holy Office or Holy Eucharist ), as it was originally celebrated in the Old Catholic Church in Germany , was a largely true vernacular rendering of the Roman rite in its Tridentine until the 1980s Form until the structure of the old Catholic Eucharistic celebration was adapted to the post-conciliar Roman Catholic liturgy through a liturgical reform under the aegis of the then chairman of the Liturgical Commission, the dean and later Bishop Sigisbert Kraft .