This article deals with the sign of the cross in the Christian liturgy. For the characters see cross (characters) 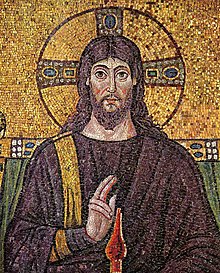 Mosaic in the Basilica of Sant'Apollinare Nuovo in Ravenna. The hand of Christ is raised in blessing with the sign of the cross.

The sign of the cross ( Latin signum crucis ) is a ritual that is practiced in most denominations. In Christianity , the cross is a triple symbol. It is a sign for Jesus Christ , for his suffering and death , his resurrection , and thus for faith itself.

The sign of the cross spans the person who is praying and is thus a symbolic expression of the belonging of the whole person - with body and soul - to Jesus Christ. Furthermore, the belief in the Triune God should be expressed. It is both praise to God and prayer for his gifts.

The Church writer Tertullian called at the beginning of the third century, the sign of the cross as an example of an ancient Christian custom that still does not in the Bible is mentioned; in doing so he turns against the view that all the customs of Christianity can be derived from the biblical scriptures.

In the eighth century there was a custom of crossing yourself with two fingers, the index and middle fingers. The sign of the cross has since been shaped from the forehead to the chest. The use of two fingers may symbolize the divine and human nature of Jesus Christ. At the same time, the shape of the cross with three fingers, thumb, index and middle finger, as a symbol for the Trinity, developed . This has been the predominant form of the cross in the Eastern Church since the 13th century .

Most Christian denominations use the sign of the cross, but in different forms.

The Catholic Church knows the small and the large sign of the cross. The great sign of the cross is made with the outstretched fingers of the right hand. The person praying touches the forehead, the chest, then the left and right shoulders. He says: “In the name of the Father and the Son and the Holy Spirit. Amen. "( In nomine Patris, et Filii, Spiritus Sancti. Amen. Et ) ( Mt 28:19  Eu ) The sign of the cross has its liturgical place in the celebration of Mass in word worship and devotions as well as hours of prayer at the beginning and at the final blessing. The prayer of the rosary begins with the sign of the cross, and Catholics cross themselves with holy water in remembrance of their baptism when entering or leaving a church. The gesture of blessing by the priest or deacon , as well as the sprinkling of holy water during blessings and ordinations, is done by striking the cross.

With the small cross sign, a cross is drawn over the forehead, mouth and chest with the thumb. In the liturgy , before the gospel is presented, it is expressed that the believer wants to understand, proclaim and internalize the word of God or that God should bless thinking, speaking and acting. The baptized person is blessed with the small sign of the cross at the beginning of the baptism celebration; at confirmation and ordination , the anointing with chrism also takes place in the form of a cross. 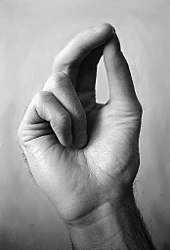 Finger position when signing the cross according to Byzantine tradition

In the Orthodox Churches (the Eastern Churches of the Byzantine and Alexandrian rites) the thumb, index and middle fingers are folded and stretched out when the cross is made; Ring finger and little finger touch the palm of the hand. The three outstretched fingers symbolize the Trinity , the two curved fingers the two natures of Christ as well as his first coming and his expected second coming . The sign of the cross is drawn from the forehead over the chest to the shoulders, whereby, in contrast to the form common in the Catholic Church, first the right and then the left shoulder is touched. The old Russian Orthodox stretch only two fingers and bend the other three. It is also possible to just extend the index finger and bend the other fingers, which is a common occurrence among the ancient oriental .

Crossing oneself is less practiced in Protestant churches today. Evangelical Christians, however, do not reject it. This is how Martin Luther writes in the Small Catechism about the morning and evening blessings :

“In the morning, when you get out of bed, you should bless yourself with the sign of the Holy Cross and you should say: 'Let God the Father, Son and Holy Spirit rule it. Amen.'"

“In the evening, when you go to bed, you are to bless yourself with the sign of the holy cross and you are to say: 'Let God the Father, Son and Holy Spirit rule this. Amen.'"

Crossing oneself with the cross occurs today only in exceptional cases in the area of ​​the Evangelical Church. The pastor's sign of the cross is widespread in practice at the final blessing, at the Lord's Supper over the elements, sometimes at baptism or other rites. Protestant advocates of the cross indicate that the word "bless" comes from the Latin signare (provided with a sign); so that the sign of the cross consciously underlines the act of blessing. Above all, the expressiveness speaks for the sign of the cross.