The title of this article is ambiguous. Further meanings are listed under Old Church (disambiguation) . 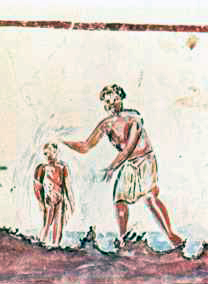 Baptism representation from the Catacomb of Calixtus in Rome

The term old church , also early church and early Christianity , denotes the first centuries of church history up to about 500; This delimitation of epochs is linked to the delimitation of the subject areas of the chairs for ancient church history and middle and modern church history . The use of the term “ church ” is to be viewed critically, since the early Christians were still a very heterogeneous movement, in which appropriate forms of organization were only established in the middle of the 1st century AD.

Chancel in early Christianity (around the year 250), in the imagination of the organizers of the Orientalis Museum Park

The fish , a common symbol in early Christian art

There are various proposals for limiting the historical period known as the old church . In most cases, it is understood to mean the epoch before the split of the ancient oriental churches , i.e. also before the theological divergence of the Orthodox and Roman Catholic churches . The theological developments, the ecumenical councils , the saints and church fathers of this time are therefore recognized in all major denominations .

The time of early Christianity , the time of the apostolic fathers , the apologists , the early Christian martyrs , the church fathers, the imperial church after the Constantinian change (see also late antiquity ) and the first four ecumenical councils up to the council of are generally counted as part of the epoch of the old church Chalcedony 451.

For the western church, the epoch of the old church is often reckoned up to the fall of the Western Roman Empire , according to some authors also up to Gregory the Great (540–604), the last church father of the West, who is also recognized in the Eastern Church.

There are various names for church history in the time of the old church, some of which overlap:

During the time of the old church, the development from early Christianity to the episcopal church and then to the five patriarchates : Alexandria, Antioch, Jerusalem, Constantinople and the West. Up until the beginning of the 4th century, the bishops mainly exchanged letters. After the change in Constantine, “a lively synodal activity developed”, especially since the bishops were now able to use the cursus publicus , the imperial post.

The beginnings of monasticism , the emergence of the first monasteries in Egypt, the rules of the order of St. Basil and Benedict .

The New Testament canon and the generally accepted creeds emerged in the time of the old Church . Theologically and philosophically, the time corresponds to patristicism . There are major conflicts of this time with Gnosis , Marcionism , with “Hellenism” ( apologists ), with regard to Christology ( Arian conflict , Nestorian conflict ) and with regard to ecclesiology ( Donatism ).

For Mack (1995) a distinction must be made between the Christ cult and the Jesus movements . The former focused on the meaning of the death and fate of Jesus, particularly the resurrection. To the extent that the focus was on the death of Jesus Christ, the focus was less on his teachings (see list of parables of Jesus , source of logia Q , Gospel of Thomas ) and on being part of a school within the Jesus movement. In early Christianity, the increasingly complex confrontation with ideas of martyrdom, resurrection and the transformation of Jesus into a divine, spiritual presence began. In Paul of Tarsus , the Christ cult was formed by God or a divine being choosing to incarnate in an ordinary person ( Rom. 3 : 3  EU ), whose God-willed execution in the form of the crucifixion would reconcile the world with God by being with the mortal , the body accommodating divine beings at the same time eradicates human sin and thus paves the way for the personal redemption of all human beings.

Theology and history of dogma