The title of this article is ambiguous. Further meanings are listed under Suda (disambiguation) . 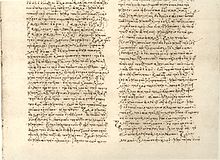 One page of the Suda in the manuscript Rome written in 1205, Biblioteca Apostolica Vaticana , Vaticanus graecus 1296 (fol.193r) 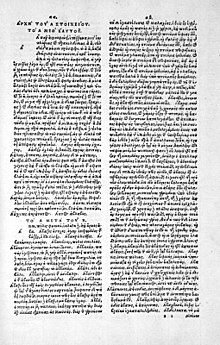 The Suda ( Middle Greek ἡ Σοῦδα hē Soûda , German 'the bulwark' ) is the most extensive surviving Byzantine lexicon ; it was probably made around 970. It was originally attributed to an author named Suidas .

The Suda contains over 30,000 lemmas and is - in contrast to most other reference works of the time - arranged alphabetically. It can therefore be interpreted as a very early forerunner of modern lexicons or encyclopedias .

The Suda contains numerous articles on the life and works of ancient and early medieval authors, as well as on ancient historiography and geography . There are also articles from philosophy , science and literary history . The content is sometimes unreliable, since a lot has apparently been quoted from memory and the sources used (including comments and writings by the grammarians ) were themselves unreliable. Since the lexicon quotes many lost works, it is nevertheless an irreplaceable source for classical philology . It was already widely used in Byzantine times and the Renaissance .

The humanistic philologist Justus Lipsius or Denis Lambin is ascribed the sentence: pecus est Suidas, sed pecus aurei velleris ("Suidas is a sheep, but a sheep with golden wool").

The work was probably compiled by several authors, for example from older, mostly lost, antique encyclopedias by Eudemos of Pergamon , Helladios , Longinos , Eirenaios of Smyrna and Pamphilos of Alexandria , as well as from scholias on works by classical authors such as Aristophanes , Homer , Sophocles and Thucydides and Lukianos .

Recent research suggests that more recent models may have been used, such as the synagogue ( Συναγωγὴ λέξεων χρησίμων ) and harpocration . The references to ancient historians probably also do not go back to the original texts, but mainly to Constantinus Porphyrogennetos .

Today the work is usually cited as Suda . It was ascribed to an author named Suidas (also Souidas or Soudas ) until about 1930 (and in part until today) , but no author by this name is known. It is therefore very likely that the word Suda (erroneously read as Suidas ) in the manuscripts is the title of the work, not the name of an author. This error probably goes back to Eustathios of Thessalonike . The title Suda probably means "entrenchment" or "fortification": The lexicon should therefore probably serve as a "fortress of knowledge" or as a "fortress against oblivion".

The Suda is partially available in digital form. Since January 1998 an international group of scientists has been developing the web-based edition Suda On Line (SOL). The translation and commentary is under the Creative Commons Attribution-NonCommercial-ShareAlike license .