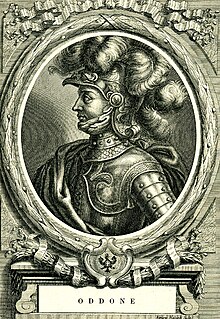 Otto von Savoyen , also written Oddo (* around 1021 ; † 1060 ) was Count of Savoy and Margrave of Susa-Turin and the youngest son of Humbert I and his wife Anzilla, née. from Lenzburg .

Otto had his own coins minted against the will of the Bishop of Maurienne . He cultivated the relationship with the Salier prince Heinrich III. and Heinrich IV. , who later married his daughter Bertha. In 1045 or 1046 Otto married Adelheid von Susa , a daughter of Ulrich-Manfred's Margrave of Turin from the Arduine family . She was previously married to Hermann von Schwaben , who died in 1038. At the time of the marriage, Adelheid is said to have been around 25 and Otto around 45 years old. The marriage brought him numerous territories in Piedmont and access to the Mediterranean.

After his death in 1060 his wife Adelheid took over the reign. In the investiture controversy she was an ardent advocate of the Ghibellines . After her death in 1091, Savoy lost the areas east of the Alps with the exception of Susa .

Otto and Adelheid had the following children: