View of the Dora Baltea in Ivrea 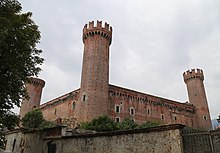 Ivrea ( Piedmontese Ivréa , in the local dialect Ivreja , Walser German Eebri ) is an Italian city with 23,338 inhabitants (as of December 31, 2019) in the metropolitan city of Turin , Piedmont region .

The city is located on the northern edge of the Po plain between Turin and the Aosta Valley at an altitude of 253  m slm. It lies at the foot of a 25 km long ridge of moraine origin, known as La Serra. The Dora Baltea River flows through the city . The municipality covers an area of ​​30 km².

The so-called Ivrea body is named after the city . This is a body that protrudes obliquely from the upper mantle of the earth and has a significantly greater density and causes massive regional deviations from the perpendicular as well as an irregular bending of the southern Alpine geoid .

In the valley of the Sesia River , a tributary of the Po , one can find a sequence of layers that precisely reproduces the structure of the earth's crust up to the upper mantle. It is believed that this body was tilted when the Alps were formed.

Ivrea was born in 100 BC. Founded by the Romans as Eporedia .

In the 6./7. In the 19th century, after separating from the Diocese of Vercelli , Ivrea became the bishopric . It was the center of a Lombard duchy and the Margraviate of Ivrea in post-Carolingian times. After the Anskarian family, who dominated the city in the 10th century, Arduin took power from Ivrea around 990 and waged several wars against his neighbors, especially against Bishop Leo von Vercelli , who in turn was supported by the Ottonian imperial family.

After Arduin's death, the margraviate disintegrated and the bishops of Ivrea, together with the communal institutions, became the determining force: in the 12th century, there was action against Friedrich Barbarossa . The boom at the beginning of the 12th century was followed by the incorporation into the Margraviate of Montferrat and with it the decline of communal structures in the second half of the 13th century . In the 14th century, the city came under the influence of the Savoy family and was in 1356 by Amadeus VI. Affiliated to Savoy. 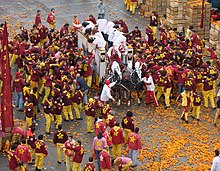 Ivrea is known for its historical carnival , where traditionally an "orange battle" ( battaglia delle arance ) is held. The origin of this tradition goes back to the year 1808, in which the Napoleonic rulers at the time decided to merge the various carnival festivals into one.

The Olivetti company was founded in Ivrea in 1908 . The city's economic and social structure is closely linked to the corporate history of Olivetti, which has long been the city's largest and most important employer. Since the severe crisis of the company in the early 1990s, however, several medium-sized companies have also developed into important employers. On July 1, 2018, UNESCO declared the industrial city of Ivrea a World Heritage Site .