Sestriere ( Piedmontese ël Sestrier , French Sestrières , Occitan Sestrieras or la Sestriera ) is a municipality with 922 inhabitants (as of December 31, 2019) in the Italian region of Piedmont . Located near the French border in the metropolitan city of Turin, it is a winter sports resort .

The place is located on a pass of the same name, 2035 meters high, between the Val Chisone and the Susa Valley (Val di Susa). In the northwest it is dominated by the 2701 meter high Monte Fraitève, in the southeast by Monte Sises (2658 m) and the Punta Rognosa ( 3280  m ). The districts of Sestriere Colle on the pass, Sestriere Borgata in Val Chisone, Champlas du Col and Champlas Janvier in the Susa Valley belong to Sestriere . 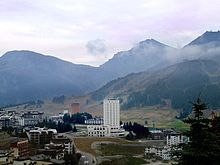 View of Sestriere from Monte Motta

Fiat founder Giovanni Agnelli senior was the beginning of the 1930s, two hotels and two cable cars to build, including one by Adolf Bleichert & Co. created aerial tramway . Another hotel, a ski jump and the first chairlifts as well as Europe's highest 18-hole golf course followed. The facilities were damaged in the Second World War and then rebuilt in the 1950s.

Together with the neighboring communities of Claviere , Sauze d'Oulx , Cesana Torinese and Pragelato , Sestriere has merged to form the Via Lattea ski area . The most famous slopes, which are also used for competitions, are Banchetta , Fraitève and Sises . Sestriere has a total of 146 slopes and 92 lifts / cable cars. The total length of the ski runs is 400 kilometers, 120 of which are artificially snowed.

The place is regularly the venue for alpine ski world cup races ; the 1997 Alpine World Ski Championships also took place here. At the 2006 Winter Olympics in Turin , the alpine skiing competitions were held in Sestriere. Sestriere is also home to one of the three Olympic villages for these Winter Games. It covers 75,000 square meters and is centrally located in the town.

Sestriere has been part of the Tour de France again and again in recent years . In addition to four stage arrivals and three crossings of the top of the pass, three stages also started in the place.

From the west, the ascent begins in Cesana Torinese and overcomes 11.5 kilometers of 679 meters in altitude , which corresponds to an average gradient of six percent. The start of the climb in the east is Perosa Argentina . From there it is 37.9 kilometers long and on average 3.8 percent steep, with 1425 meters of altitude being overcome.

In 2011 the 20th stage of the Giro d'Italia led from Verbania to Sestriere. The winner of this stage was Vasil Kiryenka .

In 2013 the 14th stage of the Giros should lead via Sestriere to Bardonecchia ( Jafferau ). Due to snowfall in Sestriere, the place had to be bypassed. Mauro Santambrogio won the stage, which was extended by 12 kilometers .

The 20th stage of the Giro d'Italia 2015 led over the Colle delle Finestre to Sestriere. Fabio Aru won this.

From 1950 to 1960 Sestriere was the starting point for the 1800 km long Sestriere Rally via Bologna and Rome. In 1960 the event was canceled by an official order.