Edge of the old town of Pinerolo

Pinerolo ( Piedmontese Pinareul , Occitan Pineiròl , French Pignerol ) is a city with 36,178 inhabitants (as of December 31, 2019) in the Italian metropolitan city of Turin (TO), Piedmont region .

The community consists of the districts Baudenasca, Gerbido, Riva and Roletto. The neighboring municipalities are Cumiana , Piscina , Frossasco , San Pietro Val Lemina , Roletto , Scalenghe , Porte , Buriasco , San Secondo di Pinerolo , Osasco , Macello and Garzigliana . The patron saint of the city is San Donato . Pinerolo is the seat of the Roman Catholic diocese of the same name .

Pinerolo was mentioned for the first time in 981 as a pinarolium (German pine forest) in a document from Emperor Otto II , in which he assures the bishop of Turin the possession, rights and privileges of the city, which his predecessors already enjoyed. At that time, Pinerolo was not an actual city, but a collection of the hamlets of San Verano , San Pietro Val Lemina , San Maurizio (the upper district of Pinerolos) and San Donato (the lower district), among which San Verano was the most important, as it at the entrance of the Chisonetal . 1064 the city was by the will of Countess Adelaide of Susa the Benedictine monks of the Abbey of San Verano, today Abbadia Alpina via suitable. Against the territorial claims of the Bishop of Turin, who was supported by a document by Friedrich Barbarossa , the population rose up and fought for the Benedictines and thereby achieved communal independence.

In 1220 Thomas I of Savoy occupied the city. The time is marked by uprisings, unrest and strong disputes with the Abbey of San Verano, which finally renounced its rights in 1243 in favor of Amadeus IV of Savoy and his brother Thomas II of Savoy. Under Thomas and his successors in the Acaia branch, Pinerolo experienced a time of peace and prosperity. In 1295 it became the capital of its Piedmontese possessions and remained this until the Savoy-Acaia branch was extinguished in 1418, when Amadeus VIII of Savoy united all of the Savoyard possessions in Italy and France in one fell swoop .

After a short period of French rule from 1536 to 1574, Pinerolo received city rights from Duke Emanuele Filiberto of Savoy . It came under French rule again through the Treaty of Cherasco (1631). By Cardinal Richelieu Pinerolo has been converted into an unusual attachment to allow the French control of northern Italy could be guaranteed by them. At the expense of the citizens, the city walls were repaired, the castle was rebuilt and the citadel was expanded through compulsory expropriations and levies. Only two fortified gates remained in the city, one towards France and one towards Turin. Numerous workshops were dismantled and the artisans were relocated to Lyon, whose economy received an upswing at the expense of the Pinerolese.

The fortress of Pinerolo, the Donjon , was also used as a prison. There was Louis XIV. Put his enemies. Among them was Nicolas Fouquet , former head of finance , who spent the last 15 years of his life here. Another inmate was the mysterious person known as " The Man in the Iron Mask ".

Pinerolo was recaptured by Viktor Amadeus II in 1696, but the French blew up the citadel and fortresses before they left. Charles Emanuel III. received from Pope Benedict XIV the elevation of Pinerolo to the bishopric . Trade experienced a boom, the population grew from five thousand to seven thousand, and the religious orders flourished again.

In 1801 Piedmont was incorporated into France and Pinerolo came under French rule for the last time. With the fall of Napoleon and his empire in 1814, Piedmont fell back to Victor Emanuel I , King of Sardinia-Piedmont . 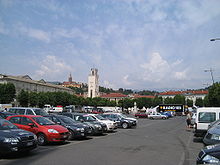 In 1821 the liberation movement began in Pinerolo, led by Santorre di Santarosa and Guglielmo Moffa di Lisio , who are considered to be the pioneers of the Risorgimento .

A period of economic and structural growth began: bridges, roads and railways (the Turin-Pinerolo line opened in 1854) facilitated trade with the rest of the region and with Liguria . During the period of industrialization, more and more people poured into the city from the mountain valleys : the population rose from 12,000 in 1819 to 18,000 in 1890.

As early as 1848, the first “ società di mutuo soccorso d'Italia ” (an organization similar to the German workers ' welfare in Italy) and the “ Società generale degli operai ” (a kind of workers' association) were founded in Pinerolo . In 1849 the military cavalry academy from Venaria was relocated (dissolved in 1945), the building of which now houses the national cavalry museum and the museum of prehistoric art.

During the Second World War, many citizens of the city were active in the Resistancea .

In the post-war period it experienced a final industrialization with the settlement of new plants. In recent times, however, the city has been relying more and more on tourism , also to cope with the increasing structural change (decline of the manufacturing industry). On September 8, 1974, the founders of the Brigate Rosse , Renato Curcio and Alberto Franceschini , were arrested in Pinerolo .

Monument to the persecution of the Waldensians in Pinerolo

In January 2005, a memorial was unveiled in Pinerolo to commemorate the persecution of the Waldenses by the Catholic Inquisition . It is the very first ecumenical monument in Italy and was commissioned by the Waldensian Church and the Roman Catholic Bishop of Pinerolo. The round sculpture designed by the Austrian sculptor Gerald Brandstötter in bronze has the shape of a large flame and is supposed to represent the burning of the Waldensians by the Inquisition. Hope and reconciliation symbolize a girl with raised hands and a view of the sky.

The curling competitions of the 2006 Winter Olympics took place in Pinerolo .

In the past Pinerolo was twinned with Beloit , Wisconsin, USA. This came about because of the paper manufacturer of the same name, Beloit, who had a metal processing plant in Pinerolo. With the closure of the plant (which was intercepted by Italian investors and later reopened as PMT Italia), the subsequent layoff of hundreds of employees and the subsequent bankruptcy in 2000, the relationship dwindled in the late 1990s and the twinning is considered to have lapsed, so it does not is listed once more on the city's homepage.