The Fiat SpA (often referred to as Fiat Group , or Fiat group called) was an Italian industrial company and the largest automobile manufacturer in Italy, with headquarters in Turin . The acronym FIAT stands for Fabbrica Italiana Automobili Torino (German "Italian Automobile Factory Turin").

The industrial division was spun off in 2011 to the sister company Fiat Industrial , which later merged into CNH Industrial .

The automotive division consisted of Fiat Group Automobiles SpA with the brands Fiat, Lancia and Alfa Romeo as well as three subsidiaries: Chrysler Group LLC (with the brands Chrysler, Dodge , Jeep , Ram Trucks and SRT ), Ferrari SpA and Maserati SpA with sales of 25.6 billion euros (including internal double counting), this area contributed around 43 percent to total group sales. The components and production systems division comprised the subsidiaries Fiat Powertrain Technologies , Magneti Marelli , Teksid and Comau. In 2006 - sales at that time of 12.4 billion euros (including internal double counting) and a share of around 21 percent - the second most important division of the Fiat group.

The Fiat Group's other activities accounted for less than three percent, including its publishing subsidiary Itedi.

On April 20, 2010, John Elkann became chairman of the Fiat Group's supervisory board. He is the successor to Luca Cordero di Montezemolo , who headed the office from May 2004 to April 20, 2010. This succeeded Umberto Agnelli , who died on May 24, 2004 and had been chairman since January 2003 following the death of his brother, Giovanni Agnelli .

CEO Sergio Marchionne has been CEO of the group since June 2004 . This followed Giuseppe Morchio , who after Umberto Agnelli's death also claimed the position of chairman of the supervisory board. After Luca Cordero di Montezemolo was given preference for this position, Morchio left the group management. Since February 2005, Sergio Marchionne has also been the CEO of the automotive division. This succeeded Herbert Demel , who had to leave this position after 15 months due to considerable differences of opinion about the restructuring of the auto division. 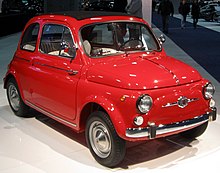 The company was founded on July 11, 1899 by eight founding members, among them Giovanni Agnelli senior , Giovanni Agnelli's grandfather. The first model was the Fiat 3.5 HP , of which around 20 were made from 1899 to 1900. In 1900 the 6 HP was derived from this, from which the 8 HP emerged in 1901 . In 1903 the 12 HP came on the market. In the same year, after exports to France and England, exports to the USA began, and the annual production was 134 copies. In 1905 Fiat took over the Ansaldi works, founded Fiat-Ansaldi, from which the Brevetti-Fiat-Gesellschaft emerged.

From 1960 onwards, Fiat developed into a classic conglomerate that, in addition to passenger cars, built industrial capital goods such as trains , planes and aircraft engines , trucks and agricultural machinery, ship engines and power plants. The importance of services was recognized early on; the company entered the insurance and banking industries. A development of Fiat Ferroviaria that is known to this day is the introduction of tilting technology in rail vehicles, which is still installed in many trains today, including the Pendolino , ICE-T and ICE-TD .

Automobile production was expanded with the acquisition of further manufacturers. First the small Autobianchi brand , then Ferrari in 1966 . In 1969, Italcementi acquired the traditional manufacturer Lancia. Although this company had some innovative products in its portfolio, it suffered from chronic undercapitalization and the low number of units in the luxury segment. By the mid-1970s, Fiat had become the largest automobile company in Europe alongside VW . During this time, serious wrong decisions were made in the development of new vehicle models. Even the 132 could not replace the 125 , even less the 131 Mirafiori the 124 . The Ritmo did not achieve the same level of success as the 128 in competition with the VW Golf. The Uno was then again very successful, but it was later replaced by the successor model, the Punto .

From the 1980s the group got into turmoil. Necessary investments in the passenger car sector were shifted to the commercial vehicle sector. The remaining range of cars on offer fell short of expectations. During this time, on the one hand, the FiatAgri agricultural machinery group was built up CNH Global with the takeover of Ford tractors and Case-Steyr; on the other hand, large investments were made at Iveco . The market share in Europe fell continuously in the 1990s and reached critical values ​​at the beginning of the new millennium. Critics saw the main culprit in Giovanni Agnelli , the 2003 different Fiat CEO. Analysts agree that the grandson of the Fiat founder severely damaged the company through a failed management policy. Umberto Agnelli launched a major restructuring program to save the Fiat group. The Agnelli family in turn supported the aid program with a financial injection of 750 million euros. Just as the comprehensive structuring measures began to take effect - Fiat launched new, promising models such as the minivan "Idea" with higher quality standards - Umberto Agnelli, the last grandson of the company founder, died on May 27, 2004.

Fiat Ferroviaria took over the rail vehicle business of SIG in 1995 . In 2000, the Fiat Group's rail vehicle division was sold to Alstom . On February 14, 2005, Fiat agreed with the American company General Motors to waive its put option in return for a payment of 1.55 billion euros. With this Fiat could have committed GM to take over its auto division, in which the Americans already held ten percent, based on an agreement from the year 2000. In addition, GM sold its remaining ten percent stake. Fiat was completely in Italian hands again.

After the increasingly tight alliance with General Motors was dissolved, several new product-specific industrial partnerships were initiated - with PSA , Ford and Tata Motors , among others .

For the final quarter of 2005, the passenger car subsidiary Fiat Auto was able to post an operating profit for the first time in four and a quarter years. Sales of the new models also developed promisingly. In the first quarter of 2006 , the Grande Punto was the best-selling car in Europe. Fiat also received 7000 advance orders for the Sedici within the first ten days, so Fiat sold two thirds of the planned 10,000 units by the end of 2006 in one fell swoop. 70,000 units were planned for sale for the new Fiat Bravo (type 198) by the end of February 2008, in August 2007, however, over 80,000 were sold. In 2006 Fiat opened its new brand and adventure world Mirafiori Motor Village .

The Fiat 500 should appear on September 15, 2007, this date was brought forward to July 4, 2007, exactly the 50th anniversary of the presentation of the Nuova 500. As in 1957, the first copy was presented to the President. The new Fiat 500 exceeded all expectations in terms of order volume. Experts interpreted this as a “sign of a turnaround” and a “successful restructuring”. Meanwhile a second production line has been opened in Mexico to serve the North American market.

The government of Serbia and representatives of the Italian automobile company Fiat signed a joint venture agreement on September 29, 2008, through which Fiat took over 67 percent of the Zastava plant in Kragujevac. Almost 1 billion euros should be invested in the modernization of Zastava. According to Fiat's plans, the production of the Fiat Punto / Zastava 10 or Punto 188 under the new name should be increased to 15,000 vehicles in 2009. For the period after 2009 there were plans to start production or at least partial production of the new Fiat Topolino (similar to the new Ford Ka , not to be confused with the Fiat 500) in the Zastava plant .

Business areas that were incorporated into Fiat Industrial subsidiaries

On April 21, 2010 Fiat SpA announced that it wanted to split up the group. After the shareholders approved the split at the Annual General Meeting on September 16, 2010, the split was legally completed on January 1, 2011. Large parts of the group were transferred to Fiat Industrial SpA , mainly the areas of trucks , drive technology, agricultural equipment and construction machinery. The business with motor vehicles and components (Fiat Group Automobiles, Maserati, Ferrari, Magneti Marelli, Teksid, Comau and FPT Powertrain Technologies) was bundled in the new Fiat SpA. Alfa Romeo was announced as an independent group (automobile manufacturer). The shares of the dissolved Fiat SpA were exchanged on January 1, 2010 at a ratio of 1: 1 for shares in Fiat Industrial SpA. Fiat and Fiat Industrial were then traded separately on the Milan Stock Exchange. According to CEO Sergio Marchionne, the aim of breaking up Fiat SpA was to give Fiat more freedom.

In 2012 it became known that Fiat and Chrysler were able to increase sales in Europe to a total of 6.9% market share in January. Almost all markets are affected, in Europe the increase was 4.2%.

Brands and subsidiaries in the Fiat group 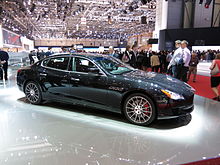 Just like General Motors , Fiat also offers its models under different brands depending on the market. From 2011/2012 Chrysler ( Grand Voyager , 300 , 200 ) will be marketed in Europe as Lancia ( Voyager , Thema , Flavia ), conversely, Lancia models have already been exhibited as Chrysler at trade fairs (e.g. Chrysler Delta). Thus, the Chrysler brand in Europe will probably only be represented in the British Isles.

Such a strategy is under discussion for Fiat Professional and Ram. Similar plans for Dodge and Alfa Romeo have not yet been specifically proven.

In 2009 there were production plants in Europe with the following capacities (with three-shift operation on 280 days / year) and utilization.

There are also several hundred production and sales companies.