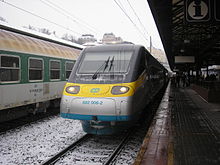 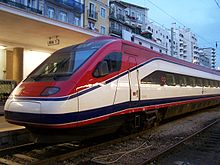 The first Pendolino generation is the ETR 401 , the second generation represents the ETR 450 alone , the third generation is the ETR 460 and the variants derived from it ETR 470 for Switzerland, the three-system version ETR 480 and ETR 485 as well as the versions for the Czech and Finnish railway companies . The counting of the generations is guaranteed by the manufacturer of the trains, the ETR 600 / 610 referred to as the fourth generation.

ETR is the abbreviation of "ElettroTreno Rapido" or "Electric Express Train".

Tilting technology trains that do not come from Fiat are also popularly referred to as "Pendolinos" (see section below ).

The history of the Pendolino trains began in 1969 with the development of the ETR 401, which was used as a pure test train with two power cars and two intermediate cars to test the active tilting technology and, equipped with passenger seats in 1978, remained in service between Rome and Ancona until 1983 .

After these successful attempts, the ETR 450 was ordered in a series in 1984, the first copies of which were delivered in 1985 and started operation on the new Italian line from Rome to Rimini in 1988 and were reproduced until 1992. The ETR 450 is approved for a top speed of 250 km / h and can technically reach up to 280 km / h on the flat.

Its successor, the ETR 460, became an internationally successful model, which was followed by the ETR 470 and the latest variants, the ETR 480 and ETR 485. The ETR 470 was used for transalpine traffic to Milan until 2014, operated by the Italian-Swiss joint venture Cisalpino until 2009 . At times these trains were also used on the Zurich - Stuttgart route. In addition to the Italian electricity system , the energy supply can also take over the one that is common in Switzerland (15 kV at 16.7 Hz). The ETR 480 is ready to be upgraded to 25 kV at 50 Hz and ETCS Level 2 , the power system used on the newer high-speed lines in Italy . The ETR 485 is equipped for this power system from the start.

The ETR 460 was also sold to the Czech Republic as the ČD series 680 , to Slovenia as the SŽ series 310 and to Finland as the Sm3 . The Finnish variant has a wider track width . Ten units of this multiple unit with the wider Iberian gauge were built for the Spanish RENFE in the Spanish plants of Alstom and FIAT Ferroviario as class 490 . They are used as the Alaris train category . For the same gauge, Alstom in Amadora, Portugal, built ten trains for the Portuguese railway company as Alfa Pendular (Series 4000), which will be put into service from 1999.

According to an announcement in April 2016, the Czech Pendolinos will be equipped with ETCS . This replaces ETCS equipment installed when the trains were delivered.

The fourth generation of the Pendolino is the ETR 600 and its variant with three power systems, the CIS ETR 610 .

On May 30, 2011, Alstom announced the purchase of 20 New Pendolino trains by the Polish PKP Intercity . These trains are built without tilting technology. The order is worth EUR 665 million and includes not only the delivery of the trains, but also the construction of a new depot in Warsaw and the maintenance of the trains for 17 years. The first vehicle of the PKP series ED250 was presented on June 17, 2013. The trains have been in scheduled operation since December 14, 2014.

As a result of the 2014 revised technical specifications for interoperability , the Pendolino is also being developed.

The first customer of this revised version with redesigned front sections is the Italian railway company NTV . The first order for 12 seven-car trains with the designation ETR.675 Pendolino EVO was placed in October 2015, followed by an option for five more trains in September 2016. Finally, another five vehicles were ordered in July 2018, making this fleet a total of 22 trains. Their maintenance is carried out by the manufacturer Alstom Ferroviaria for a period of 30 years from delivery 2017 to 2018. In addition to 479 seats, there are also two wheelchair spaces. Scheduled operation of the Pendolino EVO began with the timetable change in December 2017.

A "Pendolino Britannico" was developed for intercity traffic on the West Coast Main Line in Great Britain , the car body of which differs significantly from all others because it had to be adapted to the smaller British clearance profile . These multiple units are run as British Class 390 .

The CRH5 of the Chinese railways is very similar to the ETR 600, but with a wider car body and without tilting technology .

Trains from other manufacturers with Fiat tilting technology

In the vernacular also tilting trains that do not come from Fiat and Alstom, referred to as "Pendolino"

Another widespread system with tilting technology that does not come from Fiat or Alstom is the Spanish Talgo Pendular.