The title of this article is ambiguous. Further meanings are listed under pendulum (disambiguation) .

A pendulum , also known as a gravity pendulum (formerly also perpendicular , from the Latin pendere “to hang”) is a body which, rotatably mounted on an axis or a point outside its center of mass , can swing around its own rest position. Its simplest design is the thread pendulum , which consists of a weight suspended from a thread and structurally resembles a plumb bob. In this sense, the spring pendulum and the torsion pendulum are not pendulums .

One property of the gravity pendulum is that its period of oscillation depends only on the length of the thread (more precisely: the distance between the suspension and the center of gravity of the pendulum body), but not on the type, shape or mass of the pendulum body; also almost not of the size of the maximum deflection, provided this is limited to a few angular degrees . This was first established by Galileo Galilei and used to regulate the first precise clocks after in-depth studies by Christiaan Huygens . A seconds pendulum has a length between 99.1 and 99.6 cm , depending on the geographical latitude of the location.

Movement of the pendulum

The pendulum usually consists of a band or a rod, which is weighted down with a mass at the free end. Such a pendulum from its vertical brings one rest position , it swings under the influence of gravity back and is, as long as no damping occurs symmetrically between the apexes as a reversal point of the movement to the lowest possible position of the center of gravity - continue to oscillate - the rest position. When swinging, the potential energy of the mass is converted into kinetic energy and back again. In the rest position the entire energy of the oscillation is available as kinetic energy, at the apex as potential energy. On average over time, the energy is divided equally into kinetic and potential energy according to the virial theorem .

The regularity of the period of oscillation of a pendulum is used in mechanical pendulum clocks . If their pendulums are to be accurate , they must cover the smallest possible and constant amplitudes .

The rotation of the earth could be demonstrated with the Foucault pendulum : The Coriolis force acts on the pendulum from outside by changing its oscillation level and deflecting it from oscillation to oscillation in a recurring pattern.

With this constant of proportionality, the harmonic oscillator has a degree of freedom called its angular frequency . The solution to this equation is of a periodic nature, which, depending on the initial physical conditions , can be written as the sum of a sine and cosine function :

Oscillation of a thread pendulum

The mathematical pendulum is the simplest model of a pendulum: A mass point is suspended from a massless, rigid thread and can accordingly only move in two dimensions on a circular path around the suspension. Its only degree of freedom is the deflection around a position of equilibrium or rest position and the weight acts as a restoring force on the mass point. If the deflection is sufficiently small, the mathematical pendulum can be described as a harmonic oscillator. The angular frequency depends only on the length of the thread and the acceleration due to gravity :

The generalization of the mathematical pendulum in three dimensions is called the spherical pendulum . Its coupled system of equations no longer has a simple solution.

The calculation also only applies to a small deflection.

With the double pendulum, a second pendulum is attached to the mass of one pendulum. Among other things, it serves to demonstrate chaotic processes, as movement can be chaotic. 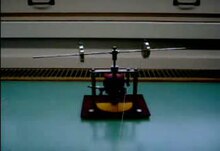 Spring pendulums are not pendulums in the true sense of the word, because, unlike gravity pendulums, they have their own restoring forces that are independent of gravity.

There are u. a. the following variants: