As beat is referred to the effect that the resultant of the additive superposition ( superposition ) of two oscillations , which differ in their frequency only slightly different from each other, a periodically increasing and decreasing amplitude has.

Beatings occur with waves for which the superposition principle applies, for example with sound waves , electromagnetic waves or electrical signal currents. Since the instantaneous values ​​of the output oscillations periodically strengthen or weaken each other depending on the phase position , the resultant has an increasing and decreasing amplitude. The frequency of this change is higher, the greater the difference between the output frequencies and is.

In contrast to the methods used in mixer stages , no new frequencies are generated with beating , and no frequency shifts occur either. 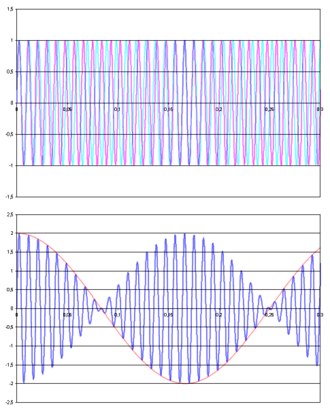 Two harmonic oscillations and with slightly different frequencies and :

For the sake of simplicity it is assumed that both oscillations have the same amplitude.

Then the total oscillation (beat function) can be represented as follows (index for resultant ):

This expression can be transformed by applying the trigonometric addition theorems :

This expression can be simplified with the following definitions:

: Frequency of the superposition oscillation ( mean value of the individual frequencies)

: Frequency of the envelope

The beat frequency results from the course of the amount of the envelope:

is the time between two points of minimum amplitude ( nodes ) of the beat function. The beat period is greater, the closer the two output frequencies and are together.

If the amplitudes and the two frequencies are not the same, then one speaks of an impure beat .

This phenomenon is demonstrated by the following sound example ? / i : A sine tone with a constant frequency of 440 Hertz is superimposed on a second sine tone, the frequency of which increases from 440 Hertz to 490 Hertz.

How the beats of an interval (here a semitone ) are perceived depends very much on the altitude , which becomes clear in the following example:

Example : The (sine) tones e and f from the major to the three- stroke octave are played first individually, then together. The frequency of f is 6.6% higher than that of e in each octave.

In order to make it easier to understand the acoustic beats, there are four examples here, which differ in their waveform :

In all four sound samples, two vibrations were superimposed, which initially have the same starting frequency of 110 Hz. After 4 seconds, the frequency of one oscillation is gradually increased (in 8 seconds by 50  cents ), then it remains the same for 6 seconds, is now reduced by 100 cents more quickly than in the increase, and after another stable phase it increases again at −50 cents the output frequency changed. The following diagram shows the exact course:

In the case of imprecisely voiced intervals, the beats of the overtones can be calculated as follows:

At the intervals, which are usually outside the critical range, a beat can be heard when two clearly present overtones or an overtone and a fundamental frequency are close together.

As you can see from the following wave pictures, a beat is hardly perceptible with pure sine tones (the amplitudes hardly change), but with a high overtone component it is clearly audible:

Beatings at intervals play a major role in the pure , the mid-tone , the well-tempered and the equal temperament . For example, with a pure third one does not hear any, but with the same step a significant beat - felt as friction -. The beats of the mid-tone fifths are so small that they are not perceived as a dissonance.

The phenomenon of beating can be applied in many ways, e.g. B. in music making practice:

In metrology , an electronically measurable beat is generated by superimposing laser light of an only roughly known frequency with a frequency comb , which enables a much more precise determination of the frequency of the laser.

The beating becomes unpleasantly annoying when two instruments with approximately sinusoidal tones (e.g. flutes ) play closely adjacent tones - it is said that the tones “rub”. When two recorder beginners play in unison, extreme imperfections can even result in an extremely penetrating difference tone being audible in the depths.