Comparison of amplitude and frequency modulation

In the early days of broadcasting, amplitude modulation was the most important method for transmitting signals. There were good reasons to choose AM as the modulation type:

It was accepted that with AM an unnecessarily large amount of energy has to be invested in the transmission of the "carrier", while only a maximum of 18% of the transmission power is in the information-carrying sidebands. In the USA, methods have therefore been developed to reduce the carrier power when the useful signal amplitude is small in order to save energy. As the number of transmitters and - due to the increased sensitivity of the heterodyne receivers invented in the meantime - the range increased over the years, it became apparent that some properties of AM were very disadvantageous:

Considered from today's state of the art, AM is obsolete because the quality requirements have increased and with modern components, FM devices can be built much simpler, cheaper and more efficient. For reasons of compatibility, AM will probably not be replaced in the medium wave range.

left: modulation signal as a function of time, right: spectrum of the amplitude-modulated signal

The picture on the right shows the effects of the (low-frequency) modulation signal, the oscillogram of which is shown on the left, on the transmitted frequency spectrum .

By the modulation signal produced symmetrical to the carrier frequency (engl .: Carrier two additional frequencies, the distance indicating the current modulation frequency). Every change is immediately apparent in the position of these accompanying frequencies with respect to the carrier frequency. If the modulation frequency fluctuates between 300 Hz and 4000 Hz, for example, a frequency band with a total width of 8000 Hz is generated. The upper occupied frequency range is called USB ( Upper Side Band ); The lower occupied frequency range is called LSB ( Lower Side Band ).

AM is used for:

In the following, both the actual frequency f and the angular frequency ω are referred to as frequency. This is possible because both are related via a constant factor . Even so, you have to note that both are still two different sizes. When numbers appear, this is expressed using the units: [ f ] = Hz and [ω] = 1 / s.

(the zero phase angle is assumed to be zero)

With the help of the conversion formula

The resulting frequency spectrum can be read from the formula. The modulated signal contains the (constant) carrier signal

In Figure 1, in addition to the modulated signal, you can also see the two so-called envelopes. These are only used for illustration purposes because their course is the same as the modulating useful signal. Figure 2 shows the three spectra (from the left) of the modulating useful signal, the unmodulated carrier and the modulated signal. As can be seen, the amplitudes of the information-carrying sidebands are significantly smaller than those of the carrier (cf. here the amplitude modulation with suppressed carrier , in which in the ideal case the carrier signal is completely suppressed, ie is). 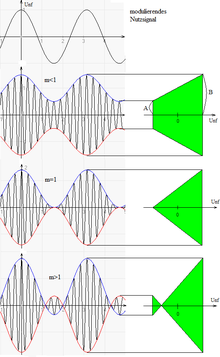 The degree of modulation indicates how strongly the modulating useful signal influences the amplitude of the modulated (carrier) signal.

It must be greater than 0 and less than or equal to 1 in order to be able to demodulate incoherently. At zero, there is no modulation, only the unmodulated carrier is transmitted. With overmodulation takes place, the resulting signal can only be demodulated coherently without distortion. For this reason, the amplitude of the modulating signal is often limited beforehand in order to avoid excessive modulation .

If the phase does not remain constant or there is no pure sinusoidal signal, the modulation trapezoid will be distorted or it may bulge into a cylinder.

In the pointer representation, the modulation components are plotted as pointers and then (as with the parallelogram of forces ) combined to form the resulting pointer. The two pointers of the sideband frequencies U sf1 and U sf2 , which rotate with the modulation frequency in opposite directions , are located on the rigid carrier U t . As can be seen in the figures, the x-components of the pointers of the side frequencies are always opposite and therefore cancel each other out when added. All that remains is the sum of the y components, which is added to or subtracted from the carrier amplitude. The resulting instantaneous amplitude of the modulated signal is always in the same direction (in phase) with the carrier amplitude. This is characteristic of double sideband modulation. In the case of amplitude modulation with a suppressed carrier , U t is missing . In the case of single sideband modulation , either U sf1 or U sf2 is also missing .

The phasor display shows that the amplitude of a high-frequency overall signal (consisting of the carrier frequency and sidebands) changes with the rhythm of the modulation, but the amplitude of the carrier U t remains constant. This can be proven either with a spectrum analyzer or by switching on a very narrow band pass (bandwidth <50 Hz) that does not allow the modulation to pass.

The example was very simple in order to be able to understand the modulation fundamentally. In practice, a low frequency, for example a single tone of constant strength, is modulated onto the carrier. In reality, one modulates significantly more successive frequencies onto the carrier. This amount of frequencies from 0 to is called frequency band or baseband . The areas next to the carrier after modulation are called sidebands . There is an upper (OSB, USB, upper side band) and a lower (USB, LSB, lower side band) sideband; together they form the bandwidth B .

In broadcasting, a standardized frequency band of 4.5 kHz width (from 0 Hz to 4.5 kHz) is transmitted in the AM range for speech and music, which leads to a bandwidth of B  = 9 kHz. The baseband of the television image signal extends to around 5.5 MHz.

The actual useful power is in the sidebands, with the same information in both sidebands, which consequently means that a sideband is completely superfluous, as is the carrier. This results in an efficiency .

Practical implementation of the modulation

The useful signal is usually a frequency mix (e.g. speech) that comes from an LF source such as a microphone. The carrier frequency itself is generated with the aid of an oscillator circuit.

The actual modulation takes place in a mixer , for example in a Gilbert cell , in which the useful signal is multiplied by the carrier oscillation. At the output of the mixer after the bandpass filtering , the amplitude-modulated signal is output, which finally reaches the antenna via an RF amplifier . 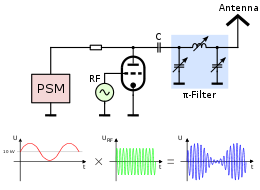 Basic circuit of an amplitude modulator with a triode

For amplitude modulation in larger transmission systems, for example short-wave transmitters with transmission powers above 100 kW, a water-cooled triode is used in the output stage for modulation, as shown in simplified form in the adjacent circuit diagram. The anode voltage of the triode superimposed with the low-frequency useful signal is obtained from a pulse-step modulator (PSM). The unmodulated carrier frequency (RF) is fed to the control grid of the triode. The amplitude-modulated signal can then be decoupled in the anode circuit and fed to the transmitting antenna via an adjustable pi-filter .

The following modulation variants were developed to save transmission power and / or bandwidth:

Digital processes allow low susceptibility to interference or greater use of the spectrum:

At the receiver there is a local carrier that is in phase with the carrier of the received signal. Both are consequently synchronous with each other and therefore coherent. The generation of this local carrier is technically very complex, which is why the method is only used for extremely weak or severely disturbed signals. The mathematical description of the demodulation is quite simple. First, the received signal, consisting of the two side frequencies and the carrier, is multiplied by the local carrier:

With the help of addition theorems

Then the undesired high frequency components are filtered out with a low pass and the DC component with a high pass, so that only the wanted signal with half the amplitude remains:

This simplest form of demodulation does not have to be laborious to generate a local carrier and therefore made it possible to broadcast radio stations a hundred years ago. However, the method can only be used with sufficiently strong signals and generally requires a preceding amplifier. Here, the frequency band sought is filtered out with a band pass, then rectified with a diode and finally smoothed with a low pass . The constant component contained is removed with a high pass if necessary .

Due to the simplicity of this method, the received signal can easily be disturbed by distortion. The envelope detector and the detector receiver are practical implementations of this process .

First, a narrow-band amplification (bandpass) of the desired frequency range ( f T  -  f i max to f T  +  f i max ) is carried out with a slightly damped resonant circuit that can be tuned to the carrier frequency f T. Then, depending on the technology available, the modulation to lower frequencies is carried out in n steps. So a modulator per stage followed by a low pass .

As with the transmitter, the modulator itself is a multiplier. In this example there is only one ( n  = 1) modulator for the sake of simplicity . The carrier frequency in the receiver f Te required for the modulator should correspond as closely as possible to the carrier frequency of the transmitter f T , since otherwise a beat occurs. The readjustment of f Te takes place nowadays via a PLL (phase locked loop).

In the receiver under the condition f T  = f Te :

and     (phase and amplitude omitted)

All frequencies above 10 kHz can now be filtered out with a low pass.

In the real case it is hardly possible to hit the carrier frequency of the transmitter with sufficient accuracy. To get an idea of ​​the required accuracy, here is an example: A beat of 50 Hz corresponds to a frequency deviation of 0.02% based on 230 kHz.

In order to avoid as many problems as possible in analog technology (has to be adjusted, electronic components age) and to minimize space requirements, digital signal processing is increasingly being used. In principle, the received signal is digitized directly into sine and cosine components with a fast analog-digital converter . The rest is done mathematically by the signal processor .

In tests according to the basic standards EN 61000-4-3 or EN 61000-4-6 (immunity to radiated or conducted electromagnetic fields), upward-modulated interference signals are used.