An oscillator circuit is an electronically implemented oscillator (hence also called an oscillator for short ) for generating a sinusoidal alternating voltage .

There are, among others, the following options for setting up such a circuit:

Amplifiers can become an oscillator with appropriate feedback . The vibration conditions, which were initially formulated in the stability criterion by Barkhausen , lead to permanent vibration on a linear feedback amplifier with a certain frequency . They clearly read:

In the theoretical model, a loop gain that even slightly exceeds the value 1 would lead to an infinite increase in the oscillation. So that the oscillator starts to oscillate independently ("by itself"), the value 1 must first be exceeded (see picture). This contradiction leads to studies of the oscillation behavior and the breakdown of the vibrations and is represented by corresponding characteristic curves. One also speaks of a hard or soft vibration insert. The physical background is essentially formed by two phenomena:

Principle of the feedback oscillator

Feedback oscillators consist of an amplifier and a passive, frequency-dependent network. The amplifier output feeds the input of the network. The output of the network is connected to the amplifier input (feedback). You can mentally disconnect the feedback line and instead of the closed circuit you get a transmission chain with input (E) and output (A). For the same conditions as in the closed circuit, the phase position of the output oscillation (φ3) must match the phase position of the input oscillation (φ1) (phase condition).

If the amplifier itself causes a phase shift of 180 ° and the signal propagation time is zero, the network must cause a further phase shift by 180 ° for at least one frequency in order to achieve a total phase shift of 360 ° = 0 °. The frequency-dependent phase shift is shown in a phase response diagram.

A lossy resonant circuit can be undamped by a component with negative differential resistance , for example a tunnel diode or lambda diode , and then generates alternating voltage. The condition is that the total resistance is zero. The energy required for operation is supplied by an external power supply unit or a battery.

In the case of other oscillator topologies, which are based, for example, on the negative characteristic curve such as the relaxation oscillator (see below), the stability criterion has no direct reference. 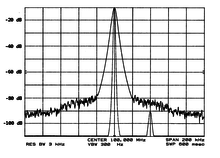 Phase noise of a PLL oscillator in the SW range. In the case of a quartz oscillator, the corresponding characteristic would be an almost vertical line on the left edge of the picture.

The quality of an oscillator is generally assessed according to the stability of amplitude , frequency and phase . If the fluctuations can only be described statistically, they are referred to as noise . Phase noise ( jitter ), which characterizes the sensitivity of a heterodyne receiver in the immediate vicinity of a strong signal, is the only common term used here . Stability against fluctuations in temperature and supply voltage is also important , although there are significant differences: The frequency of relaxation and ring oscillators is very sensitive to changes in the operating voltage. In the case of oscillators with a resonance circuit, this dependency is very low and in the case of crystal oscillators it is negligible.

Another important criterion for measuring devices, for example, is the accuracy with which the desired curve shape is generated. In the case of sine oscillators , this can be described quite simply by the distortion factor . Although primarily used for sinusoidal oscillations, this criterion also applies to other signal forms.

Unmodulated oscillators are used to generate the clock frequency of computers or electrical clocks.

With modulated oscillators, amplitude, frequency or phase are influenced within certain limits by additional components. This allows messages to be transmitted through modulation . This is used to

This also includes the magnetron , although it is also a time-of- flight oscillator .

The main area of ​​application of the sine wave oscillators is radio technology.

It is always ensured that the resonator has a sufficiently high quality factor so that the bandwidth of the signal generated is limited to the close vicinity of the resonance frequency. This reduces the proportion of harmonics in the output signal, even if the amplifying element, for example a transistor, is overdriven and actually generates strong harmonics. In contrast to a Wien-Robinson oscillator  , for example, resonance oscillators deliver a well sinusoidal signal even without amplitude stabilization .

In the case of transit time oscillators, the transit time of pulses in certain circuit parts determines the period of oscillation and thus the frequency. The ring oscillator with its inverter chain is used here as an example . But oscillators such as the reflex klystron and a Gunn diode oscillator also belong to this category, although both have oscillating circuits. In phase shift oscillators, the signal propagation time is generated by RC elements. There is an area of ​​overlap with the relaxation oscillators because the time-determining RC elements there can also be viewed as delay elements. The frequency stability is generally rather mediocre.

A relaxation oscillator is a tilting oscillator . It is not an oscillator in the strict sense, as it normally does not generate a sine wave. The frequency is typically determined by the discharge processes of a capacitor in an RC element. When the capacitor voltage reaches a certain value, the output voltage is switched (it "flips") and the capacitor is recharged. The best-known circuits are multivibrator and tilting oscillator. Square or triangular waves can be picked up at suitable points in the circuit . Since, in addition to an RC element, the threshold voltage of the trigger stage involved also influences the stability, relaxation oscillators are much less stable than resonance oscillators and can therefore not be used in radio technology. This easy ability to be influenced is used in electronic sirens or in digital measurement technology, for example in voltage-frequency converters.

Modern oscillators avoid the disadvantages of the classic oscillator circuits invented about 100 years ago (such as the Meißner circuit , Hartley circuit , Colpitts circuit ), which can generate undesirable parasitic oscillations of a few gigahertz and tend to low-frequency breakover oscillations if the components are not dimensioned well , or have a noticeably different waveform from the sinusoidal shape.

One possible circuit uses a differential amplifier with two transistors and is characterized by its very good-natured behavior (see differential amplifier oscillator ). The pictures below show a variant with NPN transistors with which - depending on the data of the resonant circuit - frequencies in the range 0.05 MHz to 40 MHz can be generated without changing other components. In the other circuit, PNP transistors were used and the values ​​of the components were dimensioned for frequencies in the range from 1 Hz to 500 kHz. In this circuit, the resonant circuit is at zero potential, which is advantageous for some applications (as a rule, the negative pole is the reference point for all measurements).

The spectral purity of the generated oscillation is better if the feedback is so weak that it is just sufficient for reliable oscillation. With differential amplifiers, the amplitude limitation also sets in more gently than with other oscillator circuits. This reduces the harmonic content.