The title of this article is ambiguous. Further meanings are listed under jammers (definition of terms ) .

A jammer makes it difficult or impossible to receive a radio signal (e.g. from radio , television , mobile communications or GPS ) properly . The jamming transmitter, just like the transmitter to be disrupted, sends out electromagnetic waves and completely or partially superimposes the original waves. It can work on the same or a neighboring frequency of the disturbed receiver. The field strength , the modulation of the jammer and the type of the disturbed message are important.

A technical malfunction can generate a jamming transmitter , this must then be repaired or switched off, or the source of the interference must be accepted technically. So-called black transmitters or some legally operated transmitters are also referred to as jammers whose signal interferes with the reception of another transmitter. In particular, in the long , medium and short wave range , such interference often occurs when receiving remote transmitters, since large ranges are possible in these frequency ranges and fewer free channels are available than the transmitters operate. Directional antennas provide a certain remedy , both on the sender and receiver side. Badly shielded or badly suppressed devices can also become jammers.

The problem of machines interfering with radio reception became virulent at the end of the 1920s, when the station density increased dramatically and more and more listeners complained to the Reichsrundfunkanstalten and the postal authorities that they could no longer use anything when the engines were running in the neighborhood Listen to the radio. They went to court arguing that they were getting nothing in return for their license fee. The Braunschweig Regional Court issued its first landmark judgment at the end of 1931 . It condemned the owner of a workshop with malfunctioning engines to refrain from the malfunctions. For a long time the manufacturers defended themselves against this with the argument that the high costs for the interference suppression technology made the operation of the machines unprofitable. 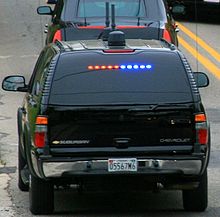 Jammers can be used specifically to make it more difficult for others to use the frequency or an entire band; this is also referred to as jammer or noise jamming . These then send out broadband noise or pulses .

Jammers have long been used in the military environment as part of the so-called electronic countermeasures .

Mobile jammers can, for example, achieve 1 to 2 kW transmission power at 6000 frequencies.

Jammers are also used in the civil sector. For example, German prisons and juvenile detention centers are allowed to operate technical devices that "interfere with or suppress frequencies that are used to establish or maintain unauthorized radio links on the prison premises". The framework conditions of the Federal Network Agency must be observed. If the impairment of use (outside the facility premises) is not significant, no frequency allocation is required ( Section 55 (1) sentence 5 TKG).

In August 2016 it became known that jammers against mobile telephony had been tested in the St. Pölten correctional facility in Austria for several weeks; According to the prison department in the Ministry of Justice with some success, so that only contact between prisoners is prevented and mobile telephony in the open is not disturbed. A second system is to be checked for its suitability. Equipping the 27 prisons in Austria with such cell phone blockers is estimated at several million euros. The communication of the prison guards via radio equipment is not impaired. Every month around 60 to 70 cell phones are discovered in prison inmates in prisons across Austria.

The interference is directed against various signals:

Interference with the radio

In totalitarian states , too, jammers were and are used to prevent the population from receiving radio or television broadcasts from other people . In order to avoid the accusation of suppressing foreign information, strong transmitters of their own programs are often used on the frequencies to be disturbed.

In the GDR , a jammer was used against the left-wing alternative FM transmitter Radio 100 in the 1980s .

The United States interfered with the reception of the satellite on 23 and 24 January 2007 Eutelsat Hotbird 8 because they mistakenly assumed that Islamist transmitter az-Zaura ' would be broadcast via satellite. In addition to numerous radio and television stations, the news agencies Agence France-Presse and the Swiss Dispatch Agency were also affected .

Interference caused by unauthorized transmission of a transmission signal is generally prohibited. In Germany, they are determined by the Federal Network Agency , the successor to the former radio interference suppression service, usually at the request of the person concerned. The polluter is obliged to comply with the legal limit values ​​for a fee or the source of the interference is confiscated. If necessary, additional legal measures similar to the pursuit of black markers can then be taken.