The transmitter is located between Felsberg in the northeast, Altforweiler in the east and Berus in the south close to the dome on the western flank of the unforested Sauberg ( 377.3  m above sea  level ). The border with the French region of Lorraine runs around 750 m to the west. The federal road 269 runs a little north past the transmitter , from which the state road  351 , which passes the transmitter directly to the west, branches off in its section Ittersdorf- Berus to the south-southeast. The counter-approach of the traffic area around the Saarlouis-Düren airfield (EDRJ) is only a few 100 m slightly offset to the north, parallel to the main group of masts in 2000 ft MSL (masts 2100 ft MSL). The distinctive red and white color makes them very easy to recognize and ideal approach points.

Overall view of the transmission system

It was planned as early as the Second World War to build a radio transmitter with a 170 m high tubular steel mast at this location. Because of the advancing war events, this could not be realized.

As antenna a of four versus comes earth insulated, and as self-radiating masts executed directional antenna with a Abstrahlmaximum in the southwest used. Due to the strong directional characteristic of the antenna, the reception northeast of the transmitter, i.e. in most of Germany, is poor or distorted. The masts are 270 m, 276 m, 280 m and 282 m high, masts 1 to 3 were erected in 1954/55, in 1964 mast 4 was added. The centuries-old Karlshof, which played a role in a story by the Saarland poet Johannes Kirschweng, had to give way to the construction of this mast .

In 1958, mast 1 (270 m), the only transmission mast located in Felsberg district, was vertically offset by 102 m in order to achieve better radiation performance. In addition, a reserve antenna has existed since 1975, which consists of two 234 m high braced steel lattice masts insulated from earth (masts 5 and 6). These are located about one kilometer northwest of the broadcasting hall.

On the morning of August 8, 2012 around 10 a.m., an approx. 80 meter high part of the 280 meter high transmission mast broke due to a torn tether rope and hit the ground immediately next to the base of the mast on the transmission site. Nobody got hurt. This made the original system unusable. The damaged transmission mast was brought down on November 19, 2012 with targeted explosive charges, but not disposed of and is still on the transmitter site to this day (as of July 2013). Until the renovation in summer 2013, the reserve antenna with two 234 meter high masts took over the transmission. In aerial photos, no remains of masts are visible (as of May 2015), the bases for the masts and their guy ropes are still in place.

Mast 1 was blown up on June 13, 2013 at around 4 p.m. in the course of a renovation that enabled operation with the two remaining transmission masts of the main antenna, mast 2 and mast 4. Since there was too large a gap between mast 1 and the two other masts due to the omission of mast 3 in summer 2012, it was no longer possible to operate the remaining antenna with mast 1, so the decision was made to use only two masts. In May 2014, the transmission system was handed over to the RTL subsidiary Broadcasting Center Europe, as the Europe-1 owner Lagardère was looking for a solution to ensure the continued operation of the station. For this purpose, BCE replaced the old tube transmitter from 1975 with a new transmitter equipped with transistors. The transmitter is no longer constantly manned by technicians, but is controlled remotely from Luxembourg. 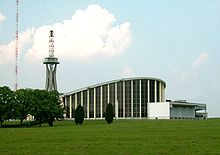 The building in which the transmitters are housed is a prestressed concrete construction without supporting pillars and is a listed building. It is the world's first large-scale building with a roof cast from concrete that hangs on prestressed ropes. Construction began on June 15, 1954 and was completed the following year. It has a length of 86 m, a width of 46 m, a maximum height of 16.22 m, a surface of 2700 m² (1770 m² of which is glass) and a volume of 31,000 m³.

When looking for a suitable transmitter for the Saargau region , they chose the shape of a scallop for the building because of the limestone that occurs here . Therefore the roof has only one axis of symmetry .

The first architect, Jean François Guédy, committed suicide when the roof collapsed during construction and accusations were made against him as a result. Then Eugène Freyssinet took over the construction management in October 1955 ; he had six additional drawstrings installed in the transverse direction for reinforcement . After the partial collapse of the Berlin Congress Hall in 1980, the broadcasting hall was examined for its stability and an extensive maintenance concept was implemented.

The building is heated by the waste heat from the transmitters.

In front of this building there is another telecommunications tower made of reinforced concrete , which was originally intended to broadcast the Telesaar television program .

After the municipality of Überherrn acquired the transmission system in 2016, the term “Gillodrom” for the hall began to establish itself in the vernacular. The name is an allusion to the mayor of Überherrner Bernd Gillo, who pushed through the purchase despite high municipal debt.

The term became part of Maischerzen on Freinacht 2019. In various places in the community signs were put up that indicated the "Gillodrom".

This station is planned to broadcast a DVB-T2 multiplex.

This station is planned to broadcast a DAB + multiplex