A self-radiating transmission mast is a transmission mast in which the entire structure acts as an antenna . It is often used as a transmitting antenna for long or medium wave . The opposite is the antenna carrier , which only serves as a mechanical holder for the (relatively small) transmitting antenna attached to its upper section, for example for VHF radio or mobile radio.

Depending on the requirements, a self-radiating transmission mast can be isolated from ground or grounded. In the first case, the feed usually takes place near the ground. In the latter case, the transmission energy has to be fed into the mast at a certain height, for example via guys .

Insulated self-radiating transmitter masts are under high electrical voltage (up to 300 kV) during transmission and must therefore be secured against unauthorized approach. The line matching between the coaxial cable and the impedance of the antenna base is done by a resonance transformer which is housed in the tuning house.

Since such masts are sometimes very high, flight safety lighting is often necessary. This is fed via a cable that is led through a coil that, with a capacitor connected in parallel, forms a blocking circuit for the transmission frequency. In this way, a transmitting antenna for VHF mounted on the mast can also be fed.

Alternatively, the power supply for the lighting of the mast and the flight safety lighting can also be connected via a so-called Austin transformer . An Austin transformer consists of two circular interlocking coils that are rotated 90 ° to each other and have a large air gap for electrical insulation. The Austin transformer and this type of coupling of low-frequency supply voltage for lighting the high-voltage pylon is named after its inventor Arthur O. Austin.

In the figure opposite, a coupling using an Austin transformer can be seen to the left of the stand insulator. To the right of the insulator there is a spark gap to dissipate electrostatic, atmospheric charges caused by thunderstorms . The outer wall of the voting house behind it is provided with a grounded wire mesh for the purpose of shielding.

The top of the mast is rarely illuminated with the help of sky beamers , as was the case in 1939 for the German transmitter mast in Herzberg (Elster) .

In order to dampen wind-induced vibrations, some self-radiating tubular steel masts use cylindrical vibration dampers that look like cylindrical bulges. Such vibration dampers are used, for example, in the transmitter masts of DHO38 in Ramsloh in Saterland . They are also available on the transmission masts of the shrinkage-reducing transmission antennas of the medium-wave transmitters Hamburg , Wolfsheim and Ismaning, which are equipped with isolators, directly above the isolator.

Electrical insulation of the bracing

Flashover at the isolation of a Pardune at the transmitter Bisamberg

The guy ropes of self-radiating transmission masts must not resonate with the frequency to be radiated . That is why they are usually divided with isolators . During thunderstorms , high electrical voltages can occur due to the electrostatic charge on the ropes of the guy, which can lead to flashovers on the insulators.

Alternatively, the guy ropes can also be detuned using coils or their length can be selected so that no resonance occurs at the transmission frequency used. The latter construction has the advantage that there is no need for insulators and surge arresters that can only be maintained with great effort in the guys . Plastic ropes have also been used to brace self-radiating transmission masts. However, there are aging problems with such ropes, so their use is not widespread.

There are also masts that are electrically divided into several sections by means of several insulators. They can be fed multiple times and enable a flat beam angle (antenna to reduce fading). Such constructions are used in the transmitters in Mühlacker , Ismaning, Hamburg and Wolfsheim (Rhine transmitter ). Solid core insulators made from burnt steatite are used as insulators for the tensioning . Hollow bodies made of steatite serve to isolate the mast construction from the earth. Due to the high hardness and the associated low fracture toughness of this technical ceramic , special requirements are placed on design and assembly.

Since the self-radiating transmitter masts, which are isolated from earth, are under high electrical voltage, maintenance work is a particular challenge. Either the antenna must be switched off completely or a special isolated platform must be used to allow fitters safe access. In the first case, a replacement antenna must be available if transmission is not to be interrupted.

In some self-radiating transmitter masts, an elevator system was also installed, which for reasons of the mast statics is usually designed as a self-propelled climbing elevator . As a rule, it is driven by an electric motor, sometimes also by a combustion engine. The power supply to the elevator car takes place either via power rails ( Ramsloh in Saterland) or via a permanently connected trailing cable . It is led through the coil of a blocking circuit for the transmission frequency, which lies between earth and the transmission mast, together with the lines of the flight safety lighting. 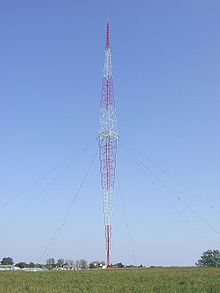 A special type of self-radiating transmission masts is the Blaw-Knox transmission tower , which was built in the USA before the Second World War . This construction is similar in shape to a double pyramid. However, it has poorer radiation properties than conventional guyed transmission masts and has therefore not been used since 1940.

Free-standing towers that are isolated from the ground are another special feature. A very well-known representative is the Berlin radio tower , but it was never used as a self-oscillating transmission tower. Other towers of this type are the antenna towers of Radio Luxemburg in Junglinster and the Blosenberg tower in Beromünster.

On May 18, 1974, the 646 meter high self- radiating transmission mast Radio Warsaw was completed in Konstantynów , Poland . The cable-braced steel tower used as a long-wave transmitter by “Radio Warsaw” was the tallest structure in the world until it collapsed on August 8, 1991.

The maximum voltage applied to the mast is given by