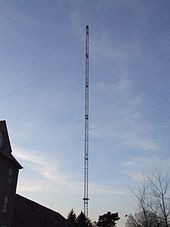 The transmitter museum, which opened in 1993, exhibits over 1500 exhibits from transmitter technology and, as a special showpiece, the Tegel transmitter , which was shipped to Königs Wusterhausen in 1948 and which is still in working order.

From 2005 to 2006 there was a dispute over the use of the building that belonged to Telekom and had previously been given to the museum free of charge. Since Telekom did not want to continue paying the maintenance costs, the museum had to close on July 31, 2005 and should be evacuated . After lengthy negotiations, the city of Königs Wusterhausen decided on October 22, 2006 to take over the site from Telekom for one euro and to turn it into a tourist attraction. The museum reopened in July 2007 and is run as a foundation.

Since then there have been campaigns for children, radio technology exchanges, special exhibitions (for example, an exhibition on the development of television in Germany in 2014) and public events. A sponsorship association called Sender KW supports the city in its efforts to maintain and demonstrate the technology.