Herzberg lies in the lowlands formed by the Black Elster , full of streams and rivers. This landscape continues in particular to the west (towards the Elbe ) and south.

The city of Herzberg is located on the Black Elster about 90 km south of Berlin on the border with Saxony-Anhalt and Saxony . The geographical border triangle is located in the district of Züllsdorf . The B 87 and B 101 meet in Herzberg .

According to the main statute, the urban area includes:

as well as the districts

The place was first referred to as Hirthsbergh , then Hirzberg . This was derived from * Hirschberg , from the deer . This is still the heraldic animal of the city. Later the name became Herzberg .

The oldest mention of the place is from 1239. Archaeological and dendrochronological studies suggest that it was formed around 1215. However, for a long time a document was referred to, according to which the place supposedly already existed in 1184. A review of the information revealed that the document in question does not exist and that Herzberg only played an important role in the region much later.

Count Friedrich II. Von Brehna initially only had the patronage of the area, later he took it as a settled fief in his possession. It was probably Dutch hydraulic engineers who dug ditches and walls around the city in order to expand and fortify the city; it was Lapine, Mühlgraben, north and south promenade.

After the death of Count Otto III. (IV.) Brehna († 1290) transferred King Rudolf on 31 August 1290, the county Brehna with the city of Herzberg as a completed fief to the Wettiner in Wittenberg, the Askanierherzog Rudolf I. The citizenship procured it, the city as a spa town Prince to assume.

In 1361 the city of Herzberg acquired the privilege of running the salt market. The medieval long-distance trade from Leipzig via Torgau led past Herzberg to Frankfurt / Oder . In 1467 the city acquired jurisdiction over neck and hand from the elector. The city had freedom of escort in the entire Electorate of Saxony , but in 1558 leased the “Haupt und Beigeleit” on the Leipzig – Frankfurt / Oder road.

As early as 1522, the Protestant service in German was introduced by Johannes Wagner. In 1538, Philipp Melanchthon wrote school regulations for the grammar school located here, which were adopted throughout Germany in the course of the 16th century.

Herzberg is one of the few German cities that could not be conquered during the Thirty Years' War from 1618 to 1648 due to an extensive river and rift system.

A city fire destroyed large parts of the town in 1757.

With the Congress of Vienna in 1815, Herzberg came to the Kingdom of Prussia in the province of Saxony . In 1816 it became the district town of the newly formed Schweinitz district .

Weimar Republic and the Nazi era

The NSDAP did not run for the election of the Herzberg city parliament in 1929, although there was a local group from 1924 on. Mayor was Walter Sourell of the German National People's Party until 1933. In the election to the Reichstag in 1933, the NSDAP received 57.7 percent of the vote.

Residential house in the settlement Am Sender

Herzberg was the location of the German broadcaster III from 1939 to 1945 . The transmitter spread on long wave 191 kHz, the program of the Germany transmitter . A guyed , self-radiating transmission mast , which was 325 meters high without roof capacity, served as the antenna . At the top it carried a 4 meter high lenticular roof capacity with a diameter of 25 meters, which was accessible from the inside.

Since this mast also stood on an 8 meter high voting house, the entire construction was 337 meters high and at that time was the second tallest structure on earth. It was also noteworthy that this mast had no flight safety lights. Instead, during the night, its top was illuminated by three rotating spotlights mounted on small masts . In an air raid on April 21, 1945, the Deutschlandsender III was badly damaged and thus unusable, although the mast remained undamaged. After the end of the war , the entire technical equipment was dismantled by Red Army troops and civilians who had been called in. Remains of the transmitter are still there today. In addition, the street name "Am Sender" and the housing estate of the employees that has been preserved there is a reminder of the former location of the Deutschlandsender III. It is not known where the mast was rebuilt. Occasionally it is claimed that it was rebuilt in Raszyn , but there is no concrete evidence.

In 1990 it was incorporated into the new federal state of Brandenburg , although historically it would actually have belonged to Saxony-Anhalt . Since the district reform in 1993 , Herzberg has been the district town of the Elbe-Elster district.

Population development of Herzberg from 1875 to 2017

Eule-Prütz was elected in the mayoral election on September 24, 2017 with 63.7 percent of the valid votes for a term of office of eight years. He took office on January 6, 2018.

Blazon : "In silver on a green three-mountain, a striding red stag (with 12 ends)."

Sister cities of Herzberg are:

Every year on the first weekend in May the "Herzberger Tierparkfest" takes place. Every September, hundreds of astronomy enthusiasts with their telescopes meet not far from the city for the " Herzberger Telescope Meeting ". Since 2011, the Botanical Garden has been the venue for the Pfingstrock Open Air on Whitsunday, where well-known national and international artists perform.

In the Berlin-Brandenburg state development plan of March 31, 2009, Herzberg and the surrounding area were defined as a separate medium-sized center . The other two centers in the district are Finsterwalde and Elsterwerda / Bad Liebenwerda, with a division of functions. 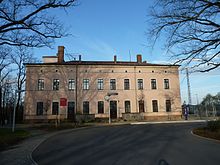 There was also the Herzberg (Elster) Stadt train station on the Falkenberg – Beeskow railway line . Passenger traffic was stopped in 1998. From 2006 to 2008 the Elbe-Spreewald-Kurier and the Elbe-Elster-Express operated by the private railway company DRE Transport GmbH operated here in the summer half-year .

Clajus memorial plaque in the "Magisterstraße"

Cities and municipalities in the Elbe-Elster district