Buckau is a district of the official city of Herzberg (Elster) in the Elbe-Elster district in Brandenburg . The place is on the edge of the Annaburger Heide . 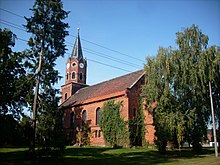 The place was first mentioned in 1346. In 1474 the deserted Mark "Bucka" appeared as an older part of the village, which had a size of 28 hooves . Bukow called in Old Sorbian a place where beeches grew, a settlement in the beech forest. In 1550 there were 25 possessed men , including two feudal men. Without the 20 hooves, the desert field field at that time comprised 30 hooves. It bordered the villages of Fermerswalde , Rahnisdorf, Mahdel , Grochwitz , Graefendorf and the city of Herzberg.

Already at that time the place had its own pastor, the fiefdom of the church belonged to the office of Annaburg. A church dedicated to John the Baptist fell victim to the Thirty Years War , as did much of the rest of the village .

At the request of the chief forestry and game master Johann Günther from Annaburg, Elector Johann Georg II of Saxony handed over to him the village of Buckau, which belongs to the Annaburg office, with all accessories and the administrative works and Rahnisdorf for 1,500 thalers, on August 17, 1680.

A major fire at Locust 1776 destroyed the residential and farm buildings of seven villagers. As a result of the regulations of the Congress of Vienna , the village with around 200 inhabitants became part of the Merseburg administrative district of the Prussian province of Saxony . Buckau was subordinate to the patrimonial court in Rahnisdorf until 1848. In April 1856 another major fire destroyed 89 residential and farm buildings. The village church, rebuilt as a half-timbered building, also fell victim to the fire.

The place is characterized in the present by a rectangular village green and three and four-sided courtyards, which date from the second half of the 19th century and the first half of the 20th century.