The Birth of John the Baptist , Lorenzo Veneziano (around 1356)

The day is also linked to festivals in connection with the summer solstice and customs such as the Midsummer bonfire , as well as a particularly favorable time for collecting herbs and lottery day in connection with peasant rules.

The date of the birth of John the Baptist was calculated according to an indication of the Gospel of Luke (1.26–38 EU ) from the liturgical date of the birth of Jesus, namely three months after the Annunciation and six months before Christmas : In the church year , this resulted in a very appropriate one the (ancient) date of the summer solstice (June 22 ~ 24) and the winter solstice (December 25). Rise to this reference the longest to the shortest day of the year the Baptist was saying in regard to the coming of Christ ". He must increase, but I must be smaller" ( Jn 3,30  EU ) Jesus Christ , his mother Mary and John the Anabaptists are the only ones on whom, in addition to the day of death, the birthday is also celebrated and celebrated as a solemn festival in the Catholic Church.

After Christianization , the church tried to abolish the pagan solstice tradition. Since all attempts failed, the church finally set the feast day for John the Baptist on June 24th in the 5th century and adopted numerous customs.

The Catholic Church celebrates St. John's Day as the solemn feast of the birth of John the Baptist . The date can also be found in the calendar of other churches, e.g. B. in the Protestant service book .

St. John's Day is also celebrated by the Order of Malta or its evangelical counterpart, the Order of St. John , which refers to John the Baptist.

In the cities, people used to go to the cemetery on the eve of St. John's Day to decorate the graves of relatives with summer flowers and rose bushes.

Funeral pyre for a St. John's bonfire in the south of Munich

In many countries a distinctive custom has developed around this feast day .

One of the customs on Midsummer Night was the dance around the bonfire. The St. John's or Würzfeuer is related to the symbolism of fire and sun as well as the solstice. Therefore, the fire itself is also referred to as the sun fire or midsummer fire. It is a custom that has been documented for the first time since the 12th century and has been documented frequently since the 14th century . The fire is usually lit the night before Midsummer Day. Especially on mountains it is an old symbol for the sun and thus for Christ. Even John himself has to do with fire, because according to the prophet Malachi he is considered the forerunner of Jesus ( Mal 3: 1–2  EU ). John said that Christ would be baptized with “fire and with the Spirit” ( Mt 3:11  EU ). The height or mountain symbolism is in the so-called hymn of praise of Zacharias , the father of John ( Lk 1.76–78  EU ).

According to popular belief , the Midsummer bonfire was supposed to ward off demons that cause illness or damage to cattle and malevolent children. This is also indicated by the straw dolls that are thrown into the fire in some areas ("Hanslverbrennen"). In particular, hail damage should also be averted, which is why the St. John's fire is also known as a hail fire . This custom is probably due to the great popularity of the saint. The St. John's fire can be found in various forms almost all over Europe. The southernmost solstice celebration with the Midsummer bonfire was in Alicante for a long time , today it is in Torrevieja .

The rotating wheel used in some places for the Midsummer bonfire is interpreted as the sun. There could also be a connection with the emergency fire, the course of which is largely comparable.

In some places boys and girls jump over the St. John's bonfire. This is a test of courage with a superstitious background: jumping over the fire is supposed to cleanse and protect against disease. The more people jump over it at the same time, the greater the effect should be, and when a couple jumps hand in hand over the fire, the wedding should be celebrated soon.

The Midsummer Jump. From: Otto von Reinsberg-Düringsfeld , The festive year in manners, customs and festivals of the Germanic peoples , Leipzig, 1863 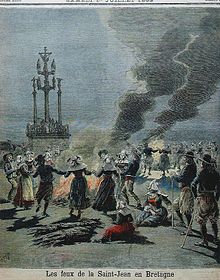 In Germany there are special Midsummer celebrations and customs in the following cities and regions:

St. John's Day is of central importance as a Lost Day in tradition for agriculture and weather. The following pointer plants and animals of phenology are therefore traditionally named after this day:

There are many harvest rules and traditions on St. John's Day. As a rule the sheep's cold draws to a close around June 24th ; therefore the harvest of many crops begins here. However , it ends with rhubarb and asparagus , which is why St. John's Day is also known as “Asparagus New Year's Eve”. The appropriate farmer's wisdom is: Don't forget until Midsummer: Eat asparagus for seven weeks.

Many forage grasses are ripe by St. John's Day, and summer cereals and many other crops are now beginning their ripening period. Johanni is therefore the latest date, even in regions with poor climatic conditions - on the coasts of Northern Germany and in the Alps  - for hay harvest, but also as a guarantee for good weather . The term "Johannischnitt" was coined.

"Before
Midsummer Day one does not want to praise barley and oats."

"When the locust worms shine,
you can straighten your scythes."

A delayed development of the animals around St. John's Day is usually associated with bad weather and therefore with crop failures.

"The cuckoo heralds an expensive time
when he calls out for Midsummer."

Midsummer's Day is usually prescribed as the earliest start of haymaking and the mowing of meadow plants, especially in near-natural meadows. In this way, meadow flowers and grasses can sow undisturbed and birds that breed on the ground can raise their offspring. It is also insects and spiders left enough time for a successful propagating. All of this is an important contribution to species protection and the preservation of biodiversity in Europe.

In the case of deciduous trees such as oak or red beech and evergreen hedges, the second shoot occurs around St. John's Day, which is also known as the “ St. John's shoot ”. As a rule, hedges and trees are pruned for the second time a year ("Midsummer pruning"). They will no longer get out of shape until spring shoots. In fruit trees, the St. John's shoot is torn out because it unnecessarily costs nutrients. To compensate for damage caused by feeding on trees, for example by cockchafers, the St. John's shoot can also be very important or useful.

According to popular and magical ideas, the ferns should, for example, start to bloom on St. John's Eve or St. John's Day.