This article deals with the town of Markdorf in Baden-Württemberg. For a place in Silesia that bore this name from 1936 to 1945, see Markowice (Racibórz) .

Markdorf is a small town in the Lake Constance district in Baden-Württemberg .

Markdorf lies between Friedrichshafen and Salem , at the foot of the 754  m above sea level. NN high Gehrenberg .

Tourists refer to the city as the “pearl of Linzgau ” or “balcony to Lake Constance”. The Gehrenberg region, of which it is the center, is advertised with: “Here, the lake is - by far - the most beautiful” - a slogan that alludes to Lake Constance , which is about six kilometers to the south .

In the 409.2 hectare urban area, there are two nature and landscape protection areas ( Hepbacher-Leimbacher Ried and Markdorfer Eisweiher ), the Gehrenberg forest and a single natural monument (as of May 30, 2009).

The first written mention of the place dates from the year 817, when Emperor Ludwig the Pious made a donation to the monastery of St. Gallen . The city charter was granted around the year 1250; The city therefore celebrated its 750th anniversary in 2000. The expansion of the city was promoted by the Lords of Markdorf from the 12th to the 14th century , before it flourished under the rule of the Constance bishops , mainly thanks to wine growing .

A regular market has been guaranteed in Markdorf since 1236, but the name is not derived from it, nor from its later function as a border town of the Constance or later Baden area. In the first mention of the place, the name is Maracdorf . “Marac” could stand for marach or mare , that is, refer to horse keeping.

St. Nicholas Church after the tower roof was renewed in July 2006

The Thirty Years' War and the Napoleonic Wars , in particular , took their toll. Only a few decades later, on the night of July 10th to 11th, 1842, the great fire of Markdorf followed, leaving 349 residents, especially in the eastern part of the city, homeless. In addition to the upper town, the roof of the steeple of the Catholic parish church of St. Nicholas burned down , so that the nine bells fell into the depths. In the post-war period up to 1964, the custom of ringing the town hall bell on July 11th was still observed to commemorate the Great Fire . In March 1845 the church tower was rebuilt in the shape of an octagon .

Finally, in 1901, Markdorf in Baden was connected to the Imperial German railway network by the Stahringen – Friedrichshafen railway. On December 22, 1939, a passenger train between Markdorf and Kluftern near Lipbach collided head-on and unbraked with a freight train on this single-track line . 101 people died in the rubble .

On April 29, 1945, the city was handed over to French troops who had advanced up to this point .

In the 1960s and 1970s there was strong growth in the city, especially due to the large number of commuters who worked in Friedrichshafen companies. In 1964, the 400-year-old town hall was destroyed by fire and water in a fire. The tower of the St. Nicholas Church was rebuilt in its old style with four gables in 1966, making it 68 m higher than the church tower before the Great Fire, around 8 m higher.

In 1967 the new town hall was inaugurated at the old site. In 1974 the town twinning between the Alsatian town of Ensisheim and the town of Markdorf was established.

In the course of the community reform , the formerly independent communities Riedheim (March 1, 1972) and Ittendorf (April 1, 1972) were incorporated into the town of Markdorf, which led to a sharp increase in population.

The town of Markdorf and the districts of Ittendorf and Riedheim belonged to the district of Überlingen until December 31, 1972 .

After the local elections on May 26, 2019 , the distribution of seats was as follows:

Georg Riedmann has been the mayor since he took office on September 23, 2013 (and his re-election in 2021). The former head of the Donaueschingen Cultural Office was elected in the second ballot on June 30, 2013 with 53.5% of the vote and sworn in on October 16, 2013. He is married and has three children.

His predecessor Bernd Gerber ( FWV ) followed Eugen Baur in 1991, who switched to the private sector after 16 years in office. Gerber was re-elected to office in 1999 and 2007, and resigned prematurely in 2013.

Mayors of the former municipalities of Ittendorf and Riedheim were Josef Lang and Josef Lohr until the municipal reform.

Markdorf has joined forces with the communities of Bermatingen , Deggenhausertal and Oberteuringen to form a community administration association. The seat is in Markdorf.

Blazon : "In gold, an eight-spoke red wheel without rims."

The city was founded in the 13th century by the Lords of Markdorf. The coat of arms of this noble family , which died out around the middle of the 14th century, adorns the seal of the city, which at that time belonged to the Bishop of Constance , which has been documented in impressions since 1414 . Thus the original coat of arms, which shows a mill wheel that deviates from the usual heraldic form , has become the city's coat of arms. While the oldest seal still depicts a twelve-spoke wheel, which can also be viewed as a stylized sun, seven curved blades of a mill wheel can be recognized in a seal from the 16th century. After 1895, the wheel shape from the oldest seal of the Lords of Markdorf (1236) prevailed.

The mill wheel can also be found in a modified form in the coat of arms of the Lake Constance district, which took it over from the Markdorf coat of arms in 1976, three years after the district reform .

Since 1974 there has been a town partnership with the French town of Ensisheim in Alsace .

Markdorf is located on the Upper Swabian Baroque Road and the Upper Swabian Way of St. James from Ulm to Constance. From Mark village there are still 2,364 kilometers to the finish of the Camino de Santiago in Spanish Santiago de Compostela .

The third and fourth stage of the Jubiläumsweg Bodenseekreis , a 111-kilometer hiking trail that was signposted in 1998 to mark the 25th anniversary of the Bodenseekreis, begins at Markdorf train station . In six stages, it leads through the hinterland of Lake Constance from Kressbronn via Neukirch , Meckenbeuren , Markdorf, Heiligenberg and Owingen to Überlingen .

The Wirtshaus am Gehrenberg with the nationally known theater stadel since 1982. Initially pure cabaret , concerts and a cinema were added over the years. (Well-known cabaret artists and comedians such as Michael Mittermeier or Django Asül have already performed.) 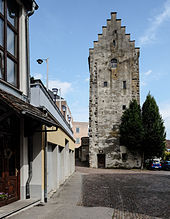 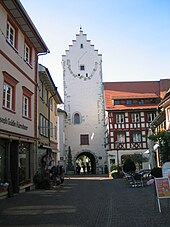 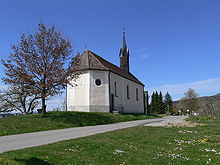 In Markdorf, Lake Constance dialect is spoken. The leaflet “So homme'r gschwätz” is published to explain the expressions.

The business location Markdorf is characterized by agriculture , especially fruit and wine growing , outside the city . Tourism and local recreation are also important economic factors. 4,800 jobs in local companies reflect the economic strength of Markdorf. Today, the city sees itself as an innovation-promoting location for trade , craft , trade and industry and is also the residence of many commuters who work in the surrounding economic centers of Friedrichshafen and Ravensburg . Commercial areas close to the city are “Schießstattäcker”, “Riedwiesen” and “Negelsee”. The largest companies in Markdorf include Weber Automotive GmbH (automotive supplier and manufacturer of engines and components), J. Wagner GmbH and TechniData AG (takeover by their partner SAP in the third quarter of 2010) as well as plants from companies such as Alpla (worldwide for the market leaders in the field of plastic packaging) and Conti Temic .

The family company Arnold Holstein , founded in 1959, produces distillery and distillation systems for well-known spirits producers all over the world. There are a total of 101 small burners in the Markdorf area (as of December 2011).

Markdorf is connected by the Deutsche Bahn AG through the Bodenseegürtelbahn . Coming from Lake Constance, the city can be reached via the B 33 from Meersburg , further to Ravensburg . 25,000 vehicles pass through the city every day. The Markdorf glider airfield is located about 500 meters south of the village .

The Südkurier runs a local editorial office in Markdorf.

In addition to Überlingen, Friedrichshafen and Tettnang, Markdorf is the only town in the Lake Constance district with a full school program including the Werkrealschule. The city has several and varied educational institutions such as the Markdorf Education Center (BZM), which has been in existence since 1967 , which includes secondary and technical secondary schools, a secondary school and a grammar school , as well as elementary schools. The Justus von Liebig School in Überlingen has a branch in Markdorf. The music school Raumschaft Markdorf trains not only local students but also children from Bermatingen, Deggenhausertal, Kluftern and other neighboring communities in the field of music.

Honorary ring bearer of the city of Markdorf 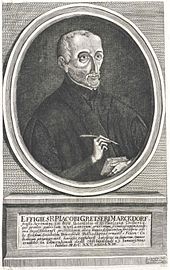 People who have lived on site

Districts of the city of Markdorf