Salem is a municipality in southern Baden-Württemberg in the Lake Constance district . The municipality was awarded the title of state-recognized resort .

The community is located about nine kilometers east of Überlingen and ten kilometers northeast of Meersburg im Linzgau in the hinterland of Lake Constance, mainly in the Salemer Aach valley . The Oberstenweiler district is located on a secondary summit of the Gehrenberg at an altitude of up to 600 m. The district area covers 62.70 km².

For a detailed history of the monastery, see the article Reichsabbey Salem .

The area had been populated at least since the Bronze Age. From the 3rd century onwards, the Alemanni , and later the incoming Franks, founded several villages, including the small settlement Salemanneswilare (later Salmannsweiler).

It is here that the Cistercian Order founded the Salem Monastery in 1137 . It was quickly raised to the rank of imperial abbey and gained even greater independence in 1178 when it was given by Pope Alexander III. was placed directly under the Holy See .

The monastery soon achieved land ownership and extraordinary prosperity through donations, gifts and its own trade, and gained in importance far beyond the region.

The highly Gothic Salem Minster , which has been preserved to this day, was built from around 1285 to 1425 . In 1595 the abbey was given the general vicariate of all Cistercian monasteries in southern Germany. In 1637, through a contract with the Princely House of Fürstenberg , she received county rights and thus full sovereignty over the Salem area.

In the 17th century, the monastery had to cope with severe setbacks. It was only slowly recovering from the Thirty Years' War , which brought death and devastation to entire regions. In 1697 a fire not only destroyed most of the buildings but also numerous art treasures in the abbey.

In the period that followed, the Baroque buildings , which have been preserved to this day, were built under the master builder Franz Beer from Vorarlberg , and the Reichsstift experienced a splendid rise again. Among other things, Abbot Anselm II. Schwab founded an orphanage in 1749, which is considered the first savings bank in Germany. Anselm also had the Birnau pilgrimage church built on the shores of Lake Constance.

The great time of the monastery ended with the Reichsdeputationshauptschluss in 1803. It was secularized , the territory fell to the Margraviate of Baden . From then on, Salem was only of regional political importance.

The mayor, who is directly elected for eight years, is a member of the municipal council as chairman with voting rights. The local elections on May 26, 2019 led to the following result:

Salem has joined forces with the communities of Frickingen and Heiligenberg to form a community administration association.

Town hall in the Neufrach district

Blazon : "Azure, one in two rows of red and silver geschachter inclined beam (Cistercian bars), topped with a growing from the lower margin, left-turned golden Abtsstab with triple silver after gekehrtem below Pannisellus (handkerchief)." 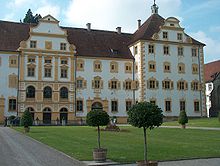 In summer, the open-air pool at Schlosssee attracts bathers from all over the region. There is also a tennis facility and hall, a football and athletics stadium, sports fields, sports halls and rehearsal rooms for clubs. 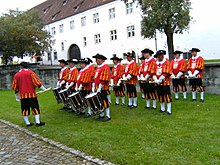 Fanfare procession Salem at the open day on September 14, 2014 in the monastery and palace of Salem.

Salem has numerous clubs, including the Salem fanfare train.

The Schlossseefest Salem, one of the largest open-air events in the Lake Constance region, takes place on the outdoor pool area every first weekend in summer . The highlight is a sound art fireworks display on Saturday evening over the castle lake. International artists perform at large open-air concerts on the castle grounds.

Building of the volunteer fire brigade and the DRK in Mimmenhausen

The economy in Salem is characterized by small businesses and craft businesses. A significant proportion of employees do not work in Salem, but commute to the larger cities in the region. The companies Hermann Schwelling Maschinenbau and Advanced Space Power Equipment GmbH are based in Salem. The Salem business park is trying to create new jobs in the community.

There are 115 small burners in the municipality of Salem (as of December 2011).

Since 1901 Salem has been connected to the railway network by the Stahringen – Friedrichshafen line. There are hourly connections to Markdorf and Friedrichshafen in the east and Überlingen , Radolfzell and Singen in the west. The community belongs to the Bodensee-Oberschwaben Verkehrsverbund ( bodo ). The railway line to Frickingen has been closed and dismantled.

A well-known private school has been established in Salem . The boarding school at Schule Schloss Salem was founded on April 14, 1920 by reform educators Kurt Hahn and Prince Max von Baden and is under the patronage of the respective Baden-Württemberg minister of culture.

The Salem Education Center, which opened in 1976, is located directly on the Schlosssee. There is a community school here .

The suburbs of Mimmenhausen, Neufrach and Beuren each have their own primary school , while Stefansfeld has a public special needs school with an attached advice center for early intervention. The Fritz-Baur-Grundschule is named after Fritz Baur, then mayor of the independent community of Mimmenhausen for community reform in Baden-Württemberg.

The Sonnenbergschule school for the mentally handicapped is located in Buggensegel .

In addition, the community's music school is located in the suburb of Weildorf in the former school building.

Personalities connected to the community