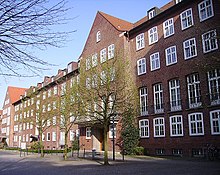 Archbishop's General Vicariate of the Archdiocese of Hamburg

The Ordinariate (from Latin episcopus ordinarius " Diocesan Bishop " ) or General Vicariate is the central administrative authority of a diocese and supports the local Ordinary in administration. The leadership is usually held by a vicar general , who is responsible for the administrative tasks as the bishop's deputy and with alternate authority or authority ( can. 131 CIC ). The Vicar General is often the moderator of the Curia. The size of the curia varies greatly. In St. Clemens in Saratov , it consists of the bishop, the vicar general and two nuns . In Germany they are much larger due to the higher number of believers. The diocesan bishop determines the personnel composition, tasks and working methods. In terms of personnel, the cathedral chapter often has very large overlaps with the ordinariate. But it is more responsible for the administration of the cathedral. Often the members of the cathedral chapter are also department heads of the ordinariate, which makes it very difficult to distinguish between the two bodies.

As a curial authority, the ordinariate is part of the diocesan curia alongside the official (church court) .