Hagnau is a redirect to this article. Further meanings are listed under Hagnau (disambiguation) .

Hagnau am Bodensee is a municipality in the Lake Constance district in Baden-Württemberg . At the beginning of the 19th century it was still called Hangnau .

Hagnau is located on the north shore of Lake Constance between Meersburg and Friedrichshafen on a steep hillside.

Above the village is the Wilhelmshöhe hill (473 m), a popular vantage point.

Already during the late Bronze Age 1050 BC. The lakeside settlement of Hagnau-Burg was inhabited. In 1986 the oldest wooden flute in Europe was found here . In the Überlinger Museum there is a Roman oil lamp that was found in Hagnau.

At the end of the 6th / beginning of the 7th century, Hagnau belonged to the territory of the Alemanni Duke Gunzo . In 1010 the Guelphs donated the area to the Benedictine Abbey of Altdorf . Hagnau was first mentioned on January 24, 1152 in a document by Pope Eugen III. mentioned. In 1436 the Weingartner abbot sold Hagnau to Überlingen. The plague called for in 1514 in almost every home in Hagnau dead. In 1650 Hagnau was sold by Überlingen to the Einsiedeln monastery . Einsiedeln sold Hagnau in 1693 to the Benedictine abbey Weingarten . Then it was secularized in 1803, and Hagnau became Baden.

In 1817 there was a great famine in Hagnau. The flooding of Lake Constance flooded the cellars and the streets of the lower village of Hagnau at foot high. In 1830 there was a sea ​​frost and the people of Hagnau carried the bust of St. John of Münsterlingen to Hagnau in the ice procession . In 1880 there was another Seegfrörne without an ice procession (it did not appear again until 1963, and the bust of Johannes was brought back to Münsterlingen). In 1882 the level of Lake Constance sank so much that the rock "Die Burg" lay dry. In the autumn of 1891 the floods of Lake Constance flooded the lower village again.

A war memorial with the names of the fallen and missing on the south side of the parish church commemorates the time of the First and Second World War.

On January 1, 1973 the district of Überlingen was dissolved, whereby Hagnau came to the newly formed Lake Constance district.

Hagnau has merged with the city of Meersburg and the municipalities of Daisendorf , Stetten and Uhldingen-Mühlhofen to form a municipal administration association.

In October 2015, the lawyer Volker Frede was elected to succeed Simon Blümcke in the first ballot. Frede took office on December 15, 2015.

Blazon : In a split shield in front a golden crook in blue, behind in silver a blue grape with two green leaves.

The crosier is a reference to the long spiritual rule over the place. The branch with the blue grape represents the viniculture in Hagnau, which is still intensively practiced today. The coat of arms was awarded to the community by the Baden-Württemberg Minister of the Interior on July 2, 1963. 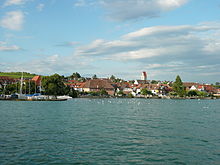 View of Hagnau from Lake Constance

Hagnau am Bodensee at the ship landing stage: historical connection with the partner community Altnau in Switzerland through the sea frosts and ice processions.

Hagnau maintains partnership relationships with the three Swiss municipalities across from the southern shore of Lake Constance :

Hagnau's history is inextricably linked with viticulture. The place is known for its extensive wine-growing areas. The winegrowers' cooperative , the Winzerverein Hagnau eG, is the oldest in Baden and the largest on Lake Constance, both in terms of members (97 winegrowers from 50 wine-growing families) and hectares of vineyards (150 hectares of cultivation area). In the meantime, many winegrowers have created a second mainstay with tourism. The winegrowers' association was founded in 1881 by the folk writer and pastor of the community, Heinrich Hansjakob , in times of economic hardship. Viticulture is operated in a "controlled, environmentally friendly" manner and with reduced yield.

Lake Constance fruit (apples and plums) is grown in the higher hinterland. There are 40 small burners in the municipality of Hagnau (as of December 2011).

Fresh or smoked Lake Constance fish , such as whitefish , can be bought at several points along Seestraße and further down the road . The restaurants offer freshly caught whitefish from Lake Constance. There are a total of five fishermen in the village with the typical open, shallow fishing boats. 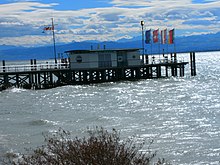 The village is on federal highway 31 , about 13 kilometers west of Friedrichshafen. It can be reached every half hour during the day by train bus on the Friedrichshafen – Immenstaad – Hagnau – Meersburg– Überlingen route in the Bodensee-Oberschwaben transport association ( bodo ). The nearest train stations for long-distance traffic are in Friedrichshafen and Konstanz, the nearest airport in Friedrichshafen. Hagnau can also be reached several times a day by ship ( Konstanz - Bregenz line of the Bodensee-Schiffsbetriebe ). The Lake Constance circular route and the Lake Constance cycle route lead through Hagnau.

Replica of the Lourdes grotto in the churchyard of the parish church of St. Johann Baptist 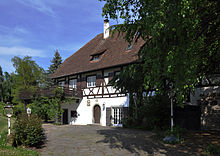 The parish church of St. Johann Baptist includes the most important styles of the last eight centuries: the tower is Romanesque, the choir Gothic, the nave Baroque - and the original painting of the ceiling and the choir arch is from 1980. In the churchyard is a chapel with a statue of the St. Wendelin and one with a replica of the Lourdes grotto.

There are still six former monastery courtyards from the time of the monastery .

Partial view of the snowball column in the center of the village: Hansjakob and his sacristan.

This metal sculpture on a stone base is in the center of the village. It is composed of small figures and was created by the sculptor Gerold Jäggle . It depicts scenes that Hansjakob captured in his book Snow Balls from Lake Constance via Hagnau. The top of the sculpture is dedicated to Hansjakob and his sacristan. In the levels below, residents, traditional costumes, buildings and squares, fishermen and the ice procession at the Seegfrörne are shown.

The riverside park is bordered by the streets Im Hof, Strandweg and the shore of Lake Constance. The part of the park below the town hall is laid out with southern flora. In the Uferpark are the Alte Torkel, the three trees for the unity of Germany, another monument for Hansjakob and the Osthafen.

In the Hagnau Museum in the town hall of Hagnau there are stone tools and Bronze Age collections from the pile dwellings in Hagnau, a documentation on the Seegfrörne from 1573 to 1963, a compilation of the life and work of Heinrich Hansjakob, ink pictures by the painter Julius Heinrich Bissier and paintings by the Hagnau painter Reinhard Sebastian Zimmermann . The museum is funded by the German literature archive in Marbach.

The oldest wooden flute in Europe from Hagnau-Burg (1050 BC) is exhibited in the Pfahlbaumuseum Unteruhldingen .

With the small museum , Hagnau has another museum. The private collection includes dolls, dollhouses, kitchens, shops and other toys from 1830 to 1920.

The spring festival is celebrated at the beginning of May. The Fountain Festival is celebrated on Ascension Day. It commemorates the inauguration of the owl fountain by the Eule jester association at the end of the 20th century. At the end of May, the Häfelefest will follow right on the lake. The Wimmler, Summer and Hagnau Wine Festivals follow in June, July and August. The festival ends with the harvest festival and parish festival and the Suser festival in October.

There is also the regular weekly program of events for tourists during the summer season (wine tastings, walks, slide shows, astronomical tours, spa concerts and the Sunday concert). 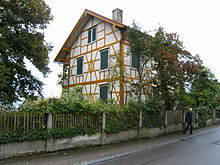 A prominent resident of Hagnau was the teller and civil rights activist Heinrich Hansjakob (1837-1916), who was parish priest here from 1869 and on October 20, 1881 founded the Hagnau winegrowers' association. A memorial plaque on the former house, the life-size monument to Hansjakob with the typical Hecker hat on the north side and a memorial stone on the south side of the town hall remind of his achievements.

The artist Julius Bissier moved with his wife Lisbeth Bissier from Freiburg im Breisgau to Hagnau in 1939 . There he developed his unique visual and formal language. In 1961 he moved to Ascona , Switzerland, where he died in 1965.

All of the personalities named here will be honored and presented in the newly designed (2010) Hagnauer Museum.