A distillery is used to produce high-alcohol spirits from raw materials that are only slightly alcoholic . The concentration of the alcohol takes place according to the principle of distillation , in this context one speaks of burning . 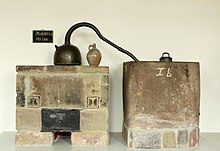 A distillery in the 18th century. Bitburg-Prüm District Museum

Usually, a distillery not only distills, but also carries out all the steps in the production of spirits. These are:

The operation of a distillery is subject to the alcohol tax regulation in Germany.

Spirits are subject to the spirits tax in Germany . The scope of taxation is determined differently depending on the installation, the structure and distribution of the distilling rights have strong historical roots. The 29,000 severance payment distilleries in Germany, which are particularly widespread in south and south-west Germany, are taxed on the basis of the amount of raw materials processed and the amount of alcohol that can be expected from them; the annual amount is limited to 300 liters of pure alcohol. Fabric owners are people who are allowed to burn up to 50 liters of alcohol from self-produced fruit in severance distilleries. 100,000 to 200,000 people use this privilege annually. In the case of closure distilleries , which are not limited in size, the amount of alcohol actually produced is taxed.

Illegally operated distilleries, to be paid in taxes, hot Schwarzbrennerei . Your business is being prosecuted as tax evasion .

Distilleries process a large number of raw materials containing sugar and starch , but the operations mostly specialize in processing one raw material or a group of raw materials into certain products. Among the companies that produce goods for direct use as luxury goods, there are, for example, potato distilleries and fruit distilleries (for fruit brandies ), as well as distilleries for whiskey and absinthe .