Section of an inflorescence

The (common) rhubarb ( Rheum rhabarbarum ), more precisely common rhubarb , also vegetable rhubarb or curled rhubarb , is a plant species from the knotweed family (Polygonaceae). The peeled or unpeeled leaf stalks of this useful plant are processed into compotes , jams , cakes and juice , among other things .

The name Rheum rhabarbarum comes from the medieval Latin word rheu barbarum meaning a foreign root: rheum for root and barbarus for foreign, strange (See. Barbarian ). When it arrived in Europe in the 18th century, the German name was borrowed from the Italian word rabarbaro , corresponding to the French rhubarbe and the Spanish and Portuguese ruibarbo . 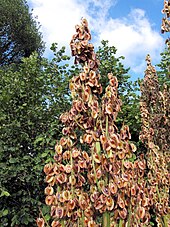 The rhubarb is a deciduous, perennial herbaceous plant and grows up to 2 m high.

After germination, rhubarb forms a primary root that initially develops into a fleshy, thick turnip that is quite short-lived. The primary sprout develops into a tuber in the second year, in the following years the side axes also thicken and secondary tubers develop around the primary tuber, which has since continued to grow. This creates 25-30 thickened shoot axes.

Thick, irregular rhizomes are formed. Parts above ground die off in autumn. The resting phase begins in August and September. They sprout again in spring with underground buds .

The relatively large leaves that stand together in a basal rosette are divided into a petiole and a leaf blade. The thick, fleshy, finely grooved, fibrous and angular, light green to reddish, sometimes whitish petiole is up to 70 cm long and up to 5 cm wide, it has a brownish ochrea . The leaf stalks are flat to slightly trough-shaped on the top and round on the underside. Depending on the variety, the leaf stalk is colored more or less red by anthocyanins . The dark green, heart-shaped and rounded to round-tipped leaf blade is up to 30–50 cm long and up to 30 cm wide and triangular or egg-shaped to broad-shaped, it is partly gathered, and partly unevenly lobed to irregularly crenated or toothed, the entire leaf edge is often often slightly curled. The leaves contain oxalic acid , which is harmful to health, and which, when consumed raw, can cause vomiting and circulatory disorders.

The flowering period extends from May to the end of June. A cold stimulus ( vernalization ), which requires temperatures below 10 ° C for a period of 12–16 weeks, is necessary for flower formation . The panicle inflorescence is up to 40 cm high and contains up to 500 flowers. The small flowers with a light greenish-cream-colored perigone are inconspicuous, mostly hermaphroditic and are cross- pollinated . The fruits are solitary and triangular and three-winged, orange-brown wing nuts ( achenes ). The wing nuts are 7–10 mm long, the width is 6–8 mm, the wings are approximately 3–4 mm wide, the thousand grain mass of the seeds is approximately 11–22 g.

Origin and history of cultivation

Rhubarb comes from the Himalayas . Since the 11th century Rheum rhabarbarum L. has been imported from Central Asia or China via the Arabic medicine of the Middle Ages and the school of Salerno into the Western medicine of the Middle Ages , where not the stems, as they are today, but above all the subterranean shoots - especially the Preparation of medicines - found use. It was grown in Russia in the 16th century and spread to other parts of Europe in the 18th century. He came to England via France and the Netherlands, where cultivation has been documented since 1753. The forcing was first run by gardeners in Chelsea and later perfected in Yorkshire . The first commercial cultivation in Germany took place in Hamburg-Kirchwerder in 1848 and spread from north to south. In 1937 the area under cultivation in Germany was 1,700 ha, in 1993 it was between 350 and 400 ha. Since 1947 rhubarb has been legally regarded as a fruit in the USA.

in a vegetable crate

Medium-heavy, deep and well water-retaining soils with a pH value between 5.6 and 7.2 are best suited for cultivation . The climatic demands of the rhubarb are modest, it just has a very high water requirement. The areas for cultivation must be free of nematodes and root weeds. It is beneficial to cultivate it after plowing a meadow or plowing a meadow.

Rhubarb is grown outdoors with or without a foil covering and indoors as a forcing. The reproduction takes place predominantly vegetatively by dividing the rhizomes . Virus-free plants can be obtained via in vitro propagation using plant tissue culture .

In the open field, the first harvest takes place in the second year after planting. The culture usually lasts five to six years. Here the harvest is only carried out until the end of May, and in the following years until the end of July. The manual harvest for the fresh market often takes place every eight to 14 days, harvest for the processing industry often only twice per season. The young inflorescences are broken off when the leaves are harvested in order to increase the yield. The yields can reach 20–45 t of market goods per hectare. Under suitable conditions, 0–1 ° C and 90–95% relative humidity , free-range rhubarb can be stored for up to three weeks. Rhubarb is sensitive to ethylene and must therefore be stored air-permeable.

Rhubarb is grown in greenhouses or in buildings. The optimal conditions for this are between 12 and 16 ° C and 85–90% relative humidity. For this purpose, the rhizomes are hammered into loose soil. Driving out in the light leads to the preferred red coloration of the stems. In England, rhubarb is traditionally driven under special clay pots.

Varieties differ primarily in terms of the inner and outer stem color, growth length, stem thickness and the time of shoot and harvest.

The leaf stalks are - depending on the variety and age of the stems - peeled and usually cut for further processing. Because of its preparation, rhubarb is commonly regarded as a fruit , although it is actually a vegetable . The best-known preparations are jams and compotes , both on an industrial scale, as well as cakes . In addition, rhubarb is also processed into juice or must . Rhubarb is rarely used as a vegetable. Rhubarb is popular because of its refreshing, piquant-sour taste and low calorie content.

The fruit acids, especially malic and citric acid , in connection with the sugar are important for the taste . Varieties with red pulp contain less fruit acids than those with green pulp. The “Ras Versteeg” variety contains around 1.5 g of malic acid and 0.1 g of citric acid per 100 g of fresh edible substance. The stems contain an average of 460 mg oxalic acid per 100 g fresh substance. This high content has a calcium-consuming effect on humans. Caution is advised for people with kidney and biliary disorders as well as for children.

The laxative effect of rhubarb is likely due to the anthraquinone , which stimulates peristalsis . Medicinally, the roots of Rheum palmatum are mostly used, not those of the vegetable rhubarb.