Retinol , also vitamin A 1 or axerophthol , is a fat-soluble, essential vitamin . Chemically speaking, retinol belongs to the diterpenoids and is a monohydric, primary alcohol . The six- carbon ring it contains is called the β- ionone ring , and the molecule also has a number of conjugated double bonds that are critical to its involvement in the visual process.

Often Retinol is also in many textbooks, simplification, vitamin A equated. But is meant Vitamin A rather a group of substances of β-Jononderivaten that the same biological spectrum of activity as all-trans-retinol have, excluding the pro-vitamins A .

Retinol was discovered in 1913 by Elmer McCollum and Marguerite Davis (1887–1967). They described it as a fat-soluble vitamin and its importance as an antixerophthalmatic factor. It was not until 20 years later that the pure production of retinol from cod liver oil was carried out by Paul Karrer .

The first total synthesis of retinol was achieved in 1947 by the Dutch chemists Jozef Ferdinand Arens (1914–2001) and David Adriaan van Dorp (1915–1995) by gradually reducing tretinoin . This synthesis was named after them the Arens-van Dorp synthesis .

Animals and humans are incapable of the de novo synthesis of vitamin A. Demand is met through food. While carnivores take in vitamin A mainly in the form of retinyl esters or retinol, herbivores use carotenoids as a source. The main natural food sources of retinyl esters and retinol are liver , fish liver oils ( cod liver oil ), egg yolks as well as milk and dairy products , with liver containing by far the largest amounts.

Humans can use retinol and retinyl ester as well as provitamin A to meet their vitamin A needs . Since the provitamin cannot be used equally (absorption, conversion), its need is higher.

According to studies, the consumption of large amounts of retinol or vitamin A, as can already be the case after a liver meal or an overdosed supplementation, is suspected of having a teratogenic effect.

The cat also needs retinol or vitamin A 1 , but occupies a special position because, unlike almost all other animals, they do not convert β-carotene into retinol and can therefore naturally only get sufficient vitamin A by consuming liver.

Retinyl esters are the main form of vitamin A found in food, but cannot be ingested directly from food. First, they have to be hydrolyzed to retinol in the intestinal lumen . After the retinol is absorbed into the enterocytes, it is re-esterified with long-chain fatty acids .

In mammals, around 50 to 80 percent of all vitamin A, consisting of retinyl esters and retinol, is in the liver. The Ito cells in the liver store around 90 to 95 percent of this. Almost all of the vitamin A (98%) in the Ito cells is in the ester form and is packed in fat droplets. Hydrolysis is therefore also a prerequisite for the release of vitamin A from the liver. This takes place under the action of an enzyme (retinyl ester hydrolase).

The vitamin A metabolism is essentially controlled by so-called RBPs ( retinol binding proteins ). Only with their help can vitamin A be used by the body, which means that a deficiency in these proteins can lead to symptoms similar to those of a vitamin A deficiency ( hypovitaminosis ) itself.

If excess retinol cannot be bound by RBPs, symptoms of poisoning occur. They therefore also play a decisive role in hypervitaminosis A. Since they have a so-called zinc finger , the trace element zinc is important for the entire vitamin A balance - both in the case of undersupply and oversupply.

The biosynthesis of vitamin A active compounds is based on a retinyl ester (mostly vitamin A palmitate ): 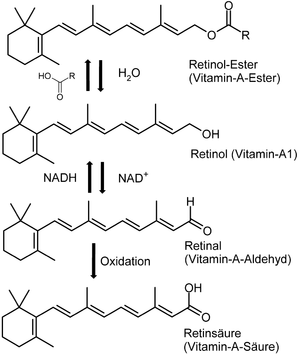 Retinol is the basic component of retinoids . The oxidation of the alcohol leads to retinal , which can be further oxidized to retinoic acid ( tretinoin ).

A key step in the large-scale production of vitamin A is the Wittig reaction . Georg Wittig received the Nobel Prize in Chemistry in 1979 for this widely applicable reaction .

In the first part of the synthesis, a C 15 salt is produced from dehydrolinalool . This reacts through the Wittig reaction with a C 5 acetate, which is produced from dimethoxyacetone , to form retinylacetate . This can be converted into retinol in several further steps.