The Wittig reaction is an organic chemical reaction that serves to create C = C bonds and is named after its discoverer Georg Wittig . It can be used to olefinate carbonyl compounds ( aldehydes or ketones ) with phosphorylides to alkenes by substituting the carbonyl oxygen :

Both inter- and intramolecular variants are known in the Wittig reaction. The reaction is regioselective , that is, the newly formed carbon-carbon double bond is found in the place of the earlier carbon-oxygen double bonds. Aldehydes and ketones come into consideration as carbonyl components, aldehydes being more reactive and sterically less hindered ketones being able to be selectively olefinated compared to sterically hindered ketones. Carboxylic acid esters are almost inert in a Wittig reaction.

The Wittig reaction is used in the synthesis of olefinic natural substances such as vitamins A and D, carotenoids ( β-carotene see below), squalene, unsaturated pheromones , insect hormones, odoriferous substances and prostaglandins .

In his experiments on the quaternization of the main group elements, Wittig obtained a zwitterion which exhibited remarkable properties.

In the presence of carbonyl compounds, they reacted smoothly with the carbonyl carbon to form a carbon-carbon double bond and triphenylphosphine oxide .

Wittig published this novel reaction, discovered in 1947 at the University of Tübingen , under the title About triphenyl-phosphine-methylene as olefin-forming reagents and henceforth called this reaction carbonyl-olefination . The name Wittig reaction later came into use. Today the triphenylalkylphosphonium salt is usually used as Wittig salt for this reaction and triphenylphosphine oxide is obtained as a by-product .

The Wittig reaction quickly proved to be very versatile and universally applicable. Georg Wittig was awarded the Nobel Prize for Chemistry in 1979 .

BASF took note of the new method with enthusiasm. It made it possible to combine an already existing synthetic building block [derivative of (2 E , 4 E ) -3-methyl-5- (2,6,6-trimethylcyclohex-1-en-1-yl) pentane] with the easily accessible (2 E , 4 E , 6 E ) -2,7-dimethylocta-2,4,6-trienedial to link to β- carotene . A patent was filed (BASF) just three years after Wittig's publication. 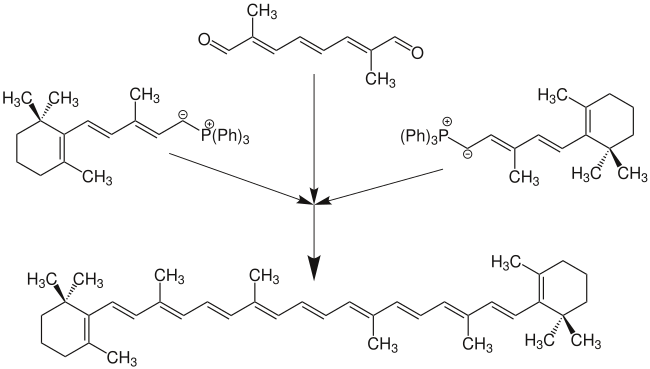 Triphenylphosphine ( 1 ) and ethyl bromide ( 2 ) are heated in benzene in an autoclave to 130 ° C. for 20 hours. The phosphonium salt precipitates in crystalline form on cooling (yield 90%).

Phosphines are good nucleophiles, but bad bases. For this reason, the E2 elimination competing with the S N 2 reaction is almost completely suppressed. Most primary and secondary alkyl halides can thus be converted into their phosphonium salts in good yields.

In contrast to the mostly isolated phosphonium halides, the ylides produced from them by deprotonation at the α-C atom are usually further converted directly.

The ethyltriphenylphosphonium bromide ( 3 ) is deprotonated with sodium hydride under inert gas in DMSO .

An externally neutral phosphorus compound is formed, which is called ylide ( 4 ) or phosphorane. These betaines can also be formulated as Ylene . Other common deprotonation reagents are phenyllithium or n - butyllithium .

A modern and simple method for deprotonating the phosphonium ion under lithium-free conditions is the use of potassium tert -butanolate in THF or, in the case of sterically hindered carbonyl groups, in toluene . The Wittig salt can be mixed dry with the base in equimolar proportions and mixed with the solvent, which is an alternative to the instant ylide that is easier to use . Phosphorus ylides can also be obtained by carbene addition to phosphines.

Mechanisms of the Wittig reaction

The mechanism of the Wittig reaction can be viewed in general or from a stereochemical point of view.

The following mechanism explains the general Wittig reaction, in which phosphorylides react with carbonyl compounds to form alkenes. 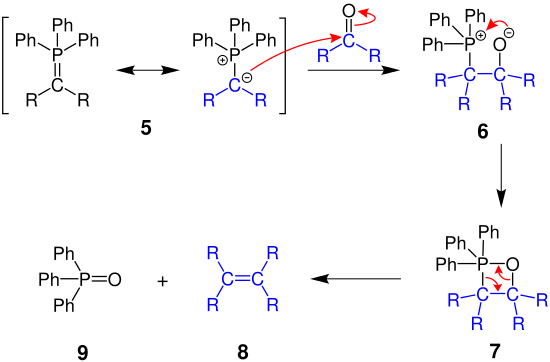 The negatively charged carbon atom of the phosphorylid 5 attacks the carbonyl compound of the starting material and a phosphorus betaine 6 is formed , which further reacts to form oxaphosphetane 7 , a four-membered ring. This finally breaks down into alkene 8 and triphenylphosphine oxide 9 due to the strong phosphorus-oxygen double bond.

Overall, the mechanism has not yet been precisely clarified, or it proceeds differently depending on the substituent. For the most part, the reaction takes place in several stages; individual interconnections can be isolated. In the case of reactive ylidene / carbonyl compounds, the attack of the carbanion and formation of the oxaphosphetane occurs in concert according to the Woodward-Hoffmann rules . There is also evidence that in the presence of very large substituents (high steric hindrance), the reaction by free-radical levels (SET s ingle e Lectron t ransfer) extends.

When the betaine is formed, it is determined whether the alkene is ( E ) or ( Z ) configured. However, the first step is partially reversible.

Possibilities of varying the reactivity of the oxaphosphetane

Destabilization can take place by replacing the substituents on phosphorus with π / σ donors. The ( Z ) -olefins are then usually formed in high yields .

Stabilization can be achieved by replacing the substituents on the phosphorus with π / σ acceptors. The ( E ) -olefins are then usually formed in high yields .

The reaction is initiated by the attack of the carbanion on the positively polarized carbonyl carbon atom and the formation of the betaine. The carbonyl compound is in most cases prochiral; H. When betaine is formed, a new chiral center is formed, which is (pro- R or pro- S ) ( R ) or ( S ) -configured depending on the attack side .

The carbanion of Ylides is also prochiral. So there is an intermediate formation of a compound that contains two adjacent chiral carbon atoms. Depending on how the substituents are arranged, there are two different forms that can be traced back to the carbohydrates threose and erythrose . For naming purposes, the substituents are sorted according to size. If a conformation results (through rotation around the CC axis) in which the large, medium and small substituents are opposite each other, one speaks of the erythro form, alternatively of the threo form. The passage through the betaine intermediate could be proven by isolating stable representatives.

The betaine reacts via the conformer, which enables a thermal [2 + 2] cycloaddition to form the cyclic oxaphosphetane. The existence of the four-ring intermediate could be demonstrated by 31 P-NMR spectroscopy. The oxaphosphetane formed at −80 ° C is stable at these temperatures. It decomposes when heated to 0 ° C.

A retro - [2 + 2] cycloaddition results in the formation of triphenylphosphine oxide and the ( E ) -alkene.

In the case of unstabilized ylides, the reaction is rapid. Due to Coulomb attraction, the reactants approach each other orthogonally (the positively polarized atoms attach to each negatively charged one). At the same time, the “large” methyl groups are positioned as far away from each other as possible for steric reasons. The bond is formed by torsion of the transition complex and concerted [2 s +2 a ] cycloaddition (disrotatory ring closure). The betaine intermediate stage is practically skipped.

The Z -oxaphosphetane is finally formed via a “twisted” four-ring .

Unstabilized ylides are unstable to oxygen and water. Hydrolysis turns an ylide into a phosphine oxide and a hydrocarbon.

These side reactions are usually undesirable and reduce the yield, which is why one works under inert gas and with exclusion of moisture. However, some of these reactions are also used preparatively.

By using chiral phosphorus ligands, Trost and Curran achieved an enantiomeric excess ( ee ) of 30–40% in an intramolecular Wittig reaction . Look there.

With other carbonyl and heterocarbonyl compounds

Phosphorus ylides also react in a similar way with other carbonyl compounds than aldehydes or ketones, for example with ketenes , with isocyanates , with various anhydrides and imines .

R = organyl group or hydrogen . The blue double bonds in the molecules are the newly made CC double bonds.

Like this, the homologue of phosphorus forms quaternary arsonium salts, which can also be deprotonated with bases in the α position. These arsenic ylides behave like nitrogen ylides in carbonyl olefination.

The versatility of the Wittig reaction is shown in the following figure using a few examples: 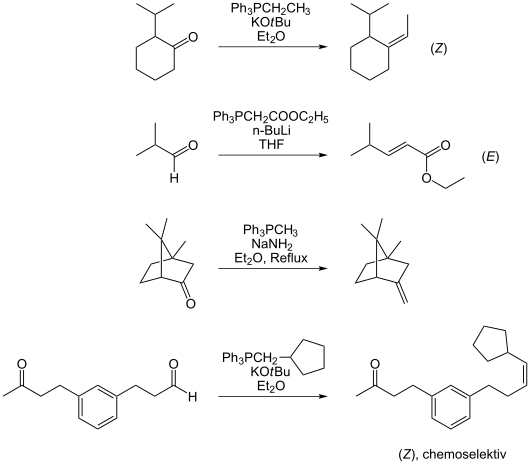 Limits of the Wittig reaction

A disadvantage of the Wittig reaction is its restriction to aldehydes and ketones (see above for exceptions). Carboxylic acid derivatives are more or less inert to ylides. The Wittig reaction also requires basic conditions that can initiate side reactions such as eliminations or racemizations. Alternative olefination reagents are, for example, in titanocene compounds (see Tebbe reaction ).

Alternatives to the Wittig reaction

Peterson olefination , the Julia olefination, and the Tebbe reaction . Furthermore, the metathesis .