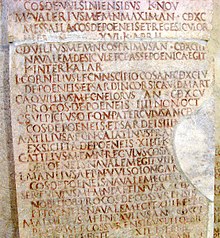 Example of the red coloring of the carved letters. Fragment of an inscription (Fasti triumphales) from 12 BC. Chr.

House inscription with the symbol of a tree of life

Portal inscription on the Georgenkirche in Eisenach

Under inscriptions refers generally characters (mostly font , rare symbols ) that are embedded on a stable support, in the majority of objects with a fixed location. However, there is no precise and undisputed definition of the term. Linguistic representations are primarily memorial , grave, consecration , honorary, sculptor, building release inscriptions , vows , gifts to gods, decrees , inscriptions under private and sacred law.

The definition of the term “inscription” is vague and cannot be formulated completely clearly. The word is a loan translation of the Latin "inscriptio". In antiquity, this referred to the “inscription” on an object or the “heading” of a text; the Latin word has only been understood in its narrower meaning today since the 16th century. The German and the Latin term correspond to the Greek "ἐπιγραφή" ("Epigraphé"), which literally also means "inscription" or "inscription" and from which the term epigraphy for the science of inscriptions is derived.

Since these terms could theoretically designate any form of writing, they are usually defined according to the practical requirements of research: Everything that epigraphy deals with is considered an inscription. This is the definition of the historian and archivist Rudolf M. Kloos in relation to the inscriptions of the Middle Ages and the modern age : “Inscriptions are inscriptions of various materials - in stone, wood, metal, leather, fabric, enamel, glass, mosaic, etc., which are produced by forces and methods that do not belong to the writing school or chancellery. ”Thus, the writing methods learned in schools or used in state administration ( pen , pen, etc.) are excluded and all other written documents are summarized as inscriptions. The French palaeographer Jean Mallon formulated similarly for antiquity : Epigraphy for this epoch deals “with all graphic monuments, with the exception of those written in ink on papyrus and parchment”.

In practice, however, two other groups of materials are excluded from the inscriptions, since they are also researched by their own specialist disciplines: the coins , the subject of numismatics , and the seals , which are concerned with sphragistics . However, even within numismatics, the inscription in the field of a coin is called "inscription".

Other attempts to define and narrow down the term “inscription”, which relate to the specific external form or function of a document, have also been discussed, but have not been successful:

Inscriptions are often carved in stone . It is not uncommon for the letters to be colored or gold-plated. In ancient times , the letters were often traced with red paint. Also metal casting or engravings find inscriptions use. Sgraffito (scratch plaster) is a special technique . In addition, sharp objects are scribbled or scratched in walls or other material, and painted with paint on wood or walls ( graffiti ).

Via the visual perception , certain feelings should be addressed and triggered by the way of representation, such as appreciation , dignity , sublimity , esteem , respect , awe and others. This role is not necessarily realized or supported by a corresponding size, but above all by the targeted use of creative graphic / plastic means. The material used and the technology are an integral part of the aesthetic effect.

The oldest inscriptions known to us come from early antiquity. As historical sources, they are particularly important for research into antiquity and the Middle Ages. They supplement and correct the knowledge about the living environment from this time and help to reconstruct history. Inscriptions are investigated by a separate discipline, as auxiliary historical science applicable epigraphy . The number of ancient inscriptions is in the hundreds of thousands. Since 1853, the Latin inscriptions have been recorded by the Corpus Inscriptionum Latinarum institution from the entire area of ​​the former Roman Empire in a geographical and systematic order. Since its establishment by Theodor Mommsen, it has been the authoritative documentation of the epigraphic legacy of Roman antiquity.

Inscription of the Trajan Column

From the great variety of ancient inscriptions, the monuments of the Roman Empire stand out in their significance for the history of writing . The representatively designed letters of the Capitalis Monumentalis represent a crystallization point in the development of the Latin alphabet . In these ancient masterpieces by the font designers and stonemasons, the aesthetic form of the Latin capital letters has reached its climax. At the same time, the shape of the letters (except for H, J, K, U, W, Y and Z, which were only added later) was finally determined, canonized .

Intensive preoccupation with classical inscriptions began in the Renaissance . Many artists and scientists, including Albrecht Dürer , the mathematician Luca Pacioli and Francesco Torniello , have dealt with the canon of forms of majuscules . With the help of geometric measurements, they tried to make the beauty of this alphabet didactically transparent. The elegance and clarity of this typeface are based primarily on the proportions of the letters, the bold-fine contrast in the lines, its serifs and finally on the rhythm inherent in the overall typeface. The humanists adopted these capital letters in their typefaces, the humanistic minuscule and the humanistic italic . Both formed the models for the first Latin printing types : the Antiqua and the Italic . The artistically mature forms of the classical Roman inscriptions have set aesthetic standards for over 2000 years up to the present day. One of the most famous examples from this period is the inscription on Trajan's Column (114 AD). The capitalis monumentalis, or classical Roman capital, is also a fundamental orientation for contemporary type designers .