The pen (also called a drawing pen ) is a writing and drawing device . The pen is mostly used to apply ink to paper , cardboard , parchment , fabric or other writing materials . The spring is held by a spring holder for better handling .

Springs for various applications and purposes are explained and shown below.

In Europe, since the 4th century AD, bird feathers have replaced the reed ( calamus ) as a writing implement for writing on parchment . For this purpose, the pointed central bar of a feather , usually from geese, was used, the quill . It often had to be cut shorter with a sharp penknife (hence the “small blade” in pocket knives today ). In other cultures, for example for the Hebrew and Arabic script, reed springs remained common. B. were cut from reeds. With the invention of the steel spring, bird feathers and reeds lost their importance. Only glass was occasionally used (see glass nib below ).

The first steel pen ("Aachener Stahlfeder") was invented in 1748 by Aachen mayor Johannes Janssen ; but only a hundred years later did it become more widespread. In 1822 the mass production of steel springs began in England. In the English steel spring production “screw presses were used which resembled those which had been used in button-making for a long time. With these punching machines, steel springs (up to 28,000 per day) could be cut out of the steel strips, which had been rolled as thinly as possible. ”In the 1830s, steel springs appeared in Hamburg and in 1842 the quills were abolished in the first schools there. In the same year, Heintze & Blanckertz was founded as the first German nib factory; with her the industrial production of nibs began in Germany.

A modern further development is the fountain pen , which combines nib and nib with an ink tank (can be filled with a piston mechanism) or an ink cartridge to form a common device, so that there is no need to immerse in a colorant. The construction principle of the nib itself is the same, and with high-quality fountain pens the nibs can also be exchanged; It would usually be possible for other goods, but it is hardly common.

The use of a ribbon spring , also known as a broad spring or alternating spring , enables fonts with direction-dependent changes in the line thickness. The maximum possible line width corresponds to the nib width. There are angled and straight tension nibs that produce different line widths depending on the angle of the nib in relation to the writing direction .

Belt springs were and are typically used in calligraphy .

The pointed nib , also called Schwellzugfeder , is a writing nib which, due to its elasticity, can produce a typeface with increasing and decreasing lines, the so-called Schwellzug, with different writing pressure.

The steel nib spread from England , where it was used to write the so-called English cursive (Anglaise), to Germany. The typeface of the German Kurrent script was shaped by the pointed pen for centuries.

The pointed nib does not have a small ball at the end, as is common today, but runs in a sharp, longitudinally slotted tip. This type of construction requires a special writing technique. When running an upswing, i. H. When pushing the nib upwards, only very little pressure should be exerted on the nib, otherwise the nib would get stuck in the paper. During the downturn, i.e. H. When you pull the nib down, more pressure is exerted on the nib, causing the nib to spread open, releasing more ink . This creates a stronger line on the downswing than on the upswing. It is also important that the pen holder is held at the correct angle when writing with the pointed pen.

The invention of the tension spring , also line tension pen or ball point pen , by Friedrich Soennecken enabled the development of the fonts used today with the same line width. It is the writing tool, the need to learn one of the most commonly used today starting fonts is possible. The nib has a spherical head and is the most widely used nib today due to its use in schools . Together with the Sütterlin script , which was tailored to them, it prevailed over pointed nibs in the 1920s. As a result, the writing is essentially robust against different positions of the pen. Soennecken self-developed circulars, which should make learning easier. This invention made the office equipment manufacturer Soennecken world famous.

The Schnurzugfeder , also plate spring , ornament spring or Redisfeder called, has a staggered by about 30 ° to 45 ° platen with a diameter of 0.5 to 5  mm . Normally this lies flat on the paper when you write, creating an even line. The cord spring is suitable for grotesque or technical writing. In modern calligraphy, the nib is turned up when writing, creating a lively typeface with different font weights.

The split nib is, as its name suggests, split in the middle and thus creates two lines, which is why it is also called a double line pen . Depending on the type, the lines have the same width or they are of different thicknesses. The split nib is used to write decorative fonts and initials. The latter can be decorated from the inside afterwards, as they are only painted as a contour with the split pen.

Note nibs are a special kind of pointed nibs . Its specialty is that it has two spring slots, which gives it a high degree of elasticity ; this means that both thick note heads and slender stems can be drawn with it. Their elasticity makes the typeface look more lively.

The staff pen ( Rastralfeder ) has five small tips that are arranged on a line. You can use it to draw staff as well as paint decorations. Since the tips are all very small, this nib holds little ink.

The elbow pen is a pointed pen, the lower part of which is offset to the left and the tip of which meets the character carrier at a different angle. It was designed to compensate for difficulties in achieving the correct writing angle when writing Anglaise (English cursive).

Poster springs have the same function as band tension springs, only they are much larger. Most poster pens have a built-in ink reservoir because they use a lot of ink when writing.

The rectangular plate nib , also known as Brause 505, is an invention of the German calligrapher Karlgeorg Hoefer . It has a writing surface offset by 90 °, just like the Redis nib, but that of the rectangular nib is angular. Different line widths can be created by placing the entire writing surface or just the edge. The style is similar to that of a brush.

"Graphos" with holder from Pelikan

Draw or tear springs are springs that are used to draw precise lines in various thicknesses, mainly in technical drawings, final drawings and in cartography . They consist of a narrow shaft made of wood or metal (“handle”) and a fixed point with two opposing pointed-oval metal strips (legs, mostly made of chrome-plated steel or brass ). The distance between the legs can be changed continuously using an adjusting screw. One to two drops of ink or Indian ink are poured in between these legs, usually with the help of a fine hairbrush. The distance between the ends of the legs determines the line width, which can be set between approx. 0.05 and 1.0 mm. The ink drops filled in do not flow out of the drawing pen due to their surface tension until the point of the drawing pen is placed on the background of the drawing (usually stiff paper or cardboard). Extension springs are usually guided by hand along rulers or tear bars , and there are also special inserts for use with compasses (instead of lead holders). For hard, abrasive drawing surfaces (certain foils, stone, metal, etc.), pull springs with legs made of hard metal are used . There are also main springs with different fixed preset line widths (for example "Graphos"). These can be opened to clean the ink residues. Drawing nibs have largely been replaced by pen-shaped ink pens and are only rarely used, although they have advantages over them: They allow variable line widths without changing the drawing device, the nibs are easy to clean, and they are tolerant of all types of inks and inks - there is no risk of clogging. 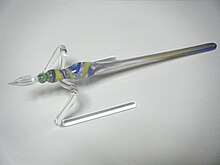 Various manufacturers also have nibs made entirely of glass. The ink flows evenly into the tip through fine grooves. A single immersion is enough to write about half a page. You may also be able to write with types of inks that would clog a fountain pen.

Glass nibs were used in special fountain pens in the 1930s in order to be able to make copies with the help of carbon paper . Normal fountain pen nibs were too elastic for this - glass nibs, however, were so stiff that they could be used to apply the necessary pressure to the paper. Examples of fountain pens with glass nibs are:

However, glass is very prone to breakage, which is why glass springs were usually offered in five-packs as spare parts.