This article deals with cardboard as a material, for further meanings of the term see cardboard (disambiguation) .

Corrugated board - side view of different grades. 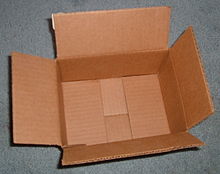 The term cardboard is taken from Latin ( pappare for pulp ); later the bookbinder's flour paste was called cardboard. The sheets of paper or parchment were pasted together with this paste - a process that has been known since ancient Egypt .

The material was imported from China in the 17th century and reached Europe via the Silk Road . In the West, the variant of paper glued together has been common since the 13th century - here mainly as a raw material for playing cards . The first mention of it comes from a printing manual written in 1683 entitled "Joseph Moxon's Mechanick Exercises" . In the 17th century, cardboard book covers also became popular. The material was also used by furriers , hat makers, weavers and shoemakers and for tubes for optical instruments. In 1817 the mass production of cardboard boxes began in England by Sir Malcolm Thornhill; Cardboard packaging was produced in Germany in the same year . The oldest existing cardboard box comes from Germany and was made in 1817 for a strategy board game called "The Game of Besieging". In 1890, the Scot Robert Gair invented pre-cut cardboard or cardboard packaging - flat pieces that were made as loose boxes. Gair's invention came about as a result of an accident: he was a printer and paper bag maker during the 1870s, and one day he was printing an order for seed bags. A metal ruler that was normally used to fold the seed bags cut them off. Gair discovered that by cutting and folding, he could make finished cardboard boxes in one go. Applying this idea to corrugated cardboard was a logical development when the material became available around the turn of the twentieth century.

The Swedish invention of the Tetra Pak in the late 1950s opened up another area of ​​application.

For the production of "wrapped cardboard", the highly diluted fiber suspension is pumped onto several round sieves, where the so-called sheet formation takes place and the material is dewatered for the first time by pressing. The fiber fleece obtained in this way is then wet wound onto a so-called forming roller until the desired layer thickness is achieved. By cutting open the cardboard cylinder, a sheet is created, which runs through a three-tier dryer and is then cut to the required format using a lengthwise and cross cutter.

For the production of "Fourdrinier board", the pulp is applied to a wire section, which consists of a lower and an upper wire. A headbox mounted transversely to the running direction ensures that the mass is evenly distributed. The fiber suspension is dewatered between the two wires, creating an "endless" fiber layer that is removed at the end of the wire and fed into a pressing area where the wet cardboard web is pressed out by felts . The residual moisture is then evaporated in a drying machine, the cardboard web is then smoothed and rolled out or cut directly into sheets.

“Machine board” usually consists of layers of different composition, with the top layers usually made of the higher quality material. Machine cardboard is produced by pressing several fiber webs produced simultaneously on cylinder and / or Fourdrinier machines together.

Paper , cardboard and cardboard are flat materials that are made from the same basic materials and in principle the same manufacturing methods. They are mainly distinguished in terms of weight per square meter . Cardboard according to DIN 6730 is used with a square meter weight of over 225 g / m 2 (approximately 1.5 mm thick), cardboard weighs 150–600 g / m 2 . The term “cardboard” does not officially exist. This is in line with the recommendations of the EU to standardize external trade relations.

In German usage, however, one speaks of cardboard if the weight per square meter is over 600 g / m 2 .

There are different types:

“It is not made of cardboard” is an older expression for: “It is particularly strong or resistant”. Originally designed as the one meant Papp or cardboard children referred to mush . So those who no longer ate the baby food, but ate solid food, consequently became "stronger" according to the vernacular .

In musicians' jargon, performance permits for stage performers were usually called “cardboard” (“amateur” or “professional cardboard”) because the official terms were not used with pleasure.

"I know my Pappenheimers" comes from the Thirty Years' War and refers to a phrase about Gottfried Heinrich Graf zu Pappenheim .

Today the material can hardly be replaced as a packaging material. But emergency notes or even furniture have already been made from it. Cardboard is used in many applications: cardboard boxes , paper cups , cardboard model making , roofing felt , beer mats .

The cardboard recycling code is 21.