Bales of waste paper in Italy

Waste paper is paper waste that is collected in households or businesses. It is for the production of recycled paper , newsprint and other products made of paper such as cardboard boxes used.

Waste paper container in the Westphalian town of Warendorf 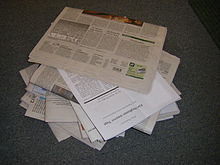 A stack of old paper

The following collection systems have proven themselves:

Due to the high demand for waste paper (a ton of the bulk type "mixed waste paper" is worth around 55 euros), more and more private waste disposal companies pushed into the waste paper market until mid-2008 and offered households free "blue bins" because, according to the Federal Association, they could be used Secondary raw materials and disposal (bvse) 20 to 30 percent more waste paper can be collected than with the bundle or container collection.

The municipal authorities often questioned whether the erection of the buoys is legally permissible. Therefore, a large number of municipalities and districts had issued prohibition orders, but these were often rejected as unlawful by the competent courts, so that it could be assumed that the collection of waste paper by commercial companies from private households was legally permissible. In June 2009, however, the Federal Administrative Court ruled that there is a “fundamental responsibility of the public waste disposal authorities” for waste paper and that citizens should not entrust private competitors with the collection of their waste paper. After the Federal Administrative Court had ruled, the Hanover Administrative Court confirmed in January 2010 that municipalities can prohibit collection (e.g. also private waste paper collections).

In the course of the worsening outbreak of the financial crisis in autumn 2008, the situation changed suddenly. According to the Euwid industry service, the average price for so-called mixed bales fell from around 100 euros to just 5 to 15 euros per ton. Some dealers even set the sale price to zero.

As a result of increasing demand on the one hand and the closure of capacities on the other, the price for a ton of mixed waste paper finally rose again significantly to 85 euros in March 2010, accompanied by noticeably increased delivery times for cardboard.

With a recycling rate of 72%, so much waste paper was separated, collected and made available for paper production in Europe in 2012 as nowhere else in the world.

The manufacture of the various types of recovered paper is based on the “List of European standard types and their qualities” drawn up by the paper industry and the suppliers of recovered paper. This list describes in the European standard EN 643: 2014-05 95 types of waste paper in their composition and quality. The number of standardized grades is constantly increasing, as paper mills develop techniques to process previously unusable qualities.

The first process for recycling waste paper was invented in 1774 by Göttingen university professor Justus Claproth , in which the printing ink was completely washed out of the printed paper and new paper was made from it. This process was then used for the first time by the paper mill Schmidt in Klein Lengden . The so-called de-inking process, which is based on the principle of flotation , is now the standard procedure in the recycling of printed products.