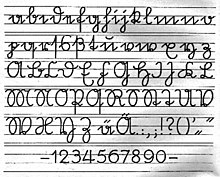 The Sütterlin script , usually simply called Sütterlin , is a basic script developed by Ludwig Sütterlin in 1911 on behalf of the Prussian Ministry of Culture and Education for learning to write cursive in school .

The Latin script developed by Sütterlin

In the 19th century in England it had become fashionable to write with the newly developed steel nib . The very oblique English cursive with its large ascenders and descenders and its variable stroke (swell) is decorative, but technically difficult to write. In Germany, too, the pointed pen quickly caught on and shaped the typeface of the 19th century. In Germany at that time two cursive scripts were written: Kurrent (also called the "German" script) and Latin script.

In order to make it easier for the children to learn to write, Sütterlin had them write with a ball point pen (equal draw) , simplified the letter shapes, reduced the ascenders and descenders ( ruling in a ratio of 1: 1: 1) and erected the relatively wide letters. In all of these features it is similar to the base scripts of Latin script that are widespread today.

The German Sütterlin script was introduced in Prussia from 1915 . It began in the 1920s to replace the form of the German Kurrentschrift, which had been common up until then, and in 1935 it became part of the official curriculum in a modified form (slightly inclined, less round shapes) as German Volksschrift . As a result of the normal writing decree , however, it was also banned in a circular of September 1, 1941, after the use of broken print (fracture types) had already been prohibited in a circular from Martin Bormann (head of the party chancellery ) of January 3, 1941 . After the German script was banned from schools in 1942, the Latin script was introduced as the starting script in a variant called German normal script (proportions 2: 3: 2, slanting, oval shapes). In West and East German schools after 1945, in addition to the Latin starting script, German cursive script was sometimes also taught until the 1980s.

In Germany there are various initiatives and associations that help to decipher texts in Sütterlin and other ancient scripts. Examples are the “Sütterlin writing room” in Constance and the Sütterlin room in Hamburg .

In mathematics in Germany until the late 20th century, matrices were designated by capital letters and vectors by lower case letters in the German Sütterlin script (instead of the Latin letters used today and an arrow above).