Broken script is a collective name for a series of Latin scripts in which the arcs of a letter are wholly or partially broken , i.e. H. arise from a writing movement in which one or more recognizable abrupt changes in direction in the line guide leave a visible kink in the sheet. In contrast to this are the round, non-broken fonts such as Antiqua , in which the arcs are created from an evenly flowing movement when writing.

Broken fonts do not use serifs as decorative borders at the ends of the letter shafts , but so-called quadrangles .

In the middle of the 12th century, the Gothic art style developed in Europe . One of the most noticeable changes in architecture was the transition from the Romanesque round arches to the broken Gothic pointed arches. This style element of arc refraction was subsequently also applied to the arcs of the lower case letters. This resulted in the first broken font, the Gothic minuscule , from the round Carolingian minuscule . 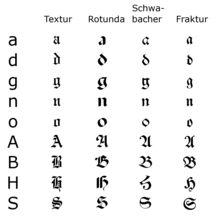 Overview of the differences in broken fonts

Broken fonts in typically faulty computer typesetting: Without ligatures, for example in the case of ch.

The broken scripts include:

According to DIN 16518 , the broken typefaces are divided into the five subgroups Gothic (Textura), Round Gothic (Rotunda), Schwabacher, Fraktur and Fraktur variants. One of the peculiarities of some of these fonts is the retention of the long s - previously also used in Antiqua - which, according to the rules, is used especially in the German language. The common lowercase letter s is referred to as the final s in this context .

The broken scripts are a deeply rooted part of European writing culture , but lost their importance in the course of the 19th century. Only in Germany did broken fonts remain popular well into the 20th century. At German-speaking schools, all students learned to read and write broken scripts. In 1941, the Ordinance on Normal Scripts banned broken scripts from school curricula and official script usage. After that, broken fonts quickly disappeared from everyday life as utility fonts in Germany as well. The last remnants can only be found on newspaper heads , signs , company logos and labels . As a typographical stylistic device, they stand for history , awareness of tradition , rural simplicity or folklore .

Since the 1970s, broken fonts have also appeared in youth cultures such as metal , hardcore and gothic . Here the fonts do not symbolize the maintenance of tradition, but the break with the prevailing contemporary culture.

Prison tattoos , especially in the Old English font , are common among skinheads and gangsta rappers . They tie in with a symbolism that the Viennese historian Heinrich Fichtenau summarized in his post-doctoral thesis in 1942: “The Antiqua is the script of the rational, cool, objective thinker; the fracture of that of the more subjective 'perpetrator', at least of the one gifted with high vitality, who so often only stands on the edge of an obligatory community without belonging to it in a serving manner ”.

Because of the low demand for broken fonts and the high material costs for lead letters, only a few print shops had leftover stocks of broken letters at the end of the 1980s. However, the situation changed with the development of computer typesetting . Commercial typefaces and freelance typographers now also digitized broken typefaces. Today, a wide variety of high quality fonts are available to every computer user. As a result, a new generation of typographers is rediscovering these centuries-old font families, not for ideological reasons, but rather out of an interest in the aesthetic and craftsmanship qualities of the broken fonts.

Rudolf Koch once wrote about the broken script: "Like dark firs with a spicy resinous scent, like when the blackbird calls out through the evening, like the delicacy of the meadow grass, the most glorious, most German script, we have loved you for a long time".

Johann Friedrich Unger wrote in 1793 about a possible abolition of the Gothic script: “Why should we Germans renounce originality here? To please foreigners who want to learn our language? Did any nation relieve us? - Getting to know characters is the work of a few hours for an adult, or at least is not considered at all. If you are serious about learning the German language, you will certainly not be put off by so little increased effort. "