This article treats the reed as a plant. For the story of the same name by Anna Seghers see The Power of the Weak .

The reed ( Phragmites australis ), also commonly referred to as reed, is a species of the genus reed ( Phragmites ) within the sweet grass family (Poaceae). It is widespread worldwide and some authors distinguish three subspecies, all of which also occur in Europe.

The leaves have one to two zigzag transverse folds ("donkey bite").

The reed is a rhizome - Geophyt and a marsh plant . The nominate form, Phragmites australis subsp. australis , reaches heights of growth of a maximum of 4 meters. In the main growing period of the reed, the rhizomes at the tip elongate by up to 3 centimeters daily. The oldest parts of the rhizome die off (root creeping and silting pioneer).

The leaves are divided into leaf sheath and leaf blade. Instead of ligule ( Ligula ) a fringe of hair is forehand. The flattening of the leaf blade, which is tubular like the leaf sheath, occurs through a joint.

The flowering period extends from July to September. The reed is a bluegrass . The paniculate inflorescence can be up to 50 centimeters long. Phragmites australis is wind-flowered of the "long-dust filamentous type". The spikelets contain male, hermaphroditic flowers at the base.

The spikelet axis of the fruit clusters has long, protruding hairs. The tiny spikelets spread like umbrella fliers. Spreading by swimming and spreading in water is also possible. The fruits are ripe in December at the earliest. The fruit set varies from year to year; it also depends on the location. The fruits are light germs, the germination rate is around 80 percent. The ability to germinate remains for one to four years.

The wettability of the leaf surface is poor. Water rolls off in droplets, as can also be observed with lotus flowers , and it takes dirt particles adhering to the surface with it ( lotus effect ). 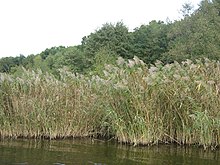 Up to 4 meters high reed belt on a lake

The vegetative reproduction takes place to a large extent through the up to 20 meter long runners and through prostrate stalks that take root at the nodes (laying stalks). Whole reeds often only represent a single plant. In the Danube Delta , experts found plants that were estimated to be around 8,000 years old. Large stocks of reeds offer shelter for numerous birds. However, if there is an excess of nutrients, the reeds displace the rest of the bank vegetation. If the nutrient input is too high, the population collapses again and is replaced, for example, by eutrophication pointers such as the large water plume ( Glyceria maxima ). If reed stands are to be actively increased, pieces of stalk with one to three knots must be cut off in summer and buried in gullies a few centimeters deep in the bank area. After a few weeks, the stalk nodes take root and daughter shoots form.

Reeds form natural monoculture stands at lakes and ditches. If the water supply and nutrient supply are favorable, it displaces other wild herbs and grasses through its dominance. In the natural monocultures of the reeds, which often cover huge areas , animal pests regulate themselves: the caterpillars of the reed owl ( Nonagria typhae ) climb up the internodes , eating, and then destroy the cone of vegetation at the top. Due to the associated thinning of the population, numerous thin stalks are formed in the following years, so that the common reed owl perishes in these places.

The reeds play a major role in the silting up of bodies of water. Over time, a lot of mud collects between the thick stalks and slowly silts up.

Some authors differentiate between the following subspecies:

The reed occurs frequently and consistently in the reed zone of standing and slowly flowing water up to a meter depth, also in spring bogs , on moor meadows or in alder and willow forests . It does not like too cold silt and mud soils, which should be nitrogenous and base-rich and can be relatively low in oxygen. It cannot stand torrential floods. According to the ecologist Heinz Ellenberg , the species is a heat pointer, an alternating water pointer and a class of character of the reed beds and large sedge swamps ( Phragmitetea australis ). But it also occurs in plant communities of the Scheuchzerio-Caricetea class, the Molinietalia order and the Alnion association. The reed indicates moving groundwater at locations that are not flooded. As a deep-rooter, it is difficult to drive out of wet fields. However, injured reed rhizomes die in prolonged flooding when water penetrates the ventilation tissue. Similarly, high groundwater prevents the rhizomes from growing deep.

In the Allgäu Alps in Bavaria, reed rises between Rohrmoos and the new Piesenalpe to an altitude of 1260 meters.

The psychoactive entheogens dimethyltryptamine (DMT) and bufotenin were found in the rhizome of Phragmites australis .

Economic and industrial use

The young sprouts are used as vegetables in some areas, although the typical reed taste of this type of sweetgrass takes some getting used to, and flour for baking bread can also be made from the dried roots.

In ancient times , the writing tube cut from a reed stalk was the most important writing instrument for centuries . Around the 6th century it was superseded by the quill (made from a bird's pen ) in Europe . It is still used for calligraphy in the Islamic culture .

Thin mats made of reed are used to shade greenhouses, while thicker ones are used as thermal insulation or wind protection. The species is also used for the decorative design of bank areas as an ornamental plant and for land reclamation (e.g. in the IJsselmeer ).

For centuries, the mats were made by weaving . The factories called cane weaving originally used the reeds cut on frozen lakes in winter. It was dried in the open air for a year, then stored dry and airy for a few more months and only then could it be woven into thin mats, mostly knotted by hand. Machine-made reed mats from the hardware store only have a short shelf life of around two years, whereas the hand-made mats last several years. In the meantime, miscanthus reeds for mats are grown on wet surfaces and harvested with bar mowers. In the Brandenburg Pritzerbe there will be the only remaining reed weaving mill in Germany in 2020.

Cane mainly plays a role as a natural building material . It is used in the form of reed as roofing materials and in the form of multilayer reed plates (20 and 50 mm, bonded with galvanized wire) or simple reed as a plaster base ( Rabitzgeflecht ) as a building material in the clay building . The reeds do not absorb moisture and therefore only rot slowly, they are stable and, thanks to their non-slip surface structure, an excellent plaster base. Because of its silica content , reed is also fire retardant. Further construction elements are insulation materials for external and internal insulation, reed fabric or partition walls for ecological drywall .

Reeds are very suitable for planting a sewage treatment plant . Due to the large leaf surface and the release of oxygen from hollow, air-carrying stem parts ( aerenchymes ), it has a water-cleaning effect under water (oxygen input: 5–12 g oxygen per m² / day). The oxygen input promotes the microbial breakdown of organic matter by aerophilic bacteria, which colonize in large quantities on the root hairs of the reeds.

Also, retention soil filters are often planted with reeds to achieve improved performance. The reed growth is supposed to loosen the substrate through its permanent rhizome growth and thus reduce the risk of colmation . An intensive root penetration increases the cleaning performance of the filter, as oxygen input and root exudates stimulate the microbial degradation of pollutants in the rhizosphere, while nutrients (and sometimes pollutants) are withdrawn from the soil solution.

An established reed area transpires 800–1000 l of water per m² and vegetation period, which reduces seepage in the soil filter accordingly. This favors sorption and - due to the longer contact time - also the uptake of roots and biological degradation.

The closed vegetation cover improves the microclimate near the ground through shading and insulation. Even in winter, bacteria can still find temperatures of +5 ° C under dead reeds.

Reed stalks as well as the continuous scattering of wide-meshed vegetation residues form an above-ground spatial filter on soil filters . Its sedimentation surfaces complement the actual substrate filtration and also protect the filter from external colmation .

A major disadvantage of the use of reeds in soil filters is that soil filters do not belong to the ideal colonization areas for reed grass due to the periodic supply and short residence times of the water. The result is high growth failures on the temporarily dry soil filters. This means that the weakened reed vegetation does not guarantee an optimal cleaning and filtering effect in relation to the wastewater supplied. In addition, reeds are sensitive to mechanical stress, especially to buckling stress (dropping the stand in the main flow area).

Reed is assessed positively by nature conservation agencies when it comes to compensation for interference according to Section 8a of the Federal Nature Conservation Act . In contrast to conventional solutions, reed-planted filters were even permitted in nature and landscape protection areas . In addition, reed-planted soil filters in combination with green areas and green pavement can help avoid additional compensatory measures for new development areas, which is becoming increasingly important in economic considerations.

To do this, the sewage sludge is fed into large reed beds. The water evaporates over the large leaf surface and the sludge is drained. At the same time, microorganisms living in the root space of the reeds biodegrade the sludge, resulting in humus-containing sewage sludge soil. The drainage and composting process runs continuously over 6 to 12 years, during which the composting bed gradually fills up. The sewage sludge is then dredged and can either be disposed of thermally or used as fertilizer in agriculture.