Calligraphy , also written calligraphy ( Greek καλλιγραφία kalligraphía , from κάλλος kállos , German 'beauty' , and graphics ) is the art of “ writing ” by hand (chirography) with a quill pen , brush , felt pen or other writing tools. Calligraphy is in contrast to typography , setting with prefabricated forms. In school subject penmanship is not taught calligraphy writing, but legible writing.

The reputation of calligraphy is given in cultural history wherever the copying of sacred texts is classified as a sacred process: for example, traditionally in Christianity when copying the Bible or in Islam , where the Basmala is the most common form of calligraphy. Calligraphy is still important and inspiring for the Chinese and Japanese writing culture . Achieving perfect aesthetic balance and making emotions visible is more important than legibility.

Many calligraphers point to the almost meditative nature of their work:

"The calm of this work fills the whole being with a comprehensive satisfaction, where time and space, as if wiped away for a short time, no longer bother us or burden us."

Sample of the Textura quadrata used in the High Middle Ages

In western medieval culture, calligraphy played a role that could hardly be overestimated as the only known form of transmission of literature. However, in order to keep the texts clearly legible at all times, the script was only changed calligraphically to a certain extent, for example in the form of abbreviations (abbreviations) and ligatures (interlacing of letters). The actual book decoration in Europe always extended to the pictures and illustrations, since in Christianity there is no ban on pictures , unlike in Islam and Judaism . In Germany, Augsburg and Nuremberg in particular were centers of book and script art. Ulrich Taler from Augsburg and the Glockendon and Neudörffer families from Nuremberg were well-known font artists. The actual calligraphy was used as a separate art form rather in the area of ​​headings. In the Renaissance and Baroque periods , as a response to printed writing, which was not perceived as too beautiful, the actual European calligraphy, which was consciously oriented towards the beauty of writing, emerged, especially in Italy, France and England. Special writing master books show a high level.

Even if calligraphy has lost a lot of its prestige in Europe since the beginning of modern times, it is still alive as an art form and hobby and has even experienced a certain renaissance since the introduction of home computers. It is used in practice when designing certificates, posters or entries, e.g. B. in a golden book .

All over Europe you can find historical works by ancient and medieval calligraphers, many of which were created in monasteries and impress with their expensive furnishings and rich details.

More recently, a well-known calligrapher z. B. Edward Johnston , who became famous for his Foundational Hand and the sans serif Johnston Sans , which is still used on the London Underground to this day.

Since the Talmudic era, Sofer (emphasis on the "e") has been the name of a writer of Hebrew texts. The job of the sofa requires years of training and is very respected within Judaism . The biblical texts are written with a bird's feather ( goose quill ) and ink without metal additives, which the Sofer usually produces himself. The base is always a hand-made parchment only for this purpose . The Hebrew texts are unvocalized , but have special decorations, which are also known as crowns. The texts must be written precisely and without errors. The sofer must not write from memory, but must copy each letter individually from the template . 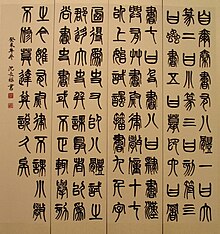 In Asia, mainly in the Chinese region, Korea and Japan, calligraphy still has a high status in social and artistic life. The most commonly used tools are brushes , ink sticks and ink stones , as well as paper as an essential part of the writing process. Before actually writing, the ink is rubbed from the ink stick in the grater with water or wine. Nowadays the act of writing is often impulsive, which makes the characters difficult to read, but all the more expressive. Font styles such as grass script even deliberately place the actual text and its legibility behind the calligraphic design; even educated Chinese are often unable to read grass script. They are considered an image, not text.

Calligraphic works of art adorn the Chinese garden as paired vertical tablets and as horizontal nameplates. They are almost inseparable from the garden structures and form important decorative elements in the Chinese landscape garden . The content of the boards and signs is generally related to the surroundings of the buildings. Often these are lines from famous poems, in which special features of the scenery are indicated.

Due to the prohibition of images in Islam , the cursive Arabic script was used in calligraphic works of art like lines, creating images from letters, so-called calligrams . Since calligraphy was the only permitted art form in most countries in the Islamic world, it is the main decorative element in architecture in the Islamic world.

One of the most elaborate styles of Arabic calligraphy, Ottoman calligraphy , developed in the Ottoman Empire by the beginning of the 20th century .

Egyptian calligraphy is a special form of Arabic calligraphy. Egyptian hieroglyphs were traditionally written on papyrus with a pointed bamboo pen.

Portal: Font  - Overview of Wikipedia content on the topic of font