A fountain pen , also briefly fountain pen , fountain pen or filler called, is a writing instrument in stick form, which by means of a metal spring ink on paper transfers. The ink flows via an ink feed through capillary action from a reservoir (e.g. ink cartridge , converter or the tank in the piston filler ) to the tip of the metal spring, where it is absorbed by the paper. Nowadays, fountain pens are mainly used in school education. 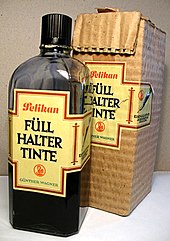 In 1636 Daniel Schwenter from Altdorf constructed a nib with three nested goose quills , which are still used in calligraphy today. Two Dutch travelers had seen the first fountain pen in Paris in 1656. Such a device is described by the author Armand Prosper Faugère in the “Journal d'un voyage à Paris en 1657–1658”. The oldest historical record of a pen holder dates back to 1657. Around 1786, the Leipzig mechanic Scheller built a “travel pen with constant ink”. The earliest surviving fountain pen dates from the 18th century. Progress in development was slow until the beginning of the 19th century, after which it accelerated and the number of fountain pens produced increased. Three decisive inventions were decisive for the success: that of the gold nib with an iridium tip , the hard rubber and that of the evenly flowing ink. 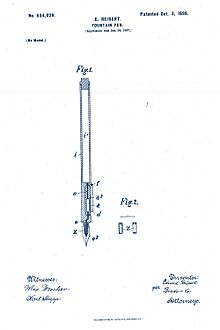 The first penholders equipped with these key technologies appeared in the 1850s. The Scottish engineer Robert William Thomson patented his fountain pen as early as 1849 , which he exhibited at the first world exhibition in London in 1851 .

In Germany, the manufacturers Friedrich Soennecken in 1871 and Koch / Weber in 1872 began with the production of penholders; Soennecken and KaWeCo became the main producers in Germany in the early years. The invention of the tension spring for writing circulars by Soennecken was another innovation that made modern writing with pens possible.

With the patent application on February 12, 1884 by Lewis Edson Waterman's ink pen, the era of the fountain pen began. In its first business year, the Waterman Company produced 200 fountain pens on a kitchen table in the back room of a cigarette shop in New York. The first American producers in this pioneering period were Waterman in New York City , Wirt in Bloomsburg ( Pennsylvania ) and Parker in Janesville (Wisconsin) and Sheaffer in Fort Madison, Iowa .

The co-founder of the Hennef Maschinenfabrick Reuther & Reisert ( Chronos-Werk ), the engineer Eduard Reisert , applied for an international patent in 1899 for a fountain pen with an ink container and hose . This first lever fountain pen was a further development of the fountain pen patented by Waterman in 1884. The innovation consisted in the installation of a hose and a pressure lever that only ensured the flow of ink when writing and thus prevented blotches. For production, he founded the Klio Werk GmbH special factory for fountain pens and office furniture in Hennef an der Sieg in 1901 . In the following years this lever fountain pen was marketed as a patent fountain pen Klio in advertisements and catalogs. 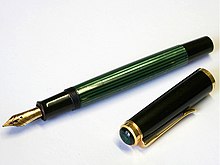 Montblanc was founded in 1906/1908. The Pelikan company acquired patents for fountain pens with solid ink from the Croatian chemist Slavoljub Eduard Penkala and in 1925 the patent for the modern piston fountain pen from the Hungarian engineer Theodor Kovács and did not start producing fountain pens until 1929.

In the following decades there were many technological innovations in the manufacture of writing implements. Celluloid gradually replaced the vulcanized hard rubber, allowing the production of a much wider range of colors and designs . At the same time, manufacturers experimented with new filling systems. The interwar period saw the introduction of some notable models - such as the Parker Duofold and Vacumatic , the Sheaffer's Lifetime Balance range , the Toledo fountain pen and, from 1929, the Pelikan 100 . In 1949 a new piston filling system came onto the market, which Soennecken had already patented in 1939. At this time, the Waterman Company experienced its economic decline in the USA and was sold to the competitor Parker.

During the 1940s and 1950s, fountain pens maintained their dominant position among writing implements because early ballpoint pens were expensive, tended to leak, and had irregular ink flow, while fountain pens continued to benefit from the combination of mass production and craftsmanship. This period saw the introduction of innovative models - such as the Parker 51 , Sheaffer Snorkel and Eversharp Skyline - while the Esterbrook J series of lever filler models with interchangeable steel nibs offered inexpensive and reliable mass products.

From the 1960s onwards, the ballpoint pen gradually replaced the fountain pen in everyday life due to improvements in production. Although cartridge fountain pens are still in use in Germany and France - especially at school - some manufacturers are now marketing their fountain pens as a collector's item and status symbol and not (only) as a writing instrument for everyday use. These include in particular the brands Montblanc , Montegrappa , Faber-Castell with the Graf von Faber-Castell line and Pelikan with the Majesty, Souverän, Toledo, Limited and Special Edition series.

The two technologies already mentioned for filling existed until the 1970s: the ink sack (usually made of natural rubber) and the ink cylinder with piston.

Usually the piston was operated via a threaded rod with a rotary knob at the rear end, clearly visible at the bottom right (green pen with black end). In some models (e.g. from Pelikan) part of the cylinder was made of transparent acrylic, so that the fill level was visible from the outside.

In the case of devices with an ink sack, the lever lift - visible on the blue fountain pen at the top right - dominated, especially in the USA. Although this is easier to use; however, if it is accidentally actuated, the entire ink supply is emptied. This is less likely with the piston lift, but the rotary movement when filling inevitably creates a "wobble" and thus often also blobs.

From 1970 onwards, both designs were largely superseded by the advent of single-use plastic ink cartridges: These are only pierced when inserted through the ink tube; if used properly, ink spilling is practically impossible.

Along with the mass-produced pencil and the introduction of cheap paper on wooden base were pen responsible for a far-reaching revolution in the way of writing and the form of paperwork during the 19th century. They became the forerunners of the modern office that emerged around the end of the 19th and beginning of the 20th century with the gradual introduction of the typewriter and the early copier .

The fountain pen and, to a lesser extent, the pencil replaced the difficult-to-use combination of immersion nib ( pen ), inkwell and extinguishing cradle or sand that was previously used for writing. Using a dip pen was a complicated and often frustrating affair because of the irregular flow of ink and the tendency to blotch.

Fountain pens are generally considered to be the most suitable writing tools for writing or drawing with ink on paper. However, they are more expensive, more difficult to maintain and more sensitive than ballpoint pens. In addition, they can not handle the various pigments, shellac - iron gall - or acrylic inks and used -tuschen as artists preferably in combination with (immersion) steel springs, quills or Bourdon tubes are used (exceptions: pelican füllfederhaltertaugliche, pigmented Fount India and the Kiwa-Guro Black Pigment Ink from the Japanese manufacturer Sailor).

Learning to write with a fountain pen is the last step in learning how to use basic writing implements in elementary school and is used for systematic practice in connected writing. Using crayons and pencils is learned in most federal states in the second grade. While mastering the usual depending on the Land is cursive already provided. The rollerball pen is usually not an intermediate step between pencil and fountain pen, but is often an alternative for children who cannot cope with handling a fountain pen. Writing with a quill forces the writer to adopt a correct posture, control over the pressure on the paper and careful handling in order to avoid leaking or stagnant ink flow. The use of ballpoint pens is therefore generally not allowed in the first years of primary school .

The handling of a pen writing instrument is complex and requires skill and fine motor skills, which not all students can muster equally. Possible alternatives, the compulsion to use fountain pens and the inconsistent points of view of the teachers are controversially discussed in parenting forums. The practice of the symbolic “fountain pen driving license”, which is issued to pupils once they have learned to use the fountain pen, is therefore widespread.

The nib is the main differentiator between fountain pens and ink pens .

The nib of a fountain pen is usually made of stainless steel or alloy gold . Modern springs are provided with a hard, durable tip, usually a platinum-containing alloy of the nickel group or iridium. The material of the tip is popularly referred to simply as iridium , although not all manufacturers still use this special metal in their alloys for the nibs. Steel nibs also usually have tips made of a harder metal, since pure steel tips wear out relatively quickly on paper. Recently, springs have also been made from titanium.

The nib is usually made with a thin cut from the center to the tip through which the capillary action causes the ink to flow from the reservoir to the nib tip. Common fountain pen nibs have the tip narrowing to a point, causing the ink to be drawn onto paper in a thin, even line. Wide calligraphy nibs sometimes have several such incisions towards the tip in order to increase the flow of ink and thus to fill the wide lines evenly with ink. Pointed nibs with two incisions are generally referred to as note nibs , because the double notch enables a great contrast in line width, which is necessary for writing musical notes .

Although the usual nibs have a point-shaped tip, which are available in different sizes (often: F = fine, M = medium, B = wide, more rarely: EF = extra fine, BB = double-wide), nibs with other tip shapes are also available. Examples are springs that are bevelled on the left or right (oblique, reverse oblique), wide springs that result in a band or alternating pull (stub), and elastic, narrow springs, usually without a hardened tip (italic).

Fountain pens from the first half of the 20th century usually have a flexible nib, which was needed for writing the preferred manuscripts of the period. From the 1940s onwards, the preference shifted towards stiffer tips that could withstand the greater pressure required to write through copy paper to create carbonless documents ( carbonless nib ). The glass nibs, which were also offered in completely normal piston fountain pens at times, also served this purpose. 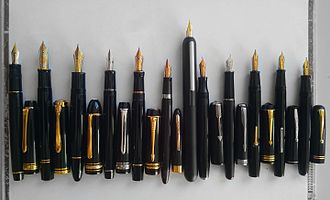 In addition to mass-produced goods, fountain pens can also be found as handicraft products - similar to mechanical watches and other (historical) everyday objects. Elaborate cases for fountain pens are made of special metals, other noble materials and sometimes with jewels . Still other fountain pens are hand-decorated with an elaborate lacquer design known as Maki-e from Japan . Lovers collect and use old and modern fountain pens, and they exchange information about old and modern inks, inkwells and bottles. When it comes to historical writing implements, collectors prefer either those that can actually be used for writing or purely technical and museum exhibits or jewelry as an investment.

The most expensive fountain pens are made by jewelry and writing tool manufacturers in limited editions, including Tibaldi, Montblanc and Caran d'Ache . The prices are usually not justified by their material value, although gold, diamonds and other expensive materials are also used. It's more about the collector's value and the limited edition. Some models have prices that run into the millions. The two most expensive examples are the Monte Celio from Montblanc (selling price 2.4 million euros, 2014) and the “Fulgor Nocturnus” from Tibaldi (auction proceeds 8 million USD, 2010).

“Disposable” fountain pens, which cost only a few euros, are at the lower end of the price range.