A pencil is a writing instrument with a lead which is embedded in a shaft. The graphite used to manufacture the mine until the late 18th century was mistaken for the lead ore galena ( galena ). Prior to Lead pencil were used with lace made of genuine lead and the term "pencil" ( colloquially sometimes Bleier ) has survived to this day. The mine has been baked from a graphite- clay mixture since the 19th century . The shaft is usually made of wood, often from the wood of the Virginian juniper called cedar . Mechanical pencils and mechanical pencils with plastic or metal sheaths are also common . 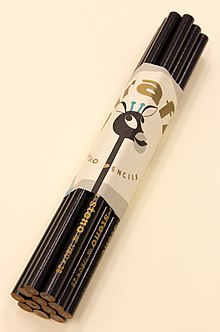 Lead leaves a trace similar to graphite on paper and was used for writing from an early age. 5000 years ago, the Egyptians are said to have filled reeds , bamboo canes or papyrus canes with liquid lead and used them as writing tools. From Pliny it has been handed down that in antiquity pure lead pencils ( Latin stilus plumbéus ) were used due to the favorable abrasion properties of the metal . In ancient times, small, round lead disks were also used to draw lines. In addition to the real lead pen with a lead tip, silver pens were also used for writing and drawing. Towards the end of the 18th century, lead pens or real pencils made of lead and silver pencils were replaced by graphite pencils. The term pencil remained, however, and is still confusing, even in the art scene.

In the northern English town of Keswick pencils were made from 1558. The graphite deposit discovered in nearby Borrowdale in 1564 played a decisive role in the spread of the pencil. By the 1660s, graphite rods made from Borrowdale graphite set in wood were used in many countries. At that time graphite was thought to be lead ore, from which the misleading name pencil is derived.

The English pencils became known in Germany around 1680. In 1726 there were pencil makers in Stein near Nuremberg . The young industry was given special protection by the Bavarian government; In 1766 this gave Count Kronsfeld the concession to set up a pencil factory in Zeltenbach .

In 1778, the German - Swedish chemist Carl Wilhelm Scheele proved that the raw material that had been used for almost 200 years was a carbon- based mineral and not lead. It was not until ten years later that the mineralogist Abraham Gottlob Werner gave it the name graphite, which is derived from the Greek word graphein (German: to write). Since the pure graphite from Borrowdale was mostly used for military purposes, for example for the production of crucibles for cannonballs , England temporarily imposed export bans , whereupon the procurement costs rose enormously. Until then, only Borrowdale graphite was considered pure enough for writing. 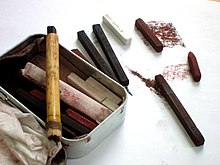 In 1790 the Viennese Joseph Hardtmuth mixed graphite dust with clay and water for the first time and burned it in an oven. Depending on the amount of clay, he could determine the degree of hardness. Joseph Hardtmuth later founded the Austrian company Koh-i-Noor Hardtmuth ( Persian for "mountain of light", after the famous Koh-i-Noor diamond). His grandson Friedrich von Hardtmuth refined the groundbreaking invention and in 1889 created the Koh-i-noor pencil with 17 degrees of hardness.

In 1795 the Frenchman Nicolas-Jacques Conté discovered a process that could also use impure graphite from mines in Germany and Austria. He pulverized the degraded material and then slurried the graphite. Later he discovered the degrees of hardness independently of Hardtmuth. Hardtmuth and Conté are considered to be the cornerstone of the success of the modern pencil. This technology was widespread by the middle of the 19th century and led to the founding of the companies Faber-Castell , Lyra , Staedtler and Schwan-Stabilo in Nuremberg and the surrounding area .

Technical drawing with pencils on the drawing board

In Germany, pens were initially called tear lead, writing lead or water lead , then pencils or white lead pencils . Until the 20th century, the pencil was often called in German after the French word crayon .

According to its shape, the exhibition tower in Frankfurt is also called “pencil” and the Tour du Crédit Lyonnais in Lyon is called crayon .

The pencil is mainly used for drawings , technical or artistic sketches , for shorthand or for taking notes, and as an exclusive writing implement for beginners . Its advantages lie in the ease of use, the possibility of writing with the tip up, a comparatively high lightfastness , the relative smear resistance and the possibility of removing what has been drawn or written with an eraser .

The ability of pencils to write is based on the layer-like crystal structure of graphite, the so-called graphene layers, which are a modification of carbon . There are only very weak van der Waals interactions between them . Therefore, these layers can easily be shifted from one another and rubbed off when writing on a surface.

The mixed raw materials are pressed into a strand through a nozzle and then cut off. This is then dried and then fired at approx. 900 ° C. The finished lead is then refined with wax or palm oil , which enables smooth abrasion.

Grooves are milled in wooden panels into which the fired leads are then inserted. The plates with the leads are each glued to another plate. They are then sawn into pencils and often painted. For a long time, cedar was considered the most suitable wood for pencils because it can be easily cut with a sharpener due to the few knotholes . However, since cedar wood grows slowly and is therefore expensive, pine wood is also often used today. Also, maple and linden suitable for the production of pencils. In the GDR , due to the lack of cedar wood, other types of wood were used, which were interspersed with a mushroom to make them smoother .

The cross-section of the pins is usually hexagonal so that they do not roll away on an inclined surface; Furthermore, this variant is easier to manufacture than, for example, round pencils. Stenographers, however, use round pens because they do not press their fingers so hard when they write for hours. The exact centric position of the lead in the wood is a quality feature.

There are four basic strengths named after English hardness names: B ( black , "black"), HB ( hard-black , "hard-black"), F ( firm , "firm") and H ( hard , "hard"). The strength H is divided into nine strengths from H to 9H and the strength B into nine strengths from B to 9B, whereby the greatest strengths differ slightly from manufacturer to manufacturer, which makes comparability difficult. The medium-hard strengths were mainly used in the field of technical drawing because they remained pointed for longer on the rough drawing board, while the soft strengths are more suitable for artistic use. Strengths between 3B and H are best for writing.

There is neither a standard test method nor an absolute yardstick for determining the hardness of pencils. A technical committee of experts under the auspices of the International Organization for Standardization (ISO) tried over 15 years to develop a reliable and repeatable test method for determining pencil hardness and a corresponding standard. It was noticed that the Japanese HB pens were about one degree softer than those of the European manufacturers, which in turn were one degree softer than in the USA. But it was not possible to agree on an internationally consistent standard for pencil hardness, so that there are three different "standard" HBs:

The Derwent company has had its own in-house standard since the early 1950s; Faber-Castell set a standard with the 9000 series in 1960, which was used for several decades as an original pencil for the hardness of the Castell pencil leads. In 2001/2002 a review of the current production with the degrees of hardness defined in 1960 showed that a slight shift in the degrees of hardness had occurred over the years. In the course of creating a new standard, which was based exactly on the specifications of 1960, the degrees of hardness were therefore adapted to the original standards, whereby in addition to the blackening, the abrasion in millimeters per writing distance with a defined contact pressure is the essential criterion for Castell- Represents 9000 mines. 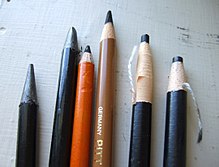 The pencil is not only suitable for writing, but also for drawing pictures. The most impressive feature is the ability to create very fine lines, which is not possible with comparable materials such as pastel chalk and charcoal . The pencil was often used in classicist portrait drawings and the landscape drawings typical of the Romantic period because of its fine lines. There are also graphite pencils in degrees of hardness B to 9B, which consist of a thick graphite lead with a foil or just a layer of lacquer as a coating. They are particularly suitable for sketching and coloring large areas. Outstanding representatives of the art of pencil drawing in the 19th century were Jean-Auguste-Dominique Ingres and Adolph Menzel .

The woods used for pencils are planted by most manufacturers in specially set up plantations . The paint on the pen is often harmful to the environment, which is why many well-known manufacturers now use water-based paints that are considered environmentally friendly or do without paintwork entirely. The graphite lead, on the other hand, is completely harmless.

The pencil production of the four Nuremberg companies amounts to well over three billion copies annually, Faber-Castell alone, the world's largest manufacturer of pencils, comes to around 1.9 billion. The wood used is mostly imported by ship from South America , while the graphite is imported from mines in Asia . 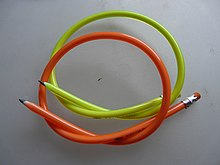