A stylus is a writing or drawing instrument with a water-soluble colored mine . Lacquered wood, like pencils , is often used to sheath the lead .

A freshly sharpened copier pencil has a metallic, often purple, shiny lead that turns matt and dark after a few hours. The leads can be sharpened like needles, but are at the same time very brittle. Copy pens are often cylindrical, but pencils are usually hexagonal, but there are exceptions.

Since 1862, the General German Commercial Code mandated all merchants to keep a "copy or copy" of the commercial letters they sent (today: Section 238, Paragraph 2 of the German Commercial Code ). The invention of the copy press in 1780 by James Watt made it possible to make copies with the help of special writing inks. After the synthesis of the aniline dye methyl violet by William Henry Perkin in 1856 , it became possible to incorporate a copyable dye into a writing lead. The Schwan pencil factory (today Schwan-Stabilo ) claims to have brought the first copier pencil onto the market in 1875. Kopierstifte allow document proof copying of commercial letters.

Before the invention of the ballpoint pen , the copier pen was very widespread as a document-proof writing implement. However, around 1955, the Deutsche Bundespost allowed registered letters, but not cash payments, to be acknowledged with a copier.

The production of the copier pen is roughly the same as that of the pencil , apart from the colored lead. It consists of tar dyes such as B. methyl violet , phenol blue , resorcinol blue , aniline blue , nigrosine for black and eosin for red. Other ingredients are fats , binders and minerals such as oily clay , talc and kaolin according to the colored pencil . These dye mixtures are more (aniline blue, nigrosine) or less (eosin, methyl violet) toxic.

A prick with a copying pen usually enters substances or broken mine components into the wound, which can lead to poisoning and slowly progressing tissue damage. Therefore, some security measures are useful, e.g. B. Do not sharpen on both sides, do not blow away pointed waste and, above all, put on a protective cap for transport. Copy pens with the dye methyl violet were also provided with warnings to use a protective cap. In 1940, the trade association for the chemical industry published a leaflet on the dangers of copier pens (ink pen leaflet).

A few copies of a document can be produced from the copy writing by pressing on a damp, advantageously thin and transparent paper , similar to the copying press according to James Watt . This dissolves the dye and soaks it up into the paper. On the reverse side of the transparent paper, a copy of the document that can be read correctly (through the paper) is created. However, this use was quickly forgotten with the spread of the typewriter , with which several copies can easily be made with the help of carbon paper .

When used dry, the typeface is not very color-intensive or resembles a pencil line (depending on the version). Only when moisture is absorbed does the color clearly emerge and bond with the paper fibers. The conversion through absorption of the air humidity is relatively slow and can take up to two days. For this reason, the tip of the copier was typically licked or put into the mouth briefly before and during use, which can still be seen in silent films. The color strength on the paper increases significantly and immediately. Before the toxicity of these pens became generally known, a (mostly purple) color stain on the lip or tip of the tongue of company officers , secretaries, nurses, librarians etc. was a sign of paperwork. Discoloration on fingertips and nails can also be traced back to these pens. 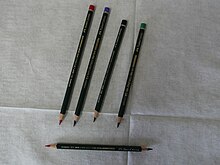 Copy pens are still in use today. In contrast to pencil writing, copier pencil writing is extremely difficult to erase, as some of the substances processed in the lead form an inseparable bond with the paper, similar to iron gall ink . Therefore, layers of paper have to be ripped off when erasing, which is later visible to the naked eye. Copy pen writing is less UV- resistant and fades over time, but with increased humidity it immediately regains its color strength. There are therefore also copying pens that also contain graphite or soot . The distinction between pencil and copier pen, which both appear gray when dry, can be made using moisture. The pencil writing turns irreversibly purple.

When making elections, copier pens can be used alongside other pens.

Two-colored copier pencils, sharpened on both sides with a red and blue lead, were originally used in bookkeeping. They are also suitable for correcting examination papers (red for errors, blue for correct) and are sometimes still used by schools and universities for this purpose.

The frequency of the colors used was based on a color hierarchy valid in many companies and offices for the signatures. The simple accountant signed in blue, the department head or director with red and the general director or authorized signatory with green.

Eosin and methyl violet are used to stain cells in histology . Red or purple pencil lead dissolved in water can therefore also be used for microscopy to stain bacteria and cells, which are usually also killed by the dye.

Copy pens are indelible and are therefore still used today, albeit not often, instead of fountain pens or ballpoint pens for signing checks, documents and contracts and in accounting .
Since they can easily be mistaken for pencils, the uninformed user may not notice that he is using a document-proof writing implement. Restorers check documents that seem to have been written in pencil before deciding on the appropriate restoration technique. B. soaking a copier pen would lead to bleeding of the dye.

Because there are also erasable ballpoint pen types and many non-indelible inks for fountain pens , the use of purple marker pens remains a reliable method of signing. Notaries and lawyers who value traditions, they can serve as symbols of permanence.

Copy pens are also used by the military in the field for handwritten reports as a document-proof writing instrument that writes on wet paper even in the cold, in contrast to ballpoint or fiber-tip pens.