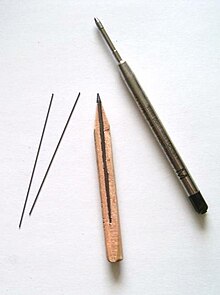 A mine (presumably from Latin minerum "ore-containing rock", since the first pencils were made of lead ore ) is a stick-shaped supply of writing material. It occurs in various writing and drawing implements such as pencils and compasses or ballpoint pens . It is either an integral part of the writing instrument (e.g. lead and colored pencils ) or can be exchanged for high-quality ballpoint pens and mechanical pencils .

Originally, from the 16th century, the mine was a cast lead stick in a wooden casing. It was used like a silver pen for writing and drawing. Since the invention of Kaspar Faber in the 18th century, it has consisted of ground graphite , sulfur and antimony and , in the case of colored pencils, also of color pigments ; the fabrics are stabilized by synthetic resins . This process was finally patented in 1795. If the lead breaks off or becomes blunt, you can make it writable again with a pencil sharpener .

Ballpoint pen refills consist of a plastic or metal tube or a closed cartridge that contains an ink-containing color paste.