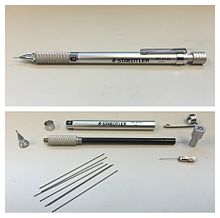 A mechanical pencil , the case pencil or mine Schreiber (rarely also mechanical pencil ) was used instead of by sharpening regularly ablated timber casing for the writing lead a reusable shell of plastic or metal . In contrast to pencils and colored pencils with a wooden jacket, a pencil extender is therefore never required, because the handling remains the same regardless of the lead length.

Patent drawing of the “mechanical pencil” by Sampson Mordan

"Criterium 2603", a French mechanical pencil from the 1950s, including a wooden lead pen

Mine guidance and transport

The earliest surviving example of a mechanical pencil was found in the wreckage of the HMS Pandora , which sank in 1791 . In 1822, Sampson Mordan and John Isaac Hawkins received the first patent for a refillable pencil in Great Britain . After he had bought out Hawkins, Mordan sold the pencil between 1823 and 1837 together with his partner Gabriel Riddle under the brand "SMGR". After the end of the partnership, Mordan produced the pencils under the name "S.MORDAN & CO." The company produced until the Second World War when the factory was destroyed by a bomb attack.

In total, more than 160 patents were issued between 1822 and 1874 on numerous different improvements to mechanical pencils. The first pen with a spring device was patented in 1877, and a rotating mechanism was developed in 1895.

In 1915 Tokuji Hayakawa brought a fine lead pencil to the market in Japan under the name Ever-Ready Sharp Pencil , which was based on a screw mechanism. However, it was not successful until a company from Yokohama placed a bulk order. The pen later gave the manufacturer its name: Sharp .

The immediate forerunner of today's most widespread variant (with clamp pliers) was an invention of the American Charles Rood Keeran . In 1913 he applied for a patent for his development, which was registered in 1915. From this point on, Keeran's pens were sold under the brand name Eversharp .

The most common form of a mechanical pen today uses leads with a thickness of 0.2 mm to 1.18 mm, which are held in a guide by clamping pliers. The lead is advanced a few millimeters by slightly opening the clamping pliers using the push button on the pen head or on the side surface. Additional leads can be stored in the jacket of the pen. The guide can be rigid or spring-loaded, depending on the application in the technical or, more rarely, in the artistic field. The usual length of the leads is 60 mm.

The mechanical pencil (also: TK pencil ) is the forerunner of the fine lead pencil and is similar to it, but the leads are thicker (typically: 2 mm; up to 6 mm) and longer. Pliers in the tip of the pen hold the lead in place. It can be released at the push of a button so that the mine falls out. There are pencil leads in all degrees of hardness and colored pencil leads to match the pens .

The lead is sharpened with sandpaper or with a special sharpener (also Dahle , Spitzmühle , Gedess ). Some pens have a sharpener built into the cap.

Clutch pencils were widespread in the 1970s and 1980s; today mechanical pencils are more common. Clutch pencils are mainly used for drawing and sketching. The particular advantage is that the lead can be sharpened or ground differently depending on the application (e.g. chisel-shaped for drawing lines). In addition, the leads are more break-proof than the usually thinner leads of mechanical pencils.

Leading the lead in an enlarged view