Yokohama ( Japanese 横 浜 市 , - shi ) is a designated city and administrative seat of the Japanese prefecture of Kanagawa, as well as an important industrial and commercial city. Yokohama is part of the metropolitan area of ​​Tokyo . It is - after Tokyo - the second largest city in Japan and thus the largest municipality in the country.

Yokohama is located on the western side of Tokyo Bay and has an important trading port.

Until the opening of the seaport in 1859, there was a fishing village at this place. When in 1853 the US commodore Matthew Perry landed with his fleet of nine steamships in the Bay of Edo (today: Bay of Tokyo; before the later Yokohama), he forced Japan, which had been almost completely isolated up to that point, to open up. This made the place a central hub for international trade.

The geographical location (about 30 km south of Tokyo) made it appear to the Shogun as an ideal place for a settlement of foreigners. The first isolated settlement for foreigners called The Bluff was built on an island . British, American and Dutch garrisons were formed at the same time. At the beginning, individual foreign consulates were housed in temples.

In the following years, buildings were built here for the branches of foreign companies, which still characterize the cityscape in the port area. In the Meiji period , the trade and production of silk was an important industry. In 1872 Japan's first railroad ran between Tokyo and Yokohama. On April 1, 1889, Yokohama received the status of a large city ( shi ) when modern local authorities were introduced .

In 1923, the city, like neighboring Tokyo, was badly damaged by the Great Kanto earthquake . In 1942 the population exceeded the million mark.

During the Second World War , the city was bombed twice with napalm bombs by the United States Army Air Forces (USAAF) in April 1945 and May 1945 . The attacks destroyed around 57% of the urban area, leaving 4,832 dead and 17,967 injured. The attacks were 22 km 2 of the city burned down. (see air raids on Tokyo )

In 2002, Yokohama hosted the final of the soccer World Cup between Brazil and Germany .

The former manager Fumiko Hayashi has been the mayor of Yokohama since 2009 . She was re-elected for a third term in 2017 with LDP-Kōmeitō support against the former Democratic lower house deputy and mayor of the neighboring city Zushi Kazuyoshi Nagashima and the CPJ- LP-supported former city councilor Hirotaka Itō. Voter turnout recovered from the record low in 2013 by eight percentage points to 37%.

The Yokohama City Council ( Yokohama-shikai , 横 浜 市 会 , as in the Empire) has 86 members who are elected for four years by non-transferable individual votes - as in all Japanese communities . The 18 districts serve as constituencies. In the last election in April 2019 , the Liberal Democratic Party (LDP) emerged as the strongest party with 33 seats.

The 18 districts of the city of Yokohama, which act as constituencies, elect 41 of the total of 105 members of the parliament of the Kanagawa Prefecture.

The city ​​directly elects eight members to the lower house of the national parliament in the constituencies Kanagawa 1 to 8, with constituency 4 also extending to the south-western suburbs of Yokohama. In the 2017 general election , five seats went to Liberal Democrats, including two cabinet secretariat chief Yoshihide Suga in the Kanagawa constituency, Kanagawa 4 and 6 to Constitutional Democrats and 8 to Kenji Eda from the Democratic Progressive Party (without a party nomination, now part of the KDP parliamentary group).

As one of the original "six major cities" (roku daitoshi) of the empire, Yokohama has been divided into districts ( ku ) since 1927 . In 1956 the city of Yokohama was one of the first five "major cities by government decree" .

The table below gives an overview of the current 18 boroughs of Yokohama.

There are 161 railroad stations in the city, including 39 on the Municipal Subway.

Furthermore, 1270 bus stops are served in the city area. 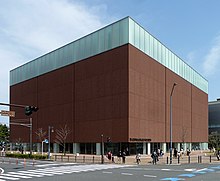 There are 42 museums in the city area

Other statistics on demographic and social issues

The city has significant commercial enterprises in the shipping , biotechnology , electronics and semiconductor industries .