Shogun is a redirect to this article. Further meanings are listed under Shogun (disambiguation) . 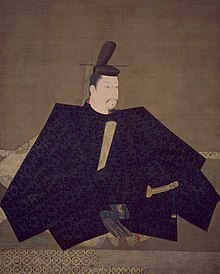 Minamoto no Yoritomo , the first shogun of the Kamakura shogunate

Shogun , also Shogun , ( Japanese 将軍 , full title: 征 夷 大 将軍 Seii Taishōgun , in about " barbarian subjugating great general / generalissimo ") was from the 12th century to 1867 a Japanese military title for leaders from the warrior nobility of the samurai . Originally, a shogun was roughly equivalent to a European duke and was only temporarily appointed to this position, which was provided with special powers, in emergencies in the fight against the Emishi . After the end of the Heian period , Minamoto Yoritomo succeeded in having this title inherited by the emperor in 1192 .

The shogunate initially only referred to the household, later also the administrative apparatus of the shogun. In Japanese it referred to itself as kōgi ( 公 儀 , literally official affairs , meaning "central government"); From the 19th century it was called bakufu ( 幕府 , lit. tent government in the sense of " military government ") as a demarcation from the imperial court, which was increasingly viewed as sovereign . The bakufu remained the dominant political center of the country until it was abolished after the defeat of the Tokugawashogunate in the Boshin War in the course of the Meiji Restoration in 1868, together with the corporate state that had existed until then.

Around 1150, power in Japan was in fact in the hands of the monastery emperors , officially abdicated regents, who left the incumbent Tennō only representative tasks. This resulted in clashes between rival families of the high nobility. The monastery emperor resorted to the support of some samurai families, but after the victory turned out to be less grateful than these families had wished. This led to the Gempei War (1180–1185), after the end of which the samurai of the Kamakura region had effectively taken power in Japan. On August 21, 1192 Minamoto no Yoritomo (1147-1199) was appointed by the Tennō to Seii Taishōgun , with which the Kamakura shōgunate was founded. The title of Shogun was inherited by the successors, and the city of Kamakura became the seat of the Shogunate. The provinces were placed under the supervision of the Shugo , the predecessors of the later daimyo . These were chosen from powerful families or the title was bestowed on a general after a successful battle.

After Minamoto's death in 1199, the clan of his widow Hōjō Masako took power. The Minamoto remained the shoguns, while the Hōjō exercised actual power in the background. The emperor tried to end this situation in the Jōkyū war . The rebellion was unsuccessful and the Hōjō consolidated their influence, so that it was possible for them to appoint the successor of the Shogun themselves.

In 1274 and 1281, the shoguns fended off two attempts at invasion by the Mongols under Kublai Khan . Traditionally, the samurai demanded rewards for their service. Since no spoils of war were lost through the defense of the country, the shogunate could only grant them to a small extent.

In their displeasure, the Ashikaga and the Nitta clan in particular turned more to the emperor. This finally made the Tennō Go-Daigo (1288-1339) use to overthrow the shogunate in 1333 and begin a restoration of imperial power (the Kemmu restoration ), which only lasted a few years, mainly due to different Interests of Go-Daigo and the Ashikaga. 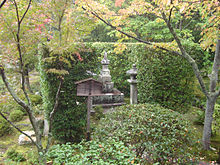 Ashikaga Takauji, who resided in the Kyōto district of Muromachi, became a shogun in 1338 and thus founded the Muromachi - or Ashikaga shogunate . He is considered an opportunist who constantly adapted his behavior to the current situation, and one of the most controversial figures in Japanese history. The following period was marked by a loss of power in the central government, during which the rural samurai grew stronger. The weakness of the shoguns led in 1467 under Ashikaga Yoshimasa (1436-1490) to the 11-year Ōnin war . Thereafter, both the Shogunate and the Tenno had become politically insignificant. The period beginning with the Ōnin War became the "Period of the Warring Provinces" ( Sengoku Jidai , 1467–1568).

After Portuguese traders introduced firearms to Japan in 1543 , Prince Oda Nobunaga (1534–1582) used this new technology to force unification of at least central Japan. After the pacification of his own province of Owari Nobunaga also raised claims to neighboring provinces and in 1568 marched into the capital Kyōto. Initially he supported the 15th and last Ashikaga shogun Ashikaga Yoshiaki (1537–1597), but after disloyalty in 1573 he removed all offices, with which the shogunate became extinct.

The Muromachi Shogunate was followed by the Azuchi Momoyama period (1573-1603). Oda Nobunaga united 30 of the then 68 provinces, but died of treason in 1582 without founding a new shogunate. In the fight for Nobunaga's successor, the military leader Toyotomi Hideyoshi (1536–1598) , who came from a humble background and was one of the most outstanding figures in Japanese history, prevailed. He reformed the empire in favor of the samurai.

After Hideyoshi's death, Tokugawa Ieyasu (1543–1616) , who came from eastern Japan and is still venerated in a large number of Shinto shrines , came to power. Ieyasu was appointed the new Seii Taishogun by the Tennō in 1603 . Compared to foreign states, the Shogun with the title Taikun ( 大君 , dt. "Great Lord") was referred to, to which today's tycoon goes back. He built an administrative center in the previously insignificant fishing port of Edo (today's Tokyo ), which became the de facto capital of the shogunate and gave the Tokugawa shogunate the name of the Edo period . His successors completed the unification of the empire, and Japan experienced the longest uninterrupted period of peace in its history among the 15 Tokugawa shoguns. At the same time, however, the country was increasingly isolating itself from the outside world: Strong trade restrictions and an absolute ban on traveling to Japan and an entry ban on foreigners (with the exception of small branches on the island of Dejima off Nagasaki (Dutch and Chinese), the island of Tsushima (Koreans), and the port of Satsuma (for trade across the Ryūkyū Islands ) led Japan into isolation.

The organization of Edo-Bakufu under the Shogun was simplified as follows:

The end of the Edo period was heralded in 1854 with the arrival of a US fleet under Commodore Matthew Perry (1794-1858). Based on the military superiority through superior firearms ( gunboat policy ), Perry forced an opening of the Japanese empire to trade. The Shogun's indulgence led to disputes in the country: The Tozama Daimyō and the court nobility under the leadership of Iwakura Tomomis campaigned for a restoration of the Empire under the slogan “Honor the Emperor, drive out the barbarians!” ( Sonnō jōi ). In a coup d'état they forced the Shogun Tokugawa Yoshinobu (1837-1913), who had ruled since 1865, to give up after only two years of reign in 1867. Yoshinobu revoked this in early 1868, but was defeated in the battle of Toba-Fushimi (south of Kyoto) despite the numerical superiority and finally abdicated. The victorious side helped the only 15-year-old Tennō Mutsuhito (1852-1912) to his full rights as head of state. Meiji (such as the enlightened government ) was chosen as the imperial government motto for the new era . The restoration of imperial power is called the Meiji Restoration , even if the reformers were by no means concerned with restoring the old system, but rather with reorganizing Japan on all levels into a nation that could cope with the strong West. The new catchphrase was now “Japanese spirit - western knowledge!” ( Wakon yōsai ).