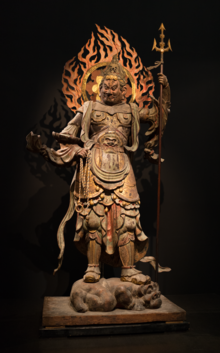 The foundation stone of the golden Heian period was laid in 794 when the imperial court was moved to the Heian Palace (Daidairi) in Heian-kyō , today's Kyoto . With the move, relations with the Chinese Empire waned , which corresponded to a stronger internal concentration.

At the court of Heian, Japanese culture, art and customs were brought to extraordinary refinement. The Heian period is considered to be the classic period of Japanese literature , which was especially cultivated by court ladies. The so-called court ladies' literature include z. B. the Genji Monogatari of the lady-in-waiting Murasaki Shikibu and the pillow book of the lady-in-waiting Sei Shōnagon . In addition, the diary narratives ( nikki ) developed; On imperial orders, anthologies of poetry ( Chokusenwakashū ) were compiled. Two important examples are the Kokin-wakashū and the Manyōshū . At that time, the Sakumon Daitai was a Japanese poetics.

Since the Chinese script was at that time the only way to write something down, and learning it was considered improper for women, the literature of the court ladies of the Heian period also led to the development of a new syllabary, which was initially called onna-de (women's hand) and later canonized as Hiragana .

As court culture flourished, the emperor's power declined and flowed to the Fujiwara family , who gained influence through their skillful marriage policies. They married their daughters to the emperors and then ruled on behalf of their underage descendants. A particularly powerful member of the Fujiwara family was Fujiwara no Michinaga , who married four of his daughters to emperors (see also marriage and partnership in the Heian period ).

The existence of several centers of political power is characteristic of the Heian period, as the existence of different imperial courts, each with their own entourage, was not unusual. There were very many different offices and grades that had been created on the Chinese model, but were rarely associated with real power. The most important of these were the Regent for an Underage Emperor ( Sesshō ) and the Grand Chancellor ( Kampaku ). In 1086 the office of ex-emperor ( insei , German government from the monastery ) was introduced.

Gradually, the Taihō method of land surveillance had to give way to a kind of private property, the shōen . Private land ownership grew more and more through inheritance, donations and the development of new arable land. The imperial court lost control of the land and thus control of money (rice was the currency at the time). The shoên owners built private armies for local protection. This led to the rapid rise of the warrior class.

In the middle of the 12th century the power struggles between the rival nobles increased and the problems also increased due to the Buddhist temples, which made demands. Attempts to resolve conflicts were now also military. The most important warrior clans were the Genji ( Minamoto ) and the Heike ( Taira ), who could derive their origin from the imperial family. When at Heiji no Ran the Minamoto under the leadership of Minamoto no Yoshitomo kidnapped the Tenno in order to seize political power, they were crushed by the Taira under Taira no Kiyomori . Years later, when the Taira had established their power by marrying them into the imperial family, the Genji rose again and the Gempei War broke out. Under Minamoto no Yoritomo , who had been spared by Kiyomori because of his youth, his half-brother Minamoto no Yoshitsune fought numerous battles against the Taira. With the sea ​​battle of Dan-no-ura the rule of the Taira ended: the child emperor Antoku died and the Taira clan was wiped out. Yoritomo had Yoshitsune killed and was appointed sei-i-tai-shogun ( Supreme Commander of the Army for the Expulsion of the Barbarians ) in 1192 . He established a military administration, which had its center in Kamakura and was called Bakufu .