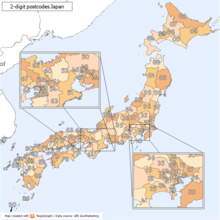 The system of postal addresses in Japan ( Japanese 住所 , Jūsho ) is not based on street and house number , but on administrative units and is derived from the historical classifications for the taxation of self-governing areas.

The addresses contain the following components in descending order of size with the respective appended category names:

Japanese postcodes ( 郵 便 番号 , Yūbin-bangō ) are seven digits long , with a hyphen between the third and fourth digits. The Japanese Post symbol (〒) is often placed in front of forms.

A village or a district can be divided into 大字 ( ōaza ) and these in turn into 小字 ( koaza ), or 字 ( aza ) for short . In contrast to the other identifiers, these are placed in front of what is designated, but are often left out.

In some cities, the city sections not with chome , but with the Iroha system in Hiragana + 部 / bu (in the Ishikawa Prefecture ) or sky strains (. Eg in Tosa numbered).

The district section chō ( 丁 ) of -chōme ( 丁目 ) is still an administrative unit of importance today. Each chō selects an elder from among around 100 residents who feels responsible for his section and who has the appropriate contacts.

If the address for international mail is written in the Latin script (Japanese: Rōmaji ), the Japanese Post recommends that the order of the components be reversed; H. to be used in the international order. The country is noted in a further line following the address.

In Japan, streets mostly have no names, so that the addressing is not done according to lines (streets, paths, etc.), as is usual in Europe, but according to areas enclosed by these and natural obstacles (e.g. rivers). For this purpose, there are two systems for addressing within a district: according to parcel and according to building blocks.

The parcel system goes back to the Meiji period . It has its origins in the chiken seido ( 地 券 制度 , German: " Basic Certificate System"), which was introduced in 1871 for the purpose of taxation , in which every property also received a code and was thus addressable. In 1886 a " land register system" was implemented ( 不動産 登記 制度 , fudōsan tōki seido ). In 1898, when the "Personal Status Act" was revised ( 戸 籍 法 , koseki -hō ), the term banchi was first used to address the main residence ( 本籍 , honseki ).

In the parcel system, the parcels ( 番地 , banchi , also: 番 , ban ) of a district are numbered consecutively. When the parcel is divided up, another sequential number is appended to it, previously often separated with a の . The addresses 123 番地 の 1 , 123 番地 1 and 123 番 1 are therefore equivalent and refer to the first sub-parcel of the 123rd parcel. If this parcel has n sub- parcels and one of them is split into m , no further number would be appended to the existing sub-parcel number, but new sub-parcels would be counted, so that there are then n + m - 1 sub-parcels, as in the following graphic shown:

The parcel system has several disadvantages. On the one hand, it is similar to conscription numbers , with the same disadvantage that the number of a sub-parcel and thus the address of a building depends on the time it was built and not on its position, so that a specific address is difficult to find. On the other hand, there can be several buildings on one parcel, all of which then have the same address.

Therefore, a new system was introduced in May 1962 with the "Law on Housing Information " ( 住居 表示 に 関 す る 法律 , jūkyo hyōji ni kan suru hōritsu ). A district is then divided into building blocks ( 番 , ban ), which are separated from each other either by streets or by natural obstacles such as rivers. Within this building block, a number ( 号 , gō ) is assigned clockwise at fixed intervals (e.g. 10 m) . A building whose entrance is at this number is then assigned this, see the following graphic with four buildings in a block and their house numbers:

The numbers within the district or the rural community are mostly given without category features and only separated from each other by a hyphen, i.e. H. instead of 1 丁目 2 番地 3 or 1 丁目 2 番 3 号 , they often just write 1-2-3.

For example, a letter to the President of the Japanese Post Office in Tōkyō would have the following address information written in Kanji , Rōmaji and the usual international notation (category information in bold).

In the special case of Tōkyō, no city is specified within the 23 ku area :

In Kyōto there are very numerous and very small districts, some of which are also present several times within one district. Therefore, in addition to the official address system, a second one that is also recognized by the post office has become established.

The official address of the Kyoto Tower is:

and thus refers to the south of the Karasuma-Shichijō intersection.

In the case of less prominent buildings, the official address is also added.

In Hokkaidō, the city center of some major cities is divided into quadrants. Addressing takes place here by specifying the distance between these quadrants and the city center along a north-south and an east-west axis in the form ○ 条 × 丁目 . The suffix jō ( 条 ) is used for the north-south indication and chōme is used for the east-west indication , which differs in its meaning from other municipalities in Japan.

The Sapporo Town Hall address is:

and thus stands for the first house in the first block in the 1st quadrant north and 2nd quadrant west of the city center in the Chūō-ku district of Sapporo.

In some communities in Ishikawa Prefecture , the district sections are numbered consecutively not with Arabic numbers, but with Hiragana according to the Iroha order and bu ( 部 ) as an optional category specification.

The town hall address of Nomi is:

and stands for the 35th property in the 16th ( ta ) district section of the Terai-machi district in Nomi.

In some communities in Iwate Prefecture , the districts of Ōaza or Aza are not named, but numbered in the form 第 ○ 地 割 , where 第 dai is an ordinal number prefix and 地 割 chiwari means a parcel.

The Fudai Town Hall address is:

and thus stands for the second house in the 13th block in the suburb of Dōya of the 9th district ( Ōaza ) of Fudai in the district of Shimohei.

When the numbering refers to an aza , it corresponds to the chōme in other areas of Japan and is written in the appropriate short form. An example of this is the address of the Karumai City Hall :