Kōri is a redirect to this article. For further meanings see Kori . 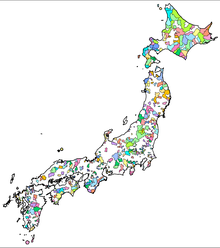 gun in Japan (as of 2007). The rest are shi and the special districts of Tokyo .

A district or district ( Japanese 郡 gun , historically kōri ; English district or less often county ) was a local administrative unit in Japan . As such, it was used since antiquity and from 1878 to 1921 as an administrative level between prefectures and urban ( Machi ) and rural communities ( Mura ) belonging to a district, after it had been supplanted by feudal hierarchies without formal abolition. In 1942 it was de facto reactivated for the last time by decree of the then Interior Ministry in almost all prefectures (except Hokkaidō ) in the form of so-called regional offices ( chihō jimusho ) and finally abolished in 1947. It roughly corresponds to the county in the USA or the county in Germany.

The counties were originally called kōri and as such had ancient origins in Japan. Although the Nihonshoki claims they were set up during the Taika reforms , kōri was originally written as 評 . It was not until the Taihō Codex that kōri came into use in the form 郡 , which in China referred to command offices ( jùn ). Under the Taihō code, the hierarchy of administrative units was: province ( 国 , kuni ), county kōri and below that the village ( 里 or 郷 , sato ).

Etymologically, the spoken words gun and kuni are related to one another or were taken over into Japanese at different times from different language levels of Chinese - Middle Chinese and Old Chinese . Kōri ( spoken in old Japanese kopori ) is also a loan word, here from Baekje Korean. 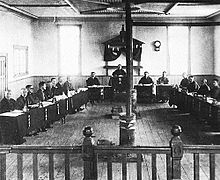 During the modernization of the administration in the Meiji period according to western models, the districts were reorganized in 1878 and 1890 based on the model of Prussian districts (English districts , dt. "District" or "district") and received district administrations appointed by the Ministry of the Interior and indirectly elected District days (gunkai) . In order to strengthen the local self-government of the communities with their elected institutions, the Hara cabinet decided in 1921 to abolish the counties - the dissolution of the counties and administrations followed a few years later. The party politician Hara had already pushed for abolition in the 1900s: While the district heads appointed by the Interior Ministry were close to the supporters of the party opponent Yamagata Aritomo , the municipal institutions were a stronghold of the bourgeois parties.

As a geographical and statistical unit, the gun has outlived its formal abolition. They are still used today in the Japanese address system to identify the location of cities and villages. In many places, the constituencies for prefecture parliaments also follow the district boundaries to this day. The composition of the districts is continued today: If a town or village community [historically belonging to a district] becomes part of a - shi (district-free town), it is no longer included in the district. As a result of the major territorial reforms since the Second World War, during which the number of -shi almost quadrupled by the early 21st century, many districts have disappeared from the map or been reduced to individual communities.

Districts of the same name in Hokkaidō

In each of the provinces of Japan each name was given to a gun only once. Since the prefectures essentially follow the boundaries of the old provinces, there is only one name for a gun per prefecture even today.

The situation is different, however, in the Hokkaidō , which was initially set up in the 19th century as the eighth -dō with eleven provinces as a modern addition to the ancient 5-ki-7-dō system (5 provinces near the capital and 7 outer imperial districts with their provinces) later, however, was regarded as a prefecture equivalent to -ken and -fu :

There are also four counties that belong to two sub-prefectures: